Many colonies and localities surrounding the lake have been inundated as the lake overflowed after the recent heavy rains in Hyderabad. 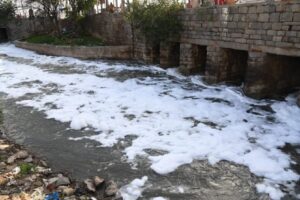 Amid the heavy rains in Hyderabad over the past couple of days, the areas surrounding Saroornagar lake have been among the worst-affected, with the lake overflowing and inundating surrounding areas. In fact, the lake was seen spewing foam, as the frothing lake water continued to overflow into the nearby residential neighbourhoods.

Greater Hyderabad Municipal Corporation (GHMC) Mayor Gadwal Vijayalaxmi visited the flooded localities around Saroornagar lake. Singareni Colony, Tapovan Colony, Sai Nagar and Green Park in Saroornagar were among several other localities in the low-lying areas of the city that were flooded along with parts of Dilsukhnagar and Uppal.

Chemical foam and sticky substance, the lake was seen accumulated in some places, and also scattered across the streets filled with the lake water. Residents were seen wading through knee-deep water filled with foam particles. The frothing lake water has left residents anxious and worried. A residents of Dingareni Colony and Sharadanagar told #KhabarLive that the lake water that has entered their homes has brought an unpleasant stench, and is causing various illnesses. Saroornagar received 14 centimetres of rainfall on July 14, according to the Indian Meteorological Department (IMD). 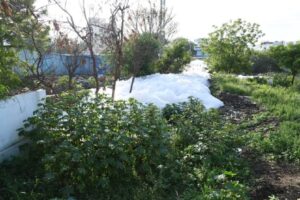 GHMC Mayor Gadwal Vijayalaxmi visited the low-lying inundated areas in Gaddiannaram division of Saroornagar along with Gaddiannaram Corporator Prem Maheshwar Reddy. The mayor visited Tirumalanagar and other surrounding areas, too, where the nala (stormwater drain) had overflown.

Officials said that the nala would be fixed within the initial phases of the Strategic Nala Development Plan (SNDP), a wing of GHMC set up to avoid flooding in Hyderabad for the long run. Saroornagar was also among the areas badly affected by the 2020 Hyderabad floods, with the area receiving 94% excess rainfall during the monsoon last year, according to data from the Telangana State Development Planning Society (TSDPS). #KhabarLive #hydnews