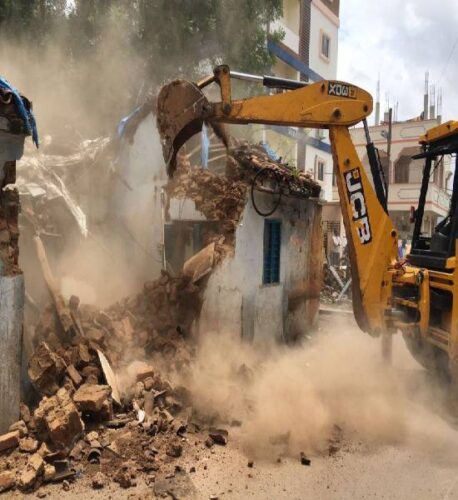 The huge income from construction waste of Greater Hyderabad Municipal Corporation (GHMC) is being undermined by Ramky Enviro Engineers, one of the private agency which has bagged the contract for processing construction and demolition (C&D) waste.

This is mainly due to weigh bridges showing 50–80 metric tonnes (MT) excess of C&D waste. The private party has been monetising the excess weight and claiming bills.

Ramky Enviro Engineers has been awarded the work pertaining to “collection, transportation, processing and management of construction and demolition waste in GHMC” on public-private partnership (PPP) at plants located in Fathullaguda and Jeedimetla. The contract is for 25 years with a tipping fee of `342 per metric tonne, the estimated fee being `3 crore per annum from each plant, which can process 500 MTs of waste each.

“As of today, GHMC generates about 1,200 MTs of C&D waste per day. To improve efficiency of collecting C&D waste, GHMC is launching a dedicated App for citizens, private contractors and bulk waste generators. There is also toll free number 1800 120 1159 for collecting C&D waste from source,” principal secretary Arvind Kumar had said at a C&D waste management workshop in second week of July.

A week later, Enforcement Vigilance and Disaster Management (EV&DM) team of GHMC, along with an officer of legal metrology department, jointly inspected dumping yards and weigh bridges with loaded lorries in forward and backward directions. The Medchal-Malkajgiri district legal metrology office submitted a report to the EV&DM director that weighing bridges / machines have shown abnormally excess difference in weight of solid waste at Jeedimetla and Fathullaguda dumping yards.

ALSO READ:  The Reality Of 'Gemstones' And it's  Use In Jewellery

An error of 50 kg and 80 kg had been found in weigh bridges at Fathullaguda and Jeedimetla respectively. No violation had been found at Jawaharnagar dumping yard.

The office of Controller, Legal Metrology, Jeedimetla, recorded excess weight of 704.56 MT and at Fathullaguda plant, the excess weight was 512.85 MT until June 27, 2021. The office recommenced deduction of amount for excess weight from the figures of two plants. Surprisingly, all three plants are maintained by the same agency. Irregularities have taken place only in the recently inaugurated plants.

When queried about the amount to be repaid by the agency, some of the GHMC officials refused to comment. A few said they are unaware of the issue.

This is just a tip of iceberg. This entire episode is being organized in nexus with officials and contractors to loot the cash strapped corporation. #KhabarLive #hydnews