The KCR govt’s health bulletin said Telangana recorded 10 Covid deaths in 24 hrs. But Hyderabad alone saw 100 funerals in a day, and this is just at crematoriums and not cemeteries or grave yards. 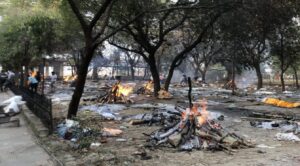 Amararender Rao, 40, who works at one of the Hyderabad’s cremation ground, had never seen “so many dead bodies”. The raised platform on the premises for funerals that would earlier see few pyres has no place for any one to even stand now, he said, adding: “It’s dead bodies all over.”

On Thursday, when #KhabarLive reached cremation grounds around 6 pm, four young men were stacking up logs of wood on one side of the ghat to prepare a row of funeral pyres for the next round of Covid cremations. They were not wearing proper PPE suits. Over 30 pyres were already burning, and more bodies were waiting to be consigned to flames.

Among the bodies due for last rites was that of Narsaiah. The man in his late 40s had only complained of “fever and body ache” before he died, his relative said. “We took him to every hospital we could reach, but he died,” said the relative, one among the hundreds present at the ghat to say final goodbyes to their loved ones.

He didn’t know if Narsaiah had Covid, for the latter died before a test could be done.

“Jo jinda hain, unke test ke result to aa nahin rahe, dead ka kahan se test karaate (Test results of those alive are not coming on time, where is the question of the dead being tested),” the relative said.

Narsaiah was cremated on a pyre meant for non-Covid bodies.

Additional Health Secretary did not respond to #KhabarLive phone calls and messages for comments, but many government officials, requesting anonymity, said the number of deaths has risen. They also said there is “lack of medical attention on time” because of which people are dying, and that not all patients are being tested so it can’t be said for sure that all “non-Covid” funerals at crematoria are actually.

While the crematoria were following protocols at the sections where Covid funerals were taking place, with GHMC officials conducting inspection throughout the day and workers sanitising the area from time to time, the non-Covid sections appeared to be casual, with people there less bothered about protection and sanitisation and more concerned about their number in the queue.

And this is only the scene at the city’s cremation grounds. Hyderabad also has several Christian cemeteries and nearly 150 big and small Muslim burial grounds, and the situation there is not much different.

The ground reality at cremation grounds authorised for Covid funerals, is in stark contrast to the Telangana government’s health data. On 15 April, KCR government’s health bulletin said the state recorded 10 Covid deaths in the last 24 hours, with Hyderabad accounting for 6 of them.

However, the data accessed by #KhabarLive from the crematoria tells a completely different story.

Until 6 pm on 15 April, the  crematoriums had reported 108 Covid bodies.

A day before, on 14 April, the number of Covid bodies cremated was 101 against the government data of only 14.

ALSO READ:  'Gandipet Aka Osmansagar' Recaptures Past Glory As The Lake Boasts Of Healthy Reserves And Constructive Plans

On 13 April, as many as 84 Covid bodies were cremated in Hyderabad but government data said only 18 such deaths occurred. The corresponding figures for 12 April were 92 and 21, respectively.

Muslim Kabristan or grave yards in Hyderabad, has seen over 350 bodies since 1 April, and staff working there said the numbers have “tripled since last month”.

Sharing the figures, a member of the committee that manages the functioning of the graveyard said they did not receive too many Covid bodies in February and March but have buried 22 such bodies since 1 April, but what is more alarming is the high number of “non-Covid bodies” that they have been getting for the last few days.

These Kabristan was crowded when #KhabarLive visited the place Friday afternoon, with a long queue of people still waiting for their turn to bury their dead family members or acquaintances.

According to the Thursday health bulletin, Telangana has 29848 active Covid cases. Hyderabad continues to be the worst hit in state as the tally reached 25,865 Thursday, with 5,183 fresh cases reported in last 24 hours.

#KhabarLive tried to reach Additional Health Secretary through phone calls and messages for comments on the data mismatch on deaths but they did not respond.

GHMC Commissioner said, “The authorities concerned will be able to comment on the data, we are (only) monitoring the cremation of Covid dead bodies.”

An official of GHMC told #KhabarLive, on the condition of anonymity: “Ever since the viral video saying people are dying on roads went viral, many authorities become silent. All the public outrage is now directed towards GHMC Commissioner, who is assigned the duty of monitoring Covid cremations.”

He added: “We are already running out of funds. On top of that, we have to spend Rs 8-10 lakh every day for pyre wood. We are ordering 5 quintal wood every day.”

Not only Covid bodies, the cremation grounds are also witnessing an overwhelming number of bodies in general, according to the staff. #KhabarLive spent a few hours each at crematoriums,  cemeteries and grVe yards and saw a new body arriving every 10 minutes.

One of the employees at the crematorium told #KhabarLive: “We are overworked. After Holi, the numbers started increasing. I had not taken a holiday since last year. But just as I thought of taking one, almost 60-65 bodies started coming in every day.”

Pointing towards his injured leg, he said: “I met with an accident, but I cannot rest. These are not ordinary numbers. Some people had to wait for 5-6 hours to cremate the bodies they brought. Earlier, the average number was 20-25 a day. Last one week saw a massive surge in the non-Covid bodies too.”

And no one knows if these were Covid-infected bodies.

A senior official from GHMC, who did not wish to be named, explained: “Even we are shocked to see these figures. We aren’t releasing them (the numbers) to the media but it is not an ordinary situation. Many of them (patients) are complaining of pneumonia. Some of them did not get an ambulance, some were turned away by the hospitals. They died because of lack of medical care. The numbers have jumped 2.5 times higher. Their tests are not being conducted, so we don’t know if they were infected with the virus or not.” #KhabarLive #hydnews