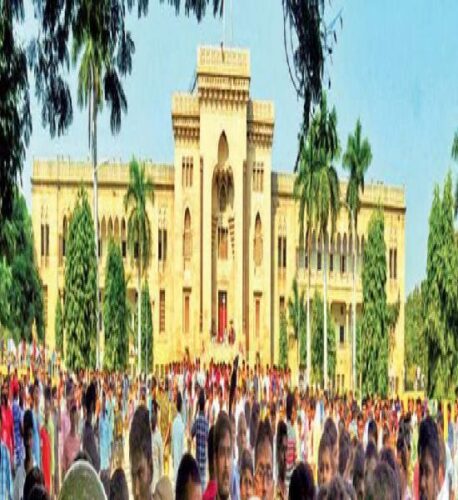 It’s unfortunate to know that a prestigious,  unanimously powered Institution in Hyderabad is following the unscientific and unconcerned subject ‘Cow Science’ forcibly to students. Several students across the several departments alleged that University literally, forced to teach the ‘new subject’ to all students.

Many unscientific claims have been made about cow urine or anything associated with the bovine being useful in treating Covid and Cancer ailments. And many of those claims have come from none other than people from the ruling Bharatiya Janata Party (BJP) and it’s allied.

And the cow piss obsession seems to have reached Osmania University, where students, much to their unwillingness, are being forced to study this balderdash in the syllabus of a legitimate subject under the pretext of ‘Essence of Indian Traditional Knowledge.’

Until now, unscientific claims regarding ‘gau mutr’ (cow urine)’ and other such things was mostly relegated to Whatsapp forwards, which are a haven for right wing (read Hindutva) propaganda.
A few students of Osmania University reached out to #KhabarLive and shared the infelicitous syllabus they have in ‘Essence of Indian Traditional Knowledge,’ a zero credit subject they have to pass otherwise they get a backlog.

A few preternatural facts that these helpless students are being forced to study are topics like ‘benefitting from the Cow’, which claims that the “medical fraternity has recently woken up on the potential therapeutic value of cow products and Pancha gayyas(urine, dung, milk, curd, and ghee) cure skin diseases, urinary problems, knee pains, ulcers, cancers, tuberculosis, etc,”
The syllabus laughably went on to claim that America and Africa used the ‘pancha gayya’ for treating aids and as bio-enhancers.

ALSO READ:  #InsideKhabar: Behind The Story Of 'Political Drama' On 'Raids And Searches'

One of the students from Osmania University, who did not want to be quoted, said that they are being exacted to memorize all the Surya Namaskaras, standing, on the stomach, and on the back. He told #KhabarLive, “The blatant indoctrination of religious texts and beliefs under the pretext of ‘Essence of Indian Tradition and Knowledge’ is unacceptable considering the diverse history and culture of India.”

Another student said that this type of indoctrination is a clear violation of the pluralistic and diverse nature of Osmania University. Furthermore, he added that they are being coerced to study the exaggerated benefits of Yoga and how it is superior to other forms of exercise, which is debatable.

The instructor of the subject A.S.Chary, said that Yoga and traditional education have been introduced for engineering students to help them become more focused on studies. He added that this will also help the students lead a mentally and physically healthier. Chary said that he doesn’t know about the subject which includes topics on cow science and said that someone else is teaching it.

Many students across the State protest this unfair attitude of University. Many teaching staff to amazed to see this mandatory imposition of a new unprescribed subject. #KhabarLive #hydnews