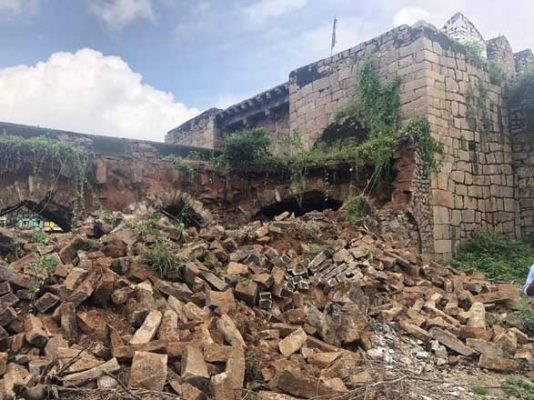 Multi-arched structure is an attachment to Golconda Fort architecture. A portion of the Moti Darwaza (gateway) of the 500-year-old Golconda Fort collapsed in the heavy overnight rain. “It is not part of the main wall. It is an old attached structure measuring 11.3 metres by 5.6 metres. We were informed about the incident and our officials did an inspection of the site,” said Archaeological Survey of India Superintending Archaelogist Milan Kumar Chauley. “It had red earth mortar which became weak over the past few days and collapsed on Friday morning,” he said, adding the department will rebuild the structure after a few days.

A team of the officials of the ASI visited the site and inspected the collapsed structure. Officials said it got weak over a period of time and collapsed.

The structure was built with red sandstone blocks and might have given way due to the heavy rains. It may be recalled that in December 2014 the Moti Darwaza had caved in. The officials later repaired it.

Meanwhile GHMC Additional Commissioner Musharaff Ali Farooqui said the GHMC would provide necessary support for the restoration. He asked the ASI to take up restoration immediately.

“It collapsed in the night and people heard a loud sound,” said Habeeb, a resident of the Golconda Fort.

In the morning, people discovered that the roof and the rear wall inside the gateway had collapsed.

No one has been injured in the incident and police cordoned off the area.

“It was a multi-arched structure like a guardroom and we used to lock it up. But the local residents would break the lock and start using it,” said the ASI official.

While the rest of the fort wall and the bastions are built with granite with lime mortar, the collapsed structure was built with dressed red sandstone blocks.

Occurring on World Tourism Day, the incident spotlights the neglect of the Golconda Fort. #KhabarLive

Slut-Shamed By Landlady, Thrashed By Landlord In Bangalore