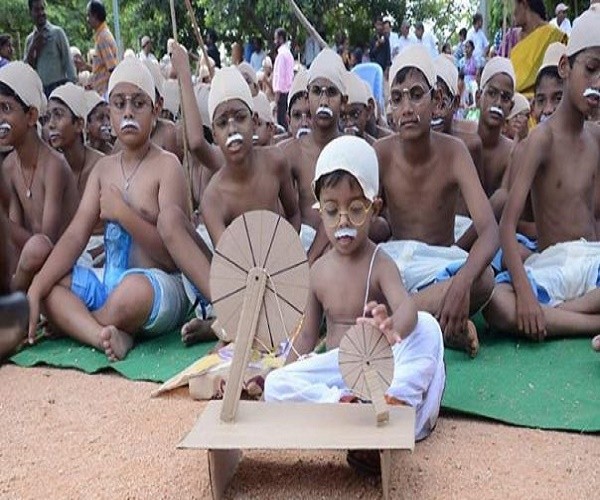 Birth anniversary celebrations of Mahatma Gandhi organised by Gandhi Global Family and Gandhi Gyan Pratishtan made its way to Guinness Book of World Records with 5,500 students dressed as Gandhi participating in the event. All the students wore the trade mark attire of the father of the nation – dhoti, round shaped eye-glasses and walking stick.

In all, 5,500 students from different schools in the district participated in Gandhi Jayanthi celebration organised at NG College Ground in Nalgonda town. It took them more than two hours to assemble at the venue.

The audience was enthralled when all the students dressed up as Gandhi stood up and recited ‘Raghupati Raghava Raja Ram…’. The students also took a pledge saying they would follow peace and truth, and work for the propagation of these Gandhian principles.

ALSO READ:  'You Are Not An Indian National' - The 'Scariest Notice' Slapped To Aadhaar Holders In Hyderabad

The entire event was photographed and recorded to be sent to the Guinness Book of Records office. Each student dressed up as Gandhi was given a serial number to get the accurate figure of the participants in the event.

Gandhi Global Family chairman Rajesh said that the objective of the event was not only to enter Guinness Book of World Records, but also to spread awareness among students about Gandhian principles like truth and non-violence.

Congratulating the students for the record performance, Mahatma Gandhi University (MGU) Vice-Chancellor Prof Khaja Althaf Hussein said it was a proud moment for every citizen of Telangana.

ALSO READ:  What Are Antioxidants And How They Are Useful To Us?

The event broke the earlier record of 4,605 students who wore the attire of Gandhi in Bengaluru in 2015. Several freedom fighters and writers also attended the event. #KhabarLive