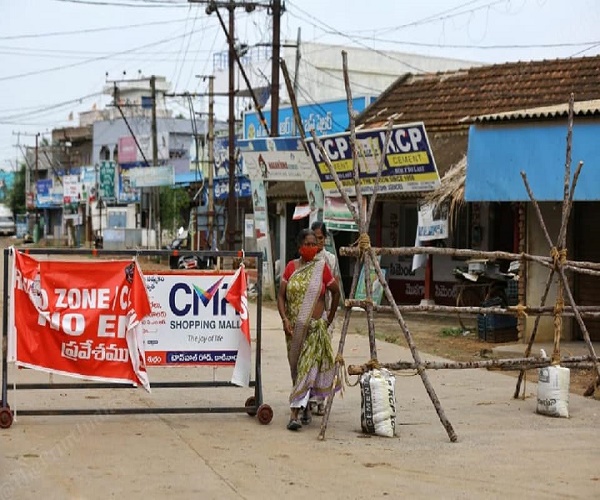 A birthday party, a cricket match, a wedding, an engagement party, and a near-complete disdain for social distancing. Gollala Mamidada, a village of 19,000 residents in Andhra Pradesh’s East Godavari district, paid a heavy price for its continued violation of the Covid-19 lockdown, with two families losing loved ones to the disease.

Of the over 500 cases recorded in the district by 18 June, over 208 have been linked to Gollala Mamidada. Within the village, meanwhile, 118 Covid-19 cases have been reported.

The number of active cases is down to 30 now, and no new infection has been reported in the past six days, but the village remains under a complete lockdown to prevent any fresh surge.

There is an eerie silence, empty roads, and closed shops when one enters the village, which lies around 24 km from Kakinada. There is no resident out on the roads, and only police personnel can be seen posted every 100 meters.

“I don’t want my children to get infected, so I am staying inside now for their good,” said a 38-year-old female resident of the village.

“We are not even stepping out for essentials,” her neighbor added from the balcony. “The panchayat sends us whatever we need.”

The East Godavari district had reported only 58-60 Covid-19 cases until mid-May before Gollala Mamidada emerged as a hotspot.

The authorities have traced the chain of transmission to Gowda Satyanarayana, 55, a freelance photographer who lived with his family at Basivireddivari street.

Satyanarayana took up a cashier’s job at Ganesh Tea Hotel, which is located in the main market of the village and owned by his friend.

Satyanarayana first suffered an illness on 12 May, but it was only a week later, on 20 May, that he got a chest X-Ray done at a local hospital. He was subsequently referred to the main Government General Hospital in Kakinada. At the facility, his sample was collected for a Covid-19 test but he died the same day. A day later, he was declared COVID-positive.

The driver of the car that carried him to the Kakinada hospital tested positive the same day, as did the two neighbors who accompanied him.

His 50-year-old wife and 19-year-old son, a college student, followed.

Once the man supplying milk to Ganesh Tea Hotel tested positive, health officials got alerted and all of Satyanarayana’s primary as well as secondary contacts were traced by local police.

This is when the authorities realized the exact depth of transmission. The family, ThePrint has learned, had thrown caution to the wind during the lockdown, and ended up infecting not only residents of their own village but also those of surrounding areas.

Between a birthday party attended by Satyanarayana in May at a local ice cream parlor, an engagement party at Chelluru village nearby where the family was guests, and a local wedding, police traced several infections.

“The case history can be traced back to 9 May as of now, since four others who attended the birthday celebration at the ice cream parlor also tested positive,” East Godavari superintendent of police Adnan Nayeem Asmi told #KhabarLive.

According to a local duty officer, those infected include two youths who played cricket with the attendees of the birthday party. Four have been traced to a wedding where Satyanarayana served as a photographer, while 36 others visited his house after his death to offer condolences to his family.

Several other employees of Ganesh Tea Hotel, including seven primary contacts, and their families (asymptomatic) also tested positive for coronavirus. Also infected were 15 patrons of the restaurant and owners of three neighboring shop owners, some of whom showed mild symptoms.

So far, according to the police investigation and reports collated by the local medical officer, the chain of transmission starting from Gollala Mamidada has affected the nearby areas of Pedapudi, Rayavaram, Biccavole, Anaparthi, Mandapeta, and Ramachandrapuram.

“Unfortunately, when we began going through details of the deceased’s contacts, nearly 65-70 people infected were members of Satyanarayana’s extended family or his neighbors,” said Dr. M. Malik, the district medical and health officer for East Godavari.

The incident, Dr. Malik added, has shed light on the repercussions of taking the lockdown lightly.

The second Covid-19 death in Gollala Mamidada was that of Anupoju Bhaskar Rao, who was among the primary contacts of Satyanarayana. He died 29 May.

Police claim to have identified 1,100 contacts of Satyanarayana so far. While those with symptoms were admitted across two key district hospitals in Kakinada, the asymptomatic ones were immediately quarantined, said Dr. T. Manikyam, the duty officer at the state government’s Covid-19 control cell for East Godavari District.

A team of the Covid-19 control cell of the district has been on duty 24/7 in the village, in three shifts, ever since the Covid-19 explosion occurred.

“We ensure that the people under quarantine or those in home isolation aren’t violating any orders,” said Dr. M. Priyanka, who works with the cell, adding that they have been conducting door-to-door surveys daily.

While the villagers have largely fallen in line, officials claim many among the elderly fail to cooperate to date. “Couples and children have been following all social-distancing measures but the aged, who are actually more vulnerable, can be difficult to convince at times,” health department official M. Praveen said.

“But we are noticing that people who were earlier taking it easy are scared, especially after two people died, which is why you don’t see people out of their homes now,” he added.

Gollala Mamidada will be under lockdown until 14 days have passed since the last case was reported. #KhabarLive #hydnews

Why Telangana Struggling To ‘Combat Covid Spread’ While AP Testing Everybody...