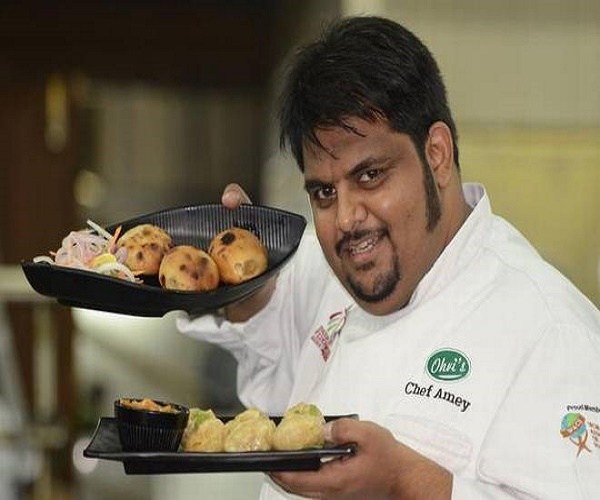 After 15 years of creating delicious meals, Chef Amey Marathe is now elbow deep in food waste. Can he convince you to join his crusade? Ever wondered what happened to the palak paneer you wasted on your plate after a restaurant meal? Or worried about how the three-day-old dal that you binned is affecting the climate? Chef Amey Marathe, who was earlier with Ohri’s group in Hyderabad couldn’t stop thinking about it all the time.

The fact that Hyderabad generates over 500 tonnes of food waste every day, according to a study by the Greater Hyderabad Municipal Corporation (GHMC), was enough to make him shift his focus from the kitchen to the bin.

Under the minimal shade of a young guava tree, Chefs Amey Marathe and Subodh Ghimire along with Sonika Tyagi, a microbiologist are fiddling with a wet-grinder. At a makeshift platform (a plastic table) in the National Academy of Agricultural Research Management (NAARM) compound at Rajendrangar, they put on their gloves and begin to squish the contents of the carry bags. If this sounds like an open air cooking demo, then you are in for a shock. The contents in the bag are food waste collected from a restaurant’s kitchen. The three are preparing to grind it to paste, so they are squishing the contents to look for non-food waste.

After separating any non-food contents, like plastic packets from it, the food waste is ground into a semi-liquid form by adding water, little by little. The paste is then emptied into a pit through hollow pipes. The pit is covered with a PVC sheet which looks like a huge stability ball. The process to turn leftovers into bio gas is underway.

Amey is looking to process at least 200 tonnes of such waste from different kitchens in the city in this manner. Around 25 restaurants and clouds kitchens have agreed to come on board.

‘This will the first commercial venture of its kind with the Government of India,’ he claims. He goes on to explain how the project began. “Methane is flammable, so it is used as a fuel worldwide. I started thinking about harnessing this gas and converting it to combustible methane. The sludge prepared by the team is used to produce methane that is pressurised and converted to combustible bio gas (CBG). The team had been working on it silently for the past couple of years before approaching NAARM.

Amey says if India can process at least 50 % of the food waste generated, it can be converted into combustible methane, cutting the country’s Liquified Petroleum Gas (LPG) need by about 25%. “This is a sustainable energy, which does not require fossil fuel, saving the environment in the process,” he says.

The driving force
Increasingly disturbing reports on climate change drove this chef, with 15 years of experience, to trade his kitchen for a waste disposal facility. “I don’t want any other city to go through Delhi’s pollution situation. I want to act on my thoughts. So I began to read more and more about what can be done to handle food waste,” he says.

Having worked in the food industry for so long, the Chef is well-acquainted with the challenge of food waste which is huge in India. According to Food and Agriculture organisation (FAO) of the UN, approximately one third of the food produced for human consumption, which amounts to 1.3 billion tonnes, gets wasted.

Amey says, “While five star hotels have temperature-controlled rooms to control the decay of discarded food until it is picked up by the waste disposal team, standalone restaurants don’t have that luxury. By the time their food gets collected, it is already rotting, emitting methane.”

a-IDEA
When Amey read about how Norway is importing wastage to convert it to methane, he began doing research on the idea, then approached the Association for Innovation Development of Entrepreneurship in Agriculture (a-IDEA), an agri- incubation for start ups at NAARM in February 2018 . “It took me more than a year to convince them that we can bring down the use of fossil fuel, eight months to convince them about harnessing enriched pressurised combustible methane with food waste at a commercial level for the first time in the country. Once convinced, we found overwhelming support. Finally we have set up two plants for our study and research at NAARM. We have three mentors — SKZ Ali, Agri Bitotech Microbiology, S Karthikeyan HoD, Bio-Energy Tamil Nadu Agriculture University Coimbatore, and Urvesh Goel, a digital entrepreneur who heads Dyzrupt.

Have their experiments been successful? “Yes, we have been making tea and instant noodles using the gas in our smaller plant on a regular basis. The canteen kitchen at NAARM has begun using the gas produced in the 25 kilograms capacity unit for their daily cooking needs ,” says Amey. The 25 kilograms unit produces around 3 kilograms of gas and meets 1/4 of the daily need of the canteen.

Of course, they’re upgrading the kitchen grinders now. Amey laughs, “We have an industrial pulveriser in place for the bigger plant. The wet grinder is just for our own research everyday.” As for the restaurant industry response? “They say, ‘take our waste,” he smiles. “They are more than willing to buy the gas if it saves both money and the environment.” #KhabarLive

Why Nizamabad LS Constituency In Telangana Forced To Use On ‘Ballot...