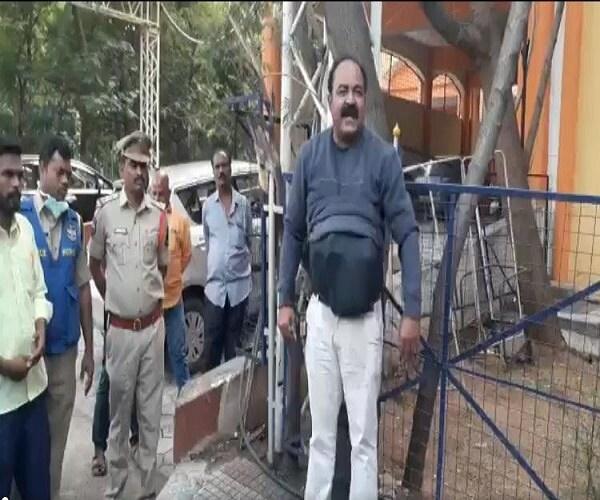 A crazy doctor at the government-run Gandhi Hospital in Hyderabad, who was suspended on charges of spreading fake news on Coronavirus, attempted self-immolate in the hospital premises.

Dr.Vasanth Kumar was reportedly suspended two days ago for allegedly spreading false news. The action was taken after a vernacular daily reported that Telangana recorded two coronavirus cases. The doctor after his suspension was asked to report to the Director of Medical Education.

However, the doctor insists that he had done no wrong, “When I did nothing wrong, why did they create such a charge? How can they punish me like this? They have been killing us. Never was treated like a doctor,” the doctor could be heard telling media persons.

ALSO READ:  Disrupting The Used Car Market; One Vehicle At A Time

Gandhi hospital is one of the designated hospitals where suspected coronavirus cases are sent to isolation wards. Telangana health officials have made it clear there are no cases of coronavirus in the state.

Upset over his suspension, the doctor reached the hospital with four petrol bottles strapped to his body under his shirt and holding a lighter. He threatened self-immolation for over an hour, all the while speaking to media and with police officers requesting him not to kill himself. His wife, also a doctor at the hospital, was present.

Though the doctor threatened the policemen and media persons to stay away from him, the police managed to foil his attempt by overpowering him and snatching the petrol bottle from him. Police personnel sprinkled water on him and removed his shirt as a precautionary measure. He was later bundled into a police vehicle and carried away.

Police officials swung into action even as Vasanth was talking to media persons alleging that injustice was done to him by the higher-ups by suspending him.

Inspector Gandhi Reddy and his team were able to snatch away the lighter from the doctor’s hands. The Hyderabad police awarded the police team Rs 10,000 for the successful prevention of suicide. The doctor was arrested.

Dr.Vasant had demanded that action be taken against the officials responsible for his suspension. He also levelled allegations of corruption against the hospital authorities.

The doctor alleged administrative and treatment-related discrepancies at the Gandhi Hospital. He has accused the hospital superintendent, Dr P Shravan Kumar and the Telangana state director of medical education, DR K Ramesh Reddy of targeting him for revealing these discrepancies. #KhabarLive

How Young Men In Telangana Are Lured Into ‘Clinical Trials’?