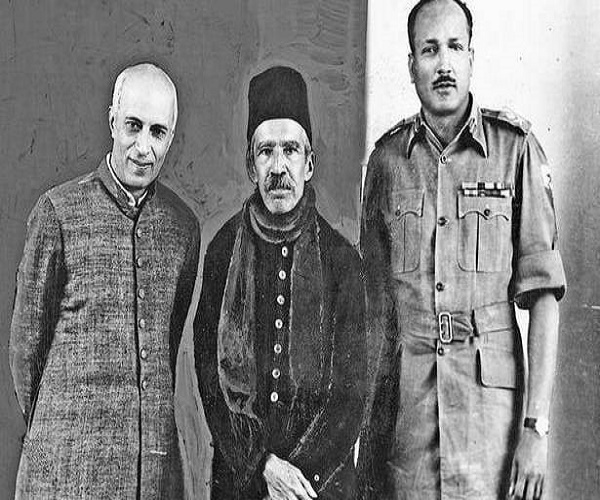 In the early hours of 13 September 1948, a shrill clanging of the telephone awakened Mir Laiq Ali, Prime Minister of Hyderabad State. General El-Edroos, Commander-in-Chief of Hyderabad’s army, had rung to inform him the Indian army had pierced Hyderabad’s border at five different points and Indian Air Force planes pounded the Hyderabad’s aerodromes in Bidar, Aurangabad, and Warangal.

At Hyderabad’s army headquarters, general staff officers pinned red flags on a stretched map of the state on the exact locations India had attacked from. Intelligence reports suggested a primary thrust from Sholapur in the West and Machlipatnam in the East; Sherman Tanks spearheaded both fronts. Within no time red flags showing Indian army units on the move crowded the map. The ‘invaders’ met with little resistance from Hyderabad’s troops; however, they had some difficulty in navigating the difficult terrain—the Deccan Plateau had many hill ranges and deep ravines.

Hyderabad’s forces failed to blow up a dynamited bridge over Naldurg pass, allowing the invading army smooth passage. Hyderabad’s army commanders sent men equipped with nothing but rifles to check the progress of armoured columns—its higher ranks unaware their Indian counterparts had deciphered their obsolete code.

On the morning of 14 September, people across India awoke to the news that their government had declared emergency in light of its ongoing hostilities against Hyderabad. They also learned India’s troops had run through a fifth of the State’s territory within the first twelve hours of the invasion. Deccan Radio aired tall tales of the heroic resistance by Hyderabad’s troops and claimed the Nizam had the support of the entire Muslim world. The only support for the Nizam occurred in Karachi where a few thousand people gathered outside Mir Laiq Ali’s home to protest India’s invasion.

Subject to an intense bombardment, the defenceless town of Osmanabad became the Indian army’s first conquest; the troops guarding the area abandoned it, the civil servants also fled when Indian shells fell around their district headquarters. An Indian Air Force plane strafed the convoy of Mr Mohammed Hyder, collector of Osmanabad near Murud; the pilot almost dropped a bomb on them but got distracted. The town of Zaheerabad fell next to Indian forces and a pitched battle ensued for Aurangabad.

Amongst doom’s midst reports filtered in that a batch of volunteers along with a single company of regular troops had thwarted two battalions of the Indian army near Hyderabad’s south-west border. Their heroics didn’t end with that feat; they also wiped off a division of the Mysore State Forces. The already low morale of Hyderabad’s troops plummeted further when in the late afternoon news trickled in that India’s forces had captured Aurangabad; its troops proudly hoisted the flag in Hyderabad’s second-largest city. When the Nizam heard the news, tears rolled down his cheeks.

ALSO READ:  Why BJP Seeks Huge 'Memorial' In Hyderabad Ahead Of 'Hyderabad Liberation Day' On 17 September 2020?

On 15 September, the invasion’s third day, the Nizam summoned Laiq Ali to ask him whether the city’s defences could hold out until the United Nations Security Council reached a decision. Laiq Ali remained optimistic of the city of Hyderabad’s impenetrability. From a military perspective, matters appeared bleak. After two days of an onslaught from the west, the Indian army blazed in from the east where Hyderabad’s troops were the most ill-equipped.

Hyderabad suffered yet another setback when AIR announced Indian forces had the minarets of the historic city of Bidar in plain sight.

On the fourth day of the invasion 16 September, the Nizam called General Edroos and Mir Laiq Ali to King Kothi Palace, as Indian Air Force planes flew overhead ominously low, the ruler threw a right royal tantrum. He taunted the General that his men were more suited to staying at home with their begums than fighting battles. He accused Laiq Ali of miscalculations, fumed at Pakistan for its silent spectatorship and raged at the inefficiency of the United Nations, declaring it would order a ceasefire over their dead bodies.

Laiq Ali’s attempts to explain the time difference between Paris and Hyderabad and suggestion that Pakistan could not help as it was a nation in mourning for its departed founder Mohammed Ali Jinnah, infuriated the Nizam further. He gave his Premier an ultimatum. He told Laiq Ali that either he and his ministers must resign and allow him to take responsibility, or he would issue a statement saying he was no longer concerned with affairs of the state.

BBC video archives give a glimpse into the seemingly calm streets of Hyderabad on 16 September: people carried on with their quotidian activities unmindful of the coming danger. A giant billboard depicts a hooded skeleton holding a caricature of Pandit Nehru in its palm with the words ‘Zaalim par mauth hans rahi hai’ emblazoned in Urdu.

On the morning of the seventeenth, the Brigadier of Western defences paid a visit to General Edroos in the command room to inform him that a spearhead of the Indian armoured column headed towards Hyderabad from Zaheerabad. When the tanks approached, Hyderabad’s forces blew up Indian tanks with twenty-five pounder guns. The remaining tanks fanned out and retreated to Zaheerabad.

General Edroos paid a visit to the front himself and oversaw members of general staff as they lay mines to divert the Indians from entering the city. In Shah Manzil, the Prime Minister’s official residence, Mir Laiq Ali awaited news from Pakistan regarding the status of Hyderabad’s case with the United Nations. The Prime Minister received a call from the stationmaster of Bibinagar who reported heavy shelling—a mere 30 miles away from the Hyderabad.

When at long last the message from Pakistan arrived regarding the meeting which had convened in Paris—the news was disheartening. On a suggestion made by the delegate of China, the Security Council reconvened on Monday the twentieth — to study the case in greater detail. This decision altered the course of history: Hyderabad enjoyed reasonable support at the United Nations. The Argentinian delegate stated that when an army invaded and killed people anywhere in the world, it was incumbent on the United Nations to hear them out.

President of the Security Council, Alexander Cadogan called a vote to decide whether to adopt Hyderabad’s application on their agenda or reject it; the vote:8 to 3 in Hyderabad’s favour. Moin Nawaz Jung, Hyderabad’s foreign minister, made an impassioned plea to stop India’s annihilation of Hyderabad; he promised to furnish documentary evidence to support Hyderabad’s right to sovereignty.

It was all too late; the Indian army had almost reached the city’s gates, fears of tremendous concern of mayhem as its entry abounded. Reports trickled in of massacres of Muslims in Bidar, Osmanabad and Kalyani. Laiq Ali and his ministers feared the Indian army would shoot a lot of them; as for Kasim Razvi, President of the Ittihad, they widely believed the Indian army would cut him into pieces upon capture.

At a cabinet meeting Deputy Prime Minister, Mr Pingle Venkatram Reddy had tears streaming down his face when he expressed his desire to be the first minster to lay down his life for Hyderabad. Mir Laiq Ali foresaw his imminent end; in a cable he told Mushtaq Ahmed, Hyderabad’s Agent-General in Karachi, that it would be his last message from this world. He then made a radio broadcast where he announced Hyderabad could no longer hold off the Indian army, appealed for communal harmony and declared an official ceasefire.

The city’s populace gathered around radio-sets on the streets in a state of shock. Kasim Razvi also made an appeal for communal harmony and clarified he had not fled to Pakistan. A solitary stark decision remained: who would present the sword of surrender? General Edroos and the Prince of Berar, the Nizam’s oldest son undertook the unenviable task.

Nawaab Deen Yar Jung, Inspector General of Hyderabad’s Police, discovered Kasim Razvi had distributed several thousand rifles amongst his men and instructed them to begin massacre Hindus to exact revenge for India’s attack on Hyderabad. Over an extended telephone call, Deen Yar Jung asked him to consider whether he wanted posterity to remember him as a man who orchestrated the killing of innocents. At the end of the conversation Razvi agreed to make the razakars surrender their arms.

Their progress hindered by mines; the Indian army didn’t reach Hyderabad until the eighteenth; a now-famous photograph shows General Edroos greeting General Chaudhri of the Indian army on the outskirts of the city. An archival video shows a short clip of the General conceding defeat. He tells the press his troops were set a superhuman challenge, and the odds were against them.

Later the same day, the Nizam made a meek broadcast on Deccan Radio repeating that Hyderabad would not press their case in the United Nations; he conceded to ordering a ceasefire and gave permission to Indian troops to occupy Bolarum and Secunderabad.

Scenes of jubilation erupted in the city; thousands took the streets waving the tricolour and throwing flowers at the soldiers entering the city in their jeeps and tanks. While those harassed for months by the razakars experienced great relief, the quick capitulation of the state forces stunned those loyal to the old order. What followed in several districts of Hyderabad State was an orgy of murder, rape, arson and plunder by people belonging to Hindu Mahasabha and several such affiliations and organisations. This is a fact the Indian government covered up. Only a portion of these atrocities were revealed in the findings of the Sunderlal Committee in 2000. #KhabarLive #hydnews