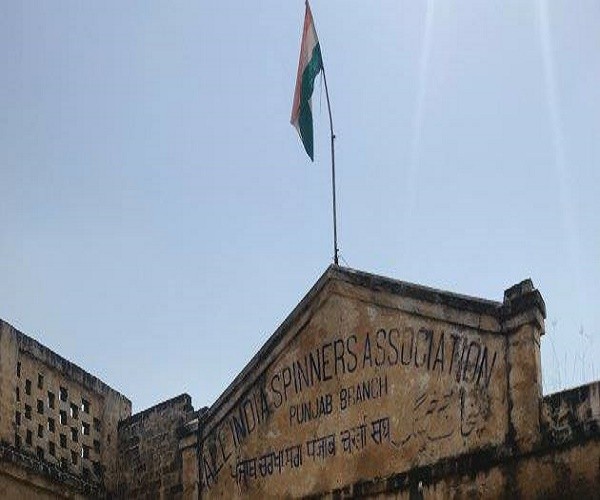 “When Mahatma Gandhi came here in 1925, the artisans greeted him with handwoven garlands made of cotton, instead of flowers,” said Krishan Kumar, Chairman of the Punjab Khadi Mandal, noting that Adampur had a rich tradition of hand-woven fabrics. “He was so impressed with their enthusiasm, he constituted the All India Spinners Association and opened its first office here.”

In the years that followed, the weavers of Adampur did their bit for the freedom movement by popularising khadi over the fabrics imported from English mills, and providing a livelihood for countless village artisans. Over the past three decades, Punjab’s khadi movement has wilted under the onslaught of the liberalisation of the Indian economy in the 1990s, the increasing popularity of malls, and eventually online shopping.

The demise of this once-vibrant folk tradition is a visible metaphor for the un-spooling of the Gandhian utopia of a national economy built around small-scale village workshops and industries. In its place, Punjab’s khadi movement followed a familiar post-independence pattern, where artisans were first subjected to the vagaries of state policy, held hostage to state support, and then abandoned when the support faded.

Today, the premises of the All India Spinners Association is a sad sight: a worn-out tri-colour with a faded Chakra (one of the early prototypes for the national flag) is all that remains of the heady excitement of the years on the cusp of Independence. Today, 20 of the state’s 28 khadi trusts are running into losses.

Last year, the Adampur Khadi Mandal registered annual sales of only Rs 8 lakh, and the centre has been reduced to producing traditional floor carpets, and the processing of mustard oil and honey bought from Rajasthan and Jammu and Kashmir.

“In the era of online shopping offering global brands at competitive prices, it is hard to survive the khadi movement without any support from the state or the central government,” said Sudesh Kumar, secretary of the Punjab Khadi Mandal.

He added that the blanket culture and the hosiery market of Ludhiana has created has dented the khadi market in the region. “With not much work in the offing, the artisans either migrated to other states or else have changed their profession,” said Kumar.

Kumar traced the centre’s decline to as far back as 1995, when the state government reneged on an agreement to offer a 20% rebate on khadi products.

“The state government later refused to pay us Rs 33 lakh due to it. It said that no such deal was signed between it and the KVIC. Even KVIC too did not acknowledge the fact later,” Kumar said.

The Khadi trust tried to revive their operations by taking loans from the Khadi Village and Industries Commission (KVIC), but failed. Meanwhile, an investment in bonds issued by the Punjab State Industrial Development Corporation turned sour when the corporation defaulted on its bond payments.

Today—much like the farmers and village artisans it was meant to support—the Khadi Mandal’s survival lies in selling off its land to pay off its debts.

A National Highways Authority of India proposal to acquire land for a road-widening project offered a glimmer of hope, but the project has since been scaled back.
“We have written to KYIC to help us revive the only khadi centre started by Mahatma Gandhi himself by turning it into a learning and skill development centre,” said Krishan Kumar. “We are indeed hoping for a miracle.”#KhabarLive