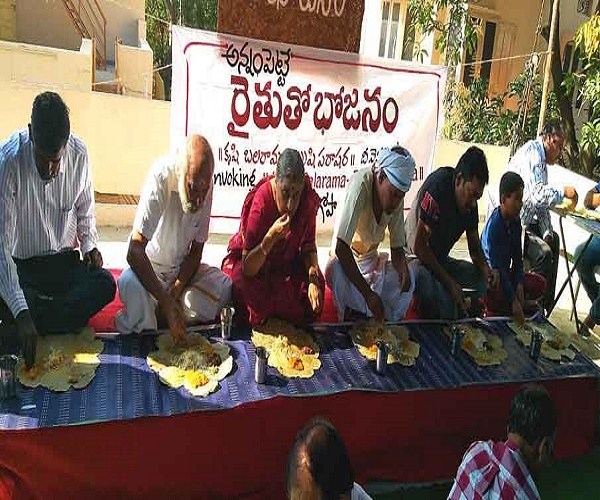 The ‘Rythu tho bhojanam’, initiated by Pagidimarri Chandrashekar, promotes the concept of showing respect towards peasants. As you know, a ‘selfie with a celebrity’ or ‘dining with a celebrity’ is not really an uncommon sight these days, but have you ever heard about lunch with a farmer? If not, yes, such a thing exists and you can dine with the person who actually brings food on to your plate.

Unlike other professions, a farmer, who feeds us, doesn’t earn the deserved respect in the society. This made Pagidimarri Chandrashekar think out of the box and it resulted in his brainchild – ‘rythu tho bhojanam’ (dine with a farmer). ‘Annadatha Sukhibhava’ is not a mere slogan for Chandrashekar, but he devotedly puts it into practice. He feels that a farmer will be completely happy only when he/she receives respect for his arduous work.

“Though it is not intentional, a farmer in our society is looked down upon, no one feels proud to call themselves ‘children of farmers’. This needs to change and respect for a farmer must be increased,” says Chandrashekar as the reason behind initiating ‘rythu tho bhojanam’.

He adds, “One feels proud to boast about meeting a celebrity; the same should go for a farmer, and such feeling can’t be developed in a day.” Chandrashekar says that it can only happen when common people who eat the food grown by a farmer meet them and dine with them.

He organised one such lunch meet last year on December 30 which was attended by around 300 people. “We invited five farmers’ all of them were small and marginal farmers. We made them sit on a two-foot elevated platform and others sat down and had food,” shares Chandrashekar.

Only organic and home-cooked food was served at the lunch which was arranged at his home with different items such as Pudina rice, a sweet made with navara rice, a dal made with moong dal, etc.

Chandrashekar shares that workers were arranged for the day to help them with chores like cutting vegetables, but they did not turn up and this led to community involvement. The locals stepped in and helped the organisers in completing the lunch successfully. “Inculcating a sense of service among people is the greatness of this programme,” he adds.

Chandrashekar, who also runs an NGO called ‘Badhyatha Foundation’, says that many people and farmers didn’t understand the concept first but they felt very happy after the meet.

He says they made sure that the food did not get wasted, as wasting food is insulting farmers, which is, in turn, insulting the nature. Everyone who attended the lunch booked the slots in advance, so the food can be cooked accordingly.

Chandrashekar, with the help of his NGO and five other NGOs which goes with the name ‘Bhagyanagar Gopaluru’, arranged this lunch by spending money out of their own pockets.

Next lunch is being planned in Nalgonda and then again in Hyderabad.

Fulfilling ‘Badhyatha’ towards the environment
Chandrashekar through his Badhyatha Foundation has done many programmes in connection with the environment and farmers. They distributed and sold around 14,000 cloth bags at a subsidised price with convincing slogans and compelling words establishing a relation between nature and the God.

“Because of my upbringing, I developed a liking towards nature. I feel, whatever we do to the society is not a service but our responsibility; hence the name Badhyatha Foundation,” says Chandrashekar who left his job a few years ago to completely dedicate his life to nature.

“Based on the crops, their requirements and conditions, we are giving Rs 5,000 to Rs 10,000 per acre to farmers and also providing them technical assistance,” says Chandrashekar.

For the past four years, they extended support to acreage of 75 to 80 acres for farmers present in Armoor, Kalwakurthy, Suryapet, Bhongir in Telangana and Krishna district in Andhra Pradesh.

Once the farmers cultivate and sell the produce, they can return the money. If they fail to sell the produce, the same can be sold at Janahitha Organic Store in AS Rao Nagar, Hyderabad. Janahitha store is run by Chandrashekar and his wife Aparna where they sell items such as organic rice, dal, haldi powder, jiggery, etc., procured from the farmers.

Chandrashekar explains that a farmer needs sustainability and respect; for sustainability, they are helping through monetary support, and for respect, they initiated ‘rythu tho bhojanam’ programme.

He feels that only when a farmer cultivates crops without any depression, positive vibrations will be developed, which will finally reach our plate.#KhabarLive