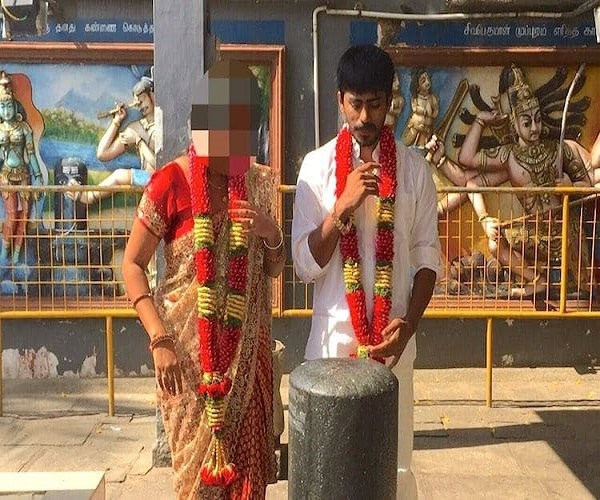 A 32-year-old Jawahar Shukra is in jail for harassing a woman from Andhra Pradesh, whom he met on a matrimonial site. But this is just the tip of the iceberg. #KhabarLive investigates the series of incidents of online fraud and intimidation.

On his Facebook page, Jawahar Shukra – alias Jawahar Balakumar – calls himself a ‘serial entrepreneur’. But the women whom he’s cheated and swindled over the past four years describe him as a serial abuser, serial ‘husband’, and a serial absconder.

In March this year, Jawahar Shukra was arrested by Andhra police, and the 32-year-old is currently lodged in the Vishakhapatnam Central Jail, for sexual assault, criminal intimidation, cheating, and dishonestly inducing delivery of property. The IPC sections barely cover the astounding nature of his crimes however. For at least four years now, he has been allegedly meeting women on matrimonial sites, marrying them, getting them to give him large sums of money, sexually exploiting them, and then absconding – only to rinse and repeat with another woman.

One of his recent victims is Anu (name changed), a 29-year-old bank employee from Andhra Pradesh who met him on Bharat Matrimony in August 2018. According to Anu, Jawahar told her that he wanted to marry her, and allegedly borrowed around Rs 18 lakh from her, citing a variety of reasons – from potential business investments to severe illness. As Jawahar’s stories slowly became suspiciously grandiose, Anu started to inquire about him. She eventually discovered that not only was Jawahar allegedly married multiple times already, but had also exploited and swindled many more women, each time with a similar modus operandi.

Cheated and abandoned in Chennai
The earliest case of Jawahar’s manipulation that Anu could trace was to May of 2015 – when he married a woman called Mamata (name changed) in Chennai.

Mamata had registered a complaint with the Chennai police in June 2017 against ‘Jawagar Balakumar’. #KhabarLive has a copy of this complaint that explains how she got married to Jawahar against her parents’ wishes, and was later verbally and physically abused by him when she questioned why they were living in a hotel room instead of a house.

Jawahar allegedly told Mamata that he owned a chain of hotels and restaurants in Chennai in the name of Jawahar Shukra Groups, and claimed that since he was facing troubles in his business, he could not get them a house. He then began to insist that Mamata bring money from her mother, allegedly physically abusing her when she refused, and insisting he would return the money within a month. Mamata was allegedly forced to bring Rs 6.5 lakh in cash, and jewellery worth more than Rs 3 lakh from her mother.

When they eventually moved to a flat, Mamata found out that he was involved with many other women, and had cheated many people in the name of business investments. Whenever Mamata questioned his actions, he allegedly physically abused her and threatened to harm her family.

The couple moved to Salem where the alleged abuse and dowry demands continued. When Mamata found out that she was pregnant, he allegedly forced her to take pills to induce an abortion.

In August 2016, Jawahar told Mamata he had a business meeting in Bengaluru – and went absconding. At first, he told her he was having problems with his business and his return would be delayed. He then blocked her on Facebook, WhatsApp, and other communication platforms. When Mamata tried to contact him after giving birth to their child in February 2017, she found out that he had married another woman called Parvathi (name changed) in Hyderabad in November 2016.

The Hyderabad hoodwink
#KhabarLive has accessed a complaint filed by Parvathi with the Alwal police in May 2017, against ‘Chilukuri Jawahar Balakumar’, alleging physical abuse, cheating, concealment of his former marriage, and remarrying.

According to Parvathi’s complaint, Jawahar met her on Telugu Matrimony, and got married in November 2016. He stayed in a hotel in Hyderabad and visited Parvathi’s house every day until they were engaged, preventing her family from doing a background check on him. Parvathi alleges that after their wedding, Jawahar and his parents harassed her and her family for dowry, in spite of having taken Rs 10 lakh in cash and 20 tolas of gold at the time of the wedding.

Just like with Mamata – Jawahar had told Parvathi that he owned Jawahar Shukra group of hotels and restaurants across Tamil Nadu and Karnataka, and his parents and brother allegedly went along with the lie. Similar to Mamata’s account, Parvathi also alleges that he insisted that they stay in hotels, was involved with several other women, and abused her when she questioned any of his actions. Once he realised he was not going to be able to extract any more money from her, he again left on an indefinite ‘business trip’, never to return.

On Parvathi’s complaint, Jawahar was arrested – but only briefly. He was let out on bail, and absconded once again. And by then, he had his next victim lined up – Swati (name changed), his junior from school.

Betrayal in Bengaluru
Swati, who lives in Bengaluru, spoke to #KhabarLive and had a similar story to share about Jawahar.

Jawahar met Swati, his junior from school, in August 2016 on Facebook. “I had seen him in school but had never spoken to him. We exchanged numbers, and he would often come to my home in Bengaluru, saying he was on his way to important business meetings. He said he wanted to marry me, sometime in mid-2017, and sexually exploited me, saying we were almost married,” alleges Swati.

Claiming to be from a very well-to-do family, Jawahar told Swati that if his family were to agree to their marriage, her father should invest in his hotels as a partner. Swati says that Jawahar forced her father to quit his job, and took Rs 6 lakh from him. When Swati’s father started to work for Jawahar’s hotels near Majestic and Ulsoor in early 2018, he slowly began to see through Jawahar’s deception. By then, it was already too late.

“My father found out that Jawahar never paid staff salaries and other expenses like groceries, and had only paid a partial advance amount for renting the properties. By the time people started to press him for money, Jawahar disappeared again,” says Swati.

This was February 2018. By August the same year, Jawahar zeroed in on his next target – the woman who finally managed to get him into prison: Anu.

Arrested in Andhra
Anu met Jawahar on Bharat Matrimony in August 2018. “After talking over the phone for a while, Jawahar and I decided to meet in person in Rajahmundry,” Anu tells #KhabarLive.

Later that month, Anu says that Jawahar took her to Srinagar in August 2018, pretending that his ‘sister’ and her fiance would be accompanying them on a business trip. When they reached, she realised it was just the two of them. At the hotel, Jawahar allegedly made sexual advances, and when she refused, he emotionally manipulated her. Anu left Srinagar immediately after the incident, only to find out later that she was pregnant. Meanwhile, Jawahar kept demanding money from her to invest in a resort in Thotlakonda, threatening to kill himself if he could not find enough money.

“I met him again in Vishakhapatnam in October 2018. He was staying at a hotel. I asked him to return my money, but he just asked me for more money so he could buy a house for both of us. He then sexually assaulted me brutally and left the hotel in a hurry. I had a miscarriage after the incident,” alleges Anu. “There are a lot of cases registered against him. He never turns up for the court summons. He keeps travelling to different cities and stays in hotels, so the people he has cheated cannot trace him easily,” she adds.

“When I told him about the miscarriage, he joked about it. After that, I just wanted to get my money back. But he just kept making excuses. He would say he had to pay salaries to his employees. He said he had dengue, then cancer. I found it a bit strange and asked him to send medical reports. He never did. I then started to inquire about him,” Anu explains, “Once I found out about his marriage with Parvathi and Mamata, I decided to go to the police.”

“I was determined to get my money back. I started to dig deeper and filed a complaint with the police in December 2018. Once he found out that I was finding out the truth, he returned my money in a few hurried instalments,” says Anu.

Anu says that when she filed a complaint with the police, they called him on his phone. He denied her allegations and said he was in Singapore on a business trip. The police then traced the call to Khammam. “He would drive around in an Audi or a BMW. All the money he had borrowed from people, he would use for showing off a false social status,” alleges Anu.

According to Vishakhapatnam III Town CI Appala Naidu, the police finally arrested him in March under charges that include sexual assault, criminal intimidation, and cheating and dishonestly inducing delivery of property. “Jawahar is currently in the Vishakhapatnam Central Jail under a non-bailable case. An investigation is being carried out on Anu’s complaint,” says Appala Naidu.

Women demand justice
Anu says that although Jawahar is now in jail and the police are investigating her case, she wants justice for all the other people, especially women, whom Jawahar has harassed and cheated.

“When I spoke to Mamata, I couldn’t believe what she and all the other women she knew had to go through because of him. I contacted four other women who had suffered because of him. Some of these women know of many others like us. Some of them, like Swati, could not believe the truth until I sent evidence I had gathered in the form of screenshots and FIRs. He has harassed and cheated many women emotionally, physically, sexually, and financially. He has even recorded intimate videos and images with many of them. Most of them have not recovered their financial losses. The emotional damage cannot be repaired. I do not want him to get away with his crimes, and to ever be able to repeat them with anyone ever again,” alleges Anu. #KhabarLive