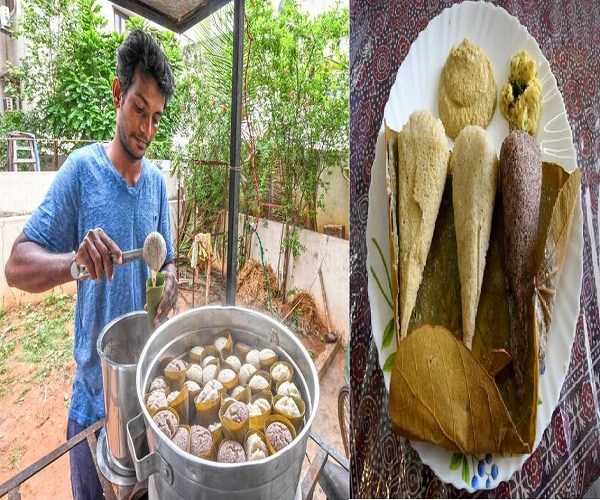 Meet Chittem Sudheer the man behind yummy millet idilis wrapped in a Vistharaku leaf. Once referred to as coarse grains, millets are getting a refreshing makeover in the recent times. And one man in the city has not only been popularising the humble grains, he has also given a fresh twist to one of the most favourite breakfast staples in the city – the idli.

India cultivates over 8 million tons of millet grains every year, followed by Africa and China.

Meet Chittem Sudheer, a startup founder and a post graduate in agriculture economics, who has been making millet idlis with a unique method and flavour. His venture called Vasena Poli has turned into a go-to place for many fitness freaks, medical practitioners and young college goers. Every morning from 7 a.m. onwards, his takeaway counter at East Point Colony is buzzing with people. A majority of them are his regular customers.

“I keep changing the varieties to ensure there is a proper balance. The right combination of millets provides a holistic nutrition to the body. Millets are full of anti-oxidants, vitamins, minerals and are also high on fibre content. Because of its low glycemic index it helps control the blood insulin levels for diabetics,” says 25-year-old Sudheer.

What makes his venture unique is the method of preparation. The idli batter is first wrapped in the Vistharaku leaf and steamed in a pot over fire. Unlike the circular shaped idlis, these are conical and are served with three types of chutneys like groundnut, ginger and ivy gourd. He has been researching on millets since 2016, but the demand and awareness for these humble little grains has never been so high as it it now, he says.

Before he started his venture, Sudheer spent time working with the tribals in Srikakulam and studying traditional crops grown in those regions. It was there that he learnt more about organic farming practices and millet crops. He collaborated with the Acharya N G Ranga Agricultural University in Guntur where he first experimented with his concept of making leaf millet idlis.

Millet can be used as a traditional cereal, and can also be used in porridge, snacks, and other types of bread.

Millet is a good source of carbohydrates and fiber, like other grains. It is also a good source of nutrients, vitamins, minerals, and organic compounds that can boost human health in various ways.

Millet is a good gluten-free option for those who suffer from reactions when gluten is consumed.

His experiments with millets initially started at home when he introduced it to his family. “They instantly rejected it because of its coarse nature. It was then that I began to look for methods to make millet preparation flavourful as well as nutritious,” he adds. The millets that he procures are all organically produced in farms in the tribals belts of Visakhapatnam Agency Areas.

He is currently looking to setup a stall where people can come and enjoy the idlis. His takeaway counter is open in the mornings (7 a.m. to 11 a.m.) and evenings (5 p.m. to 11 p.m.). The leaf millet idlis can also be ordered through Swiggy. #KhabarLive

Over 1000 Farmer Suicides Occured In KCR Regime In Telangana!

About 800 Junior Doctors Go On Strike In Hyderabad After Patient...