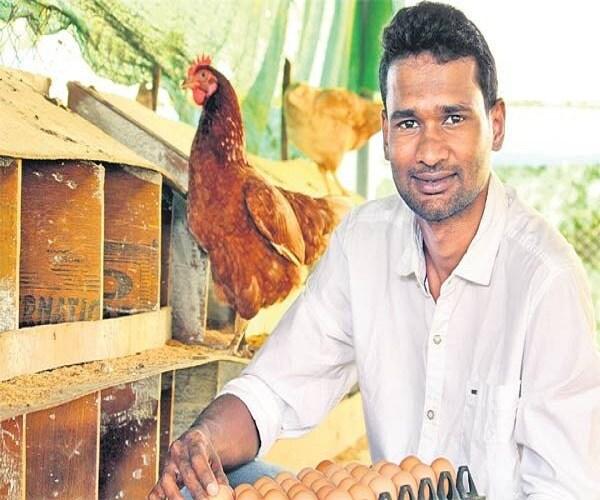 A Telangana brilliant agri-guru made a revolution to curb the food adulteration in the state with free range eggs technique. This pioneering methodology is becoming popular among poultry farmers and attracting towards knowledge base to improvise this technique to yeild more advancement.

He did not tread on the usual path; rather he chose to travel on the road less taken. He did not find any interest in a lucrative job offer one may find after graduating as a Bachelor of Technology but he aimed to help and push others forward. The youngster is Gomaram Achyuth Reddy, who now owns two agri startups and also pioneering ‘free range eggs’ revolution in Telangana.

Reddy says that he had thoughts of becoming an entrepreneur from his college days and adulteration of food was the issue that bothered him. He combined both these interests and became an agripreneur with two brands to his name now. “Only those who own more than 30-40 acres can make profits by growing organic food. For those who own less than 10 acres or so, it is difficult to make profits, and they can only be called a farmer but not an entrepreneur,” he adds.

He delved deep with a lot of research, footwork, and finally zeroed in on producing free range eggs, which is unpopular to a country like India. Free range eggs possess more nutritional value than their commercial counterparts. The hens are allowed to grow and lay eggs in a stress-free environment, unlike normal hens which are raised in cramped cages.

Pioneering ‘free range eggs’ movement…According to Reddy, free range hens live in spacious barns with ample space to roam, scratch, roost and exhibit their natural behaviour as chickens. They have access to large outdoor pastures where they get plenty of fresh air, sunshine, and exercise and they eat a lot of natural green forage, including herbs besides bugs, insects and whole grains. In addition to enhanced nutrients, this egg is a powerhouse of disease-fighting nutrients like lutein and zeaxanthin.

He says the free range movement is widely prevalent in the USA and the UK and it is an ethical and humane way of growing eggs ensuring the highest animal protection standards.

With a brand named Nutrifresh Eggs, under Suregrow Farms (OPC) Private Limited, Reddy is aggressively promoting the concept of ‘farm to table’ with his premium range eggs. With a minimum order of 12 in number, the eggs are delivered to the door free of cost from his farm in Chandi village in Medak district. He says ‘Nutrifresh Eggs’ is the first company to serve free range eggs direct from the farm to table with no middlemen and no outdoor sales in markets.

These eggs already found around 5,000 customers in the State including some big names like noted producer Daggubati Suresh Babu and Reddy now calls ‘Nutrifresh Eggs’ as ‘Celebrity Eggs’.

The 25-year-old also runs another start-up named Kisaan Shakthi Products where he procures cereals, millets, jaggery, oil, honey, milk, and milk products from the farmers by providing a remunerative price. He is thus helping the farmers to increase their income and also serving unadulterated agri-food products for the customers who are open to buy premium products.

“The rate we are giving to farmers for their products is stopping them from adulteration. And there is a change in the diet pattern and customers are willing to pay for quality,” he explains.

At present, for labour and logistics, he has a team of around 25 people, and every alternate Sunday, he organises awareness sessions for farmers on his farm to encourage them to adopt new and low-cost practices.

And for business and distribution, he is using available platforms like WhatsApp Business, existing distribution networks, and making the most out of it, as he believes money saved is money earned. Meanwhile, Reddy is planning an ambitious project in the agri-business sector assuring more return on less investment. Thus he wants to increase the number of people who take up farming. #KhabarLive

Asaduddin Owaisi – The ‘Torch Bearer’ Of AIMIM Legacy And Reputation