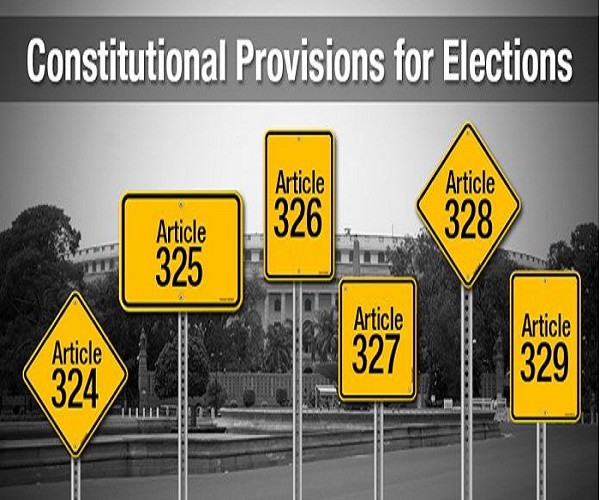 In the context of mounting complaints of misuse of government machinery by the opposition parties in all the poll-bound States including the Telangana State which is going for early polls, due to the ‘ipse dixit’ decision of the Chief Minister and his Cabinet, the only panacea, seems to be, the imposition of the President’s Rule, so as to create a ‘level playing field’.

In the context of the early polls to the Telangana Assembly, one has even heard of complaints of lack of preparedness on the part of the Election Commission of India for the conduct of polls, not to speak of testing the said preparedness on the anvil of ‘free and fair’ elections, as held by the Constitution Bench of the Supreme Court, in the matter of the Presidential Reference, with regard to the Gujarat Assembly dissolution in 2002, reported in (2002) 8 SCC 237).

When elections are declared, the ‘level-playing field’ has to be created by the constitutional functionaries, in the letter and spirit of national parchment. When the State Cabinet recommends early dissolution of the assembly, nine months before the expiry of its elected period, as is the case in Telangana State, the Governor dumbly without exercising his independent judgment or discretion in examining the political conditions that warranted seeking of a fresh mandate from the people, dissolved the house prematurely, which does not augur well for electoral democracy.

The said dissolution comes at a time when even the Election Commission was caught unawares of the timing of the said dissolution. In fact, the Election Commission was totally pre-occupied with the preparation for conduct of elections in the four other States of Rajasthan, Madhya Pradesh, Chhattisgarh and Mizoram apart, from updating the electoral rolls for the Parliament Elections, that are to take place in April 2019, with 1.1.2019 as the cut-off date for the finalisation of the electoral rolls.

There is also a debate across the country, initiated by the Central Government, on the salutary effect of simultaneous polls to State Legislatures and Parliament, on the State exchequer. In the light of the above, the question that arises in the public mind, is whether the Governor had the discretionary power under Art. 174 of the Constitution of India, to examine the political conditions warranting early dissolution or was he duty bound under the constitution, to simply follow the advice of the Chief Minister and his Cabinet.

In case, there was even an iota of doubt that the said step was taken to gain political advantage, the Governor in his discretion and independent judgement could have summoned the house and placed the recommendation of the Cabinet for early elections before it and seek their opinion. Such a step on the part of the Governor would have been in the best interests of Parliamentary Democracy, whereby all the members be they of the treasury or the opposition benches would have been afforded an opportunity to be put on notice and be heard on the issue, in accordance with much avowed principles of natural justice.

It goes without saying that the house should always enjoy the confidence of the people, while the Cabinet is expected to sustain itself on the confidence of the house. Whereas, in the case of Telangana, a crisis of confidence has been created by the whimsical and arrogant behavior of the Chief Minister, who along with his Cabinet have recommended to the Governor to dissolve Legislative Assembly without consulting the wisdom of the august house. Such a hasty step was taken only to gain political advantage at early hustings, even in the face of lack of electoral preparedness.

As already stated, the Governor in the exercise of his discretionary power, could have played a salutary role in defence of constitutional democracy by-

(i) Summoning the house under Art. 174 of the Constitution and placing the recommendation of early dissolution by the State Cabinet before it and seek its considered opinion, especially the members of the opposition, whose term of office was terminated prematurely, by the said hasty decision on dissolution. This issue is still open even after the judgment of the Constitution Bench of the Supreme Court in the Arunachal Pradesh matter (2016) 8 SCC 1.

(ii) Or recommend to the Central Government to impose President’s Rule, so as to create a ‘level playing field’ among the contesting political parties and thus blunt the political advantage, that the ruling party is seeking to gain by way of early polls, in the interest of ‘free & fair’ elections.

The second option may not strictly be within the four corners of the constitutional provisions of Art. 356 as ‘break down of constitutional machinery’ is not the same as a ‘conducting free and fair elections’, a cardinal principle of electoral democracy nevertheless. But the constitution has to accommodate the varied, legitimate political aspirations of the people who have enacted this document to rule themselves democratically.

A more viable option, within the four corners of the constitution may be the Election Commission recommending to the Central Government under Art. 324 to impose President Rules to facilitate the conduct of ‘free and fair’ election. The Election Commission stopped short of such a recommendation, when issue of dissolution of Gujarat Assembly in 2002 (2002) 8 SCC 237 came up before the Supreme Court. Hence the issue remains open without receiving the seal of finality by the Apex Court ((2016) 8 SCC 1).

Lastly, the lack of preparedness of the Election Commission in conducting a ‘free and fair’ elections is blatant from the disenfranchisement of 20 lakh first time voters, out of a total electorate of 2.81 crore in the Telangana State, by fixing an arbitrary cut-off date for finalisation of electoral rolls as 1.1.2018, when the elections to the Telangana Legislative Assembly are likely to be take place in December 2018.

The cut-off date for the final declaration of the Electoral Rolls for the Parliament Elections of April 2019 was 1.1.2019 (three months prior to the elections), whereas for the purpose of the Telangana State Assembly elections it would be 1.1.2008 (twelve months prior to the polls), which results in the disenfranchisement of such a large number of young voters and marking the elections itself as a farcical exercise.

In fact, a Constitution Bench of the Supreme Court in (1985) 4 SCC 689, best read in the light of the dissenting opinion, held in no uncertain terms that for an election to be ‘free and fair’, it should have an electoral roll which is inclusive, otherwise, it will have no sanctity and will not enjoy confidence of people. Exclusion of 20 lakh first time voters, or their disenfranchisement, by applying an arbitrary cut-off date, which is nowhere near the date of election, is a fraud played upon the election process and will not reflect the will of the people.

As already set out in the supervening paragraphs, the crucial role envisaged for the Governor in the constitution, in a political crisis of confidence, is not being over-emphasized, but it may not be out of place to set out some general perceptions on the gubernatorial position itself.

There is an influential section of the politically conscious electorate, that the post of the Governor is superfluous in the democratic context and a vestige of the bygone colonial era and whose ceremonial functions can be better performed by the Chief Justice and Chief Secretary of any particular State.

Notwithstanding, the serious critique of the post of the Governor in the context of post-independent, democratic India, it goes without saying that there are crucial moments in the political life of the nation or a particular State, when only the office of President or that of the Governor, can alone fill the gap and provide the much needed cushion to take political shocks and thus provide for democratic stability.

For the moment, one is confining oneself to the office of Governor, who can play a pro-active role in defence of constitutional democracy. That is to say, so long as the ceremonial post of a Governor exists in the Indian Constitutional Scheme, they have to be made full use of in the interest of the nation. So if all the poll-bound States, more so the one’s opting for early polls, to gain political advantage are brought under the President’s Rule by amending the Constitution and the relevant laws, so as to create a ‘level playing field’, would be in the best interests of Constitutional Democracy. #KhabarLive