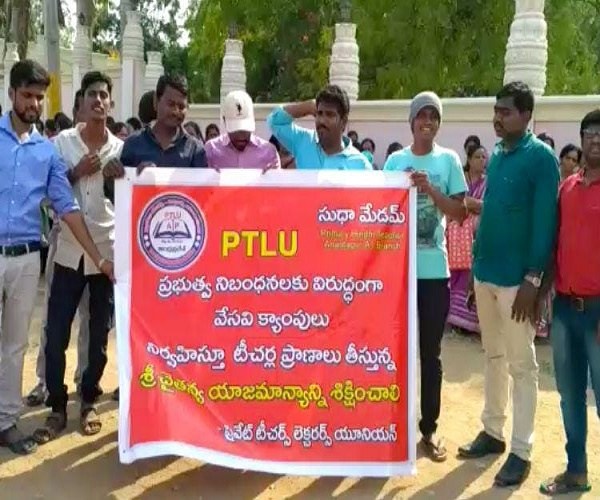 In a shocking incident, a teacher working at a school of the Sri Chaitanya Educational Institutions bled to death during a workshop in Andhra Pradesh’s Kurnool district. 32-year-old Sudharani, who hails from Anantapur, worked as a Hindi teacher at the Anantapur branch of the Sri Chaitanya school and was attending a workshop in the school’s Kurnool branch where the incident took place.

According to local reports, Sudharani was three months pregnant and had applied for leave, seeking an exemption from attending the workshop since she was not feeling well. However, the school allegedly turned down her request and sought her presence at the special workshop, which was being held from May 6 at the school’s Kattamanchi residential campus in the outskirts of Kurnool district.

ALSO READ:  'InfoTech Progress' In Andhra Prdesh Is Commendable In The Country

While many women continue to work all through their pregnancy, chances of miscarriage are known to be higher in the first 12 weeks.

On the third day of the workshop, on Wednesday evening, Sudharani fell unconscious and reportedly started bleeding. The school management rushed her to the hospital at night but it was too late – Sudharani had already lost a lot of blood because of the miscarriage and died on Thursday morning. Sudharani was the sole breadwinner of her family, reports say, and is survived by her husband and son.

Speaking to #KhabarLive, Chand Basha, the state convenor of PTLU, alleged that her body was secretly transported back to Anantapur, her hometown, by the school authorities.

Basha also questioned the organisation of the workshop during the summer holidays and claimed that rules were flouted indiscriminately to hold the ‘unauthorised’ workshop. He has demanded action against the school’s management.

Meanwhile, teachers’ associations informed the District Collector of the incident, after which he ordered the District Education Officer (DEO) to conduct a probe. However, the association has alleged that the DEO is yet to begin an investigation.

PTLU told #KhabarLive that the association will now be filing a police complaint against the management of the school.

Nannapanini Rajakumari, AP Women’s Commission Chairperson, said, “If anyone from the woman’s family reaches out to us or files a formal complaint, we will take necessary action.” #KhabarLive

(This is a developing story. #KhabarLive is making efforts to reach out to the family of the deceased teacher as well as the Kurnool District Collector)

What Hampers Hyderabad Police To Crackdown On ‘Human Trafficking’ Agents?