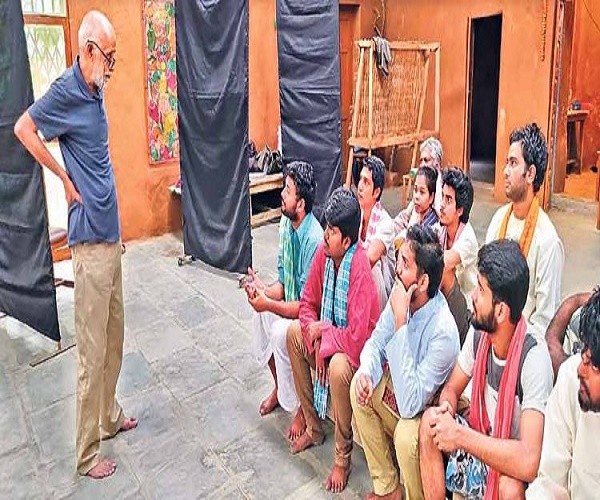 Having grown up in Vijayawada, where the natakam culture was prominent in the 20th century, Udayabhanu was always fascinated by it and used to act in plays even in his childhood.

“Watching plays based on Indian mythology captivated me and I was always drawn to theatre. I started performing in school plays when I was10. Even when I changed schools and, I was a new guy in the new school, I was always involved in theatre,” he says, adding, “Kuchipudi performances and other Indian theatre forms caught my attention the most because they offer a wholesome theatre experience, with songs, dialogues, and dance all rolled into one.”

As he grew up, his interest in theatre grew and he wanted to pursue a bachelor’s degree or diploma in theatre. But, due to lack of access to information in the 1970s, he failed to find a suitable course. “I asked a lot of people around me, trying to find out if there was a degree course in drama but, I couldn’t find one. So, I joined BSc. However owing to my constant involvement in theatre, the degree remained unfinished for a long time,” says the Nandi award-winning theatre personality. His father expired when he was a teenager and that meant taking care of the family of eight people due to which he ended up taking a job as a clerk in the railways.

While working in the railways and in college, he was constantly doing theatre performances and in the early 1980s, when Osmania University started a PG diploma in Theatre Arts, he finished his bachelor’s more than 10 years after enrolling in it, just to be eligible to enrol in the theatre diploma. Carefully balancing work and theatre, he says, “I used to go to work in railways in the morning and attend classes at the university in the evening. And I used to watch plays whenever possible.” He studied various theoretical aspects of theatre during that course, in addition to devouring books in the library and a fond memory of that time was when his professor told someone that Udayabhanu was the only guy who read all the books in the library then.

His children were born during that time and after taking a break from theatre for a year to spend time with them, he started the theatre group called Bhoomika in 1989. “I took a break for my wife and children as my wife used to feel that theatre was my first wife. But, I couldn’t stay away from my art for a long time. I was hungry for more theatre. That was when I started Bhoomika and I decided on the name because it means foundation and also a character,” he reminisces.

His children also acted in theatre with him when they were young and he feels that was very important for him, as he explains, “Usually, when theatre artistes get old and retire and depend on their kids, the kids tend to stop the retired father from pursuing the art. My children talk highly about theatre and appreciate the art form greatly.”

Throughout his career in the railways, he was constantly doing theatre. In fact, one of the things that he is fond of saying is that he worked in theatre, and acted in railways.

Though he started as an actor, he prefers direction now as acting is something which, according to him, takes full-time commitment. And full time commitment is what he expects from his students, who he teaches for free, “I never wanted to put a price tag to my form of art. I do theatre for theatre’s sake, not for awards, not for money. Whatever money that flows in from the government support that I get or from my productions, also goes back into theatre,” he explains. However, just because he teaches for free, doesn’t mean the students can be slack as he has strict schedules and students are fined upon not sticking to them. But, he also gives his students extensive freedom and tries to make them love the form rather than imposing restrictions and his perceptions on them.

His ventures like Mungitlo Natakam (Theatre in the front yard) are testimony to his experimental nature. Over a two-year period, his team went to different localities in Hyderabad and performed plays in residential areas. “We did about 30 shows in different areas and even in slums, and it was a massive success. People used to love watching our shows. It is something I want to start again,” he says.

An interesting aspect of his plays, he says, is that they stick to the everyday conversational language in them and that is what makes people connect to them. Even the plays that are taken from other countries are fully adapted to suit the audience’s taste, making sure the themes and the characters are relatable to the audiences here. “If the audience can relate to it, they will enjoy it. That is the beauty of theatre. That is why, I don’t believe in awards because theatre is subjective, just like any other art form. There can’t be a single parameter to judge theatre on. That is also the reason I don’t like judging theatre. I did judge in a few instances but, it is not something I love doing,” he explains.

Another aspect is that Udayabhanu is very passionate about doing theatre for children. In an age where kids’ attention is solely focused on gadgets, theatre aimed at children seems like a fantasy. But, according to him, if done right, it fascinates them more than electronic entertainment. “We did plays for children in many schools and every single time, they watched the plays in rapt attention. With this, I can say with conviction that theatre is something that can be done for all sections of humanity,” he says. #KhabarLive

Watch: Warangal ‘Dhurries’, A World Class Product Made By Artisans