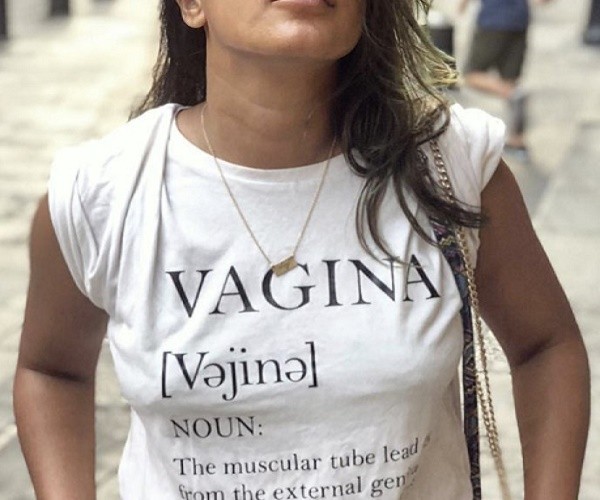 “If my girl would wear it and come to my house in front of my parents I’ll be embarrassed,” a man ranted in the comments section of a post by a popular Instagram user. His sentiment was echoed by dozens of other users, including Instagram handles bearing names that sound like that of Indian women. “Loser woman”, “shameless” — the moral police crept out of the social media woodwork in full glory.

So what exactly disturbed the delicate moralities of these Instagram users?

Because it had the word ‘vagina’ and the dictionary definition of it printed on it.

While dozens of users landed on the post simply to hurl obscenities at feminists in general and Chopra in particular, others — mostly men — posted dictionary definitions of the word ‘penis’ and wondered what it would be like if a man wore a T-shirt with the ‘vagina’ scribbled on it. When other users, both men and women, challenged the abusers, the responses were incoherent and disintegrated into volleys of expletives.

No one seemed to know exactly why they were outraged about the word but were convinced that repulsion and shame were the only ways to respond.

Let’s leave the men out of the question for the moment. Why are the women so embarrassed?

“Definitely a huge part of the audience that attacks are women. But I’ve always said that women can be women’s biggest enemy — and it’s not malicious. It’s not because they want to harm you, it’s because they’ve been conditioned to believe that anything that isn’t within the rules of ‘my dignity, my body, my pride’ is shameful,” Chopra told #KhabarLive.

“Harmfully so, women are raising all the men too, and hence when men grow up and disrespect any woman that doesn’t compromise and shut up the way his mother would’ve, they don’t respect her,” she added.

Irrespective of their relationship with their bodies — whether they “want to cover their heads or remove their bras” — said Chopra, she wants women to have each other’s backs.

This is not the first time the word “vagina” has made a section of India’s social media users rise in protest. Remember the brouhaha over actor Swara Bhasker’s open letter where she claimed that the film Padmaavat made her feel she had been reduced to a vagina?

“Yes, women have vaginas, but they have more to them as well. So their whole life need not be focused on the vagina, and controlling it, protecting it, maintaining its purity. (Maybe in the 13th century that was the case, but in the 21st century we do not need to subscribe to these limiting ideas. We certainly do not need to glorify them.),” she wrote.

Feminism, as many men (and some women) lectured Bhasker, Chopra and everyone else who tried to defend them, did not involve uttering words like vagina aloud without being ashamed and instead meant fighting for “more important” issues such as solving hunger and equal pay instead. Of course, most of these unfortunate defenders of feminism missed the point that they continued to obsessively sexualise the female body and demand that people be ‘ashamed’ of a body part. Patriarchal cultures across the world have also relentlessly associated the vagina with weakness and passivity and used it as an abuse to imply lack of courage and conviction.

Mahabanoo Mody-Kotwal, who adapted Eve Ensler’s Vagina Monologues for a series of iconic stage productions in India , remembers a female actor who came to audition for the play. “She said that she herself won’t utter the word ‘vagina’ aloud on stage. She kept saying ‘what will I tell my guru and what will I tell my friends’?,” Kotwal told #KhabarLive.

She said the reaction to Chopra’s T-shirt was “unfortunate” and that if people can’t say the word ‘vagina’ aloud, they should really question their existence. “Like it or not, before they were born, they spent quite a lot of time being nurtured inside a female body, awfully close to a vagina,” she said.

Kotwal said that though she posts regularly about her play on Facebook and has nearly 5,000 people on her list of followers and friends, she had never experienced the kind of abuse that Chopra or Bhaskar have. She attributes it to the privilege of knowing people who have had the opportunity to educate themselves on issues of sexuality. The moral anxiety around saying the word ‘vagina’ aloud, said Kotwal, ultimately lies in the lack of education.

She also recounted an instance when the principal of a co-education school in Mumbai recently invited them to stage the play in school. Kotwal, who has staged the play for 16 years across cities in India, didn’t know what to expect and was apprehensive about the nudging and chittering that a play like this would invoke among high-school students. The principal, however, was convinced that the play must be staged. So it was performed twice, separately for the girls and the boys. “The response was surprising. The students were so receptive and intelligent that we went on to hold a two-day workshop to discuss issues of sexuality with them. The boys and the girls attended this together,” Kotwal said.

It is important, she said, to not use fictitious names for genitalia with children as well. “The education starts there. I have grandchildren who call vaginas vaginas and penises penis since they were three years old. They have never used words like choo choo, chee chee that people tend to. If they need to clean up, feel discomfort, they specifically use the word ‘vagina’ and ‘penis’. That’s how we have schooled them,” she said.

The confusing demonising and sexualising of the vagina, Kotwal said, also makes it difficult for victims of abuse to come forward and speak. “Recently, a woman came to me after the show and hugged me. She said she had been violated and she could barely speak about it. But when she watched Vagina Monologues, she felt that there were people like her who had been through similar experiences,” she added.#KhabarLive

All Open Markets See Massive Crowd As Hyderabadis Stock Up For...