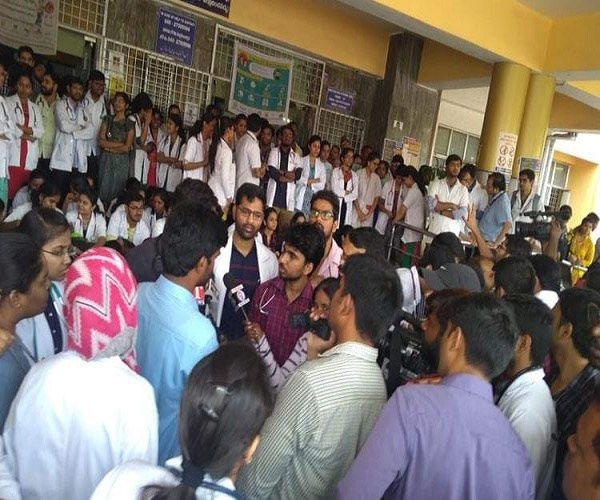 Around 800 doctors from Hyderabad’s Gandhi Hospital are boycotting services following a case of alleged assault by family members of a patient. A paediatrician from Gandhi Hospital was allegedly assaulted by the family of a baby who succumbed to her illness on Tuesday.

Dr Karthik was working his shift at the Paediatric Intensive Care Unit (PICU) at Gandhi Hospital in Hyderabad when a 2-month-old baby was brought in with fever. The baby was known to have a heart condition and was treated as per protocol. Doctors who assessed the baby noted that she had bronchopneumonia and viral myocarditis and that she was presenting with several complications.

They determined that it would be beneficial to intubate the baby, which is when an artificial tube is inserted into the trachea to help with respiration when a patient is unable to do so for any reason. However, given that the baby was presenting with underlying issues, they knew there would be some risk involved and had explained the same to the family members, who consented to the procedure, doctors said.

ALSO READ:  Everything 'Not Fair In Telangana' As Dalits Let Down By KCR's 'Silence' Amid 'Caste Politics'

The baby died at around 6:30 pm on Tuesday evening, following which the grandmother allegedly assaulted the duty doctor, Dr Karthik, and relatives also damaged the furniture in the PICU. Dr Karthik has been admitted to the casualty after sustaining bruises and injuries. Following this, around 500 post-graduate doctors and around 350 house surgeons from Gandhi Hospital and Nilofer Hospital in the city have called for a strike and will be shutting down all elective departments.

“As of now all emergency care facilities are available, but electives will continue to be boycotted,” said Dr PS Vijeyender, chairman of the Telangana Junior Doctors Association (TJUDA) to #KhabarLive on Wednesday morning from the protest location. He further noted that there would be an overflow of patients in the pediatric departments of both Gandhi and Nilofer hospitals, as the doctors will be on strike.

Dr Karthik is a second year post-graduate student in pediatrics at Gandhi Hospital and was on duty when the baby was brought in. According to TJUDA sources, he was attacked in front of several security personnel who did nothing. TJUDA has also condemned the assault and has also issued a list of demands which will ensure the protection of doctors to prevent such incidents from occurring. The TJUDA has clearly stated that unless all their demands are met by Wednesday, all services (including emergency care facilities) would remain shut down.

This incident is the latest in a series of such instances of violence against doctors by patients’ family members. Earlier in June, a patient from Chennai’s Stanley Medical College had slapped a house surgeon (CRRI/trainee doctor) for administering an injection. Trainee doctors at the hospital and college took to protesting against the same and sought protection. #KhabarLive