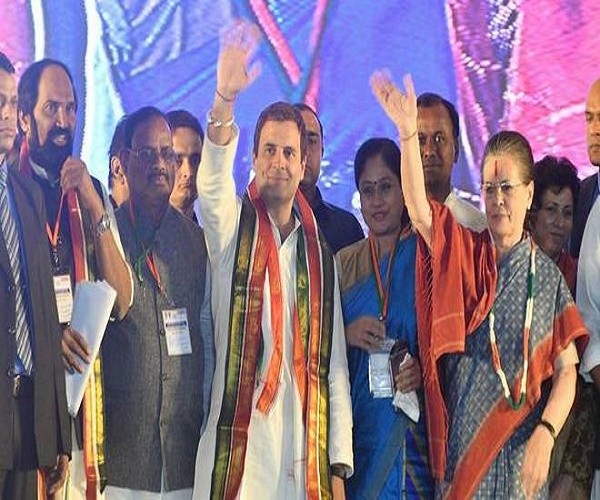 The stage is set for the most gruelling phase of the elections scheduled for December 7.Till now the Telangana Rashtra Samithi (TRS) has been going around, harping on the schemes it had introduced. TRS leaders including caretaker Chief Minister K Chandrasekhar Rao claim that a majority of the 51 lakh farmers’ families have been receiving the agriculture input assistance of Rs 4,000 per acre, per crop under the Rythu Bandhu scheme and are also covered under the Rythu Bhima, crop loan waiver and land records purification.

Supply of KCR Kits, distribution of 80 lakh sheep to the Golla and Kuruma communities, construction of double-bedroom houses and a host of other programmes have also been a boon for the people of the disadvantaged communities in the State.

Now the Congress-led Praja Kutami has, in a strategic move, brought Sonia Gandhi to launch the first joint major public meeting at Medchal. Playing the role of a mother, she poured out her agony and anguish over the state of affairs in Telangana. She said she was pained to see the newborn baby suffering and the main issue of Neellu (Water), Nidhilu (Resources) and Niyamakalau (Jobs) continue to remain a distant dream.

The youth are disappointed. Women are suffering. The newborn child has been left without being properly nursed and on the other hand, the residual State continues to suffer as whatever help that was promised to them did not materialise.

Hitting two birds in one shot, she reiterated the commitment of the Congress to accord Special Category Status for the mother State Andhra Pradesh. She gave a clarion call to the people to rekindle the spirit of the fight they had shown for separate State to defeat the TRS. She painted the TRS as a party that never stood by its words. Sonia Gandhi was never a great orator.

But then, in this meeting she succeeded in speaking like a mother who was pained to see her child in distress. Her speech was short, clear and was laced with emotion. She also unveiled the vision as to how the Congress-led government would develop the State if voted to power. In his brief speech, Rahul Gandhi assured that Praja Kutami government would function with the spirit of cooperative federalism.

This meeting cannot be taken lightly though the ruling party would try to make fun of it during its election campaign. Yes, the crowds were mobilised. There is nothing new in it since every party including the ruling party is doing the same. It shows the efforts the Praja Kutami led by the grand old party is making to revive.

If the Congress wins or at least succeeds in creating a hung Assembly, it will give a boost to the Opposition parties and would brighten the chances of forging a grand alliance for the Lok Sabha elections. The response from the huge crowd should certainly be a cause of worry for the ruling party in Telangana. The Congress which failed to impress the people that it was Sonia who gave Telangana State is now hard selling this idea.

In an effort to outwit the TRS chief and his tactics, the Congress is now presenting Kothapalli Jayashankar as the architect of Telangana State. It is also promising jobs and pensions to the families of those who sacrificed their lives during the separate statehood agitation.

The alliance wants to win the sentimental vote in the name of the ideologue who was an academician and social activist from Warangal. The TRS and K Chandrashekar Rao did acknowledge his services but had not given him the kind of importance he deserved is the argument of the new front. All that the TRS had done was to erect a statue, name a district and Agriculture University in Hyderabad after him. It is also trying to encash on the statement of Chandrashekar Rao saying that he would take rest in farmhouse if he loses the election and K T Rama Rao’s challenge that he would quit politics if the TRS does not come back to power.

From now onwards, the central theme of the campaign by Praja Kutami would be that TRS government has cheated the poor people on the promise of providing double bedroom houses and would try to win the people with the assurance People’s Front government would pay Rs 50,000 towards yearly rent to all the slum dwellers of Hyderabad and Ranga Reddy who had applied for 2BHK scheme. The payment will be made within 15 days after the formation of People’s Front government under a new scheme called ‘Maa Inti Velugu’ and that construction of all sanctioned houses would be completed within one year.

Another issue which it hopes will help them is the promise to pay salaries on par with government employees to the contract and outsourcing employees as per the Supreme Court’s guidelines on ‘Equal Work – Equal Pay’. This promise would be fulfilled within three days after formation of the next government.

Among other assurances are announcing Interim Relief within 15 days and constitute Pay Revision Commission within 30 days of formation of the government. He said the Contributory Pension Scheme (CPS) would be scrapped while restoring the old pension system within a month of the formation of People’s Front government.

Undoubtedly, this meeting has helped in boosting the spirits of the Congress cadre and highlighted the need of democratic compulsion, a word which was coined when the TDP supremo and Andhra Pradesh Chief Minister N Chandrababu Naidu met Rahul Gandhi. It has also sent a clear message to the neighbouring State which would go to polls in another three or four months that it would accord the promised Special Category Status.

This gives a clear indication of how fast the realignment of forces not only at the national level but at the State level is also taking a concrete shape. Though there may not be a formal alliance between the Congress and the Telugu Desam Party (TDP) in the Assembly elections, the TDP has succeeded in reducing the anti-incumbency factor.

In fact, the change in air was felt soon after Rahul-Naidu meet. The Congress which was speaking the language of YSRCP and was attacking the TDP suddenly realised that if it continues to do so, it will go the BJP way in the State and lose deposit. In the last four years it had failed to win back the Reddy community which had drifted towards the YSRCP in Andhra Pradesh. With the newfound bonhomie between the Congress and the TDP, the former has now started targeting Jagan and Pawan.

It is also sharpening its attack on the BJP after the Rafale controversy and has started making efforts to win back at least some of the Reddy votes it had lost. In view of the changing political scenario, Pawan too has now started criticising Jagan. Of course, he continues to make all kinds of allegations against the TDP, Chandrababu Naidu and his son Lokesh.

At this point of time, the formation of People’s Front appears to be gaining popularity among the people. But then, the fog would get cleared only on December 11 when the results of elections to the Telangana Assembly and other four States would be out. Till then it’s time to keep the fingers crossed. #KhabarLive