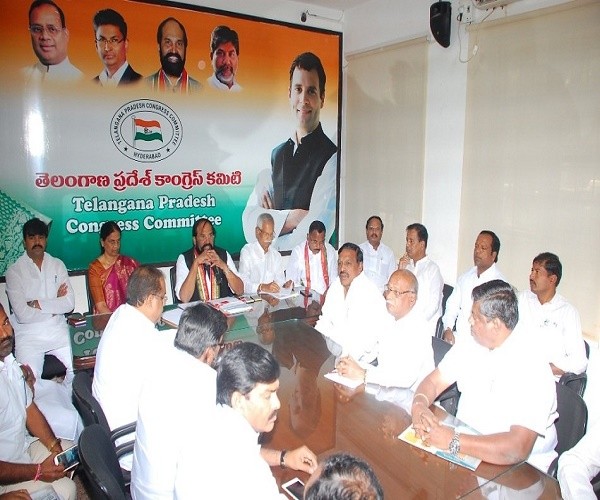 Several senior leaders of the party are appealing to the Telangana Pradesh Congress Committee to chalk out a mass contact programme, so that party can go into the people. Some leaders have been suggesting district and constituency-wise agitations.

The Congress leaders have planned padayatras in the State early in this year. Leaders like D K Aruna, Komatireddy Venkat Reddy, A Revanth Reddy and Ponnam Prabhakar have sought the permission of the high command for pada yatras.

The Congress high command, however, has not given permission for padayatra. The high command has not accorded permission even for ‘limited campaign through padayatra.’ The reason, according to sources, for the high command to disallow the programmes is the fear that it may lead to unnecessary controversies.

The TPCC has started the Bus Yatra in February of this year covered about 40 Assembly constituencies and this was stopped few days ago. According to party sources, the high command had directed the TPCC to put the Bus Yatra on hold.

With this, the Congress has stopped the mass contact programme and the leaders are in confusion over how to take forward the campaign against the government. At the recent meetings with the AICC leaders they have suggested that the State party should take up a campaign immediately.

The leaders pointing out that the ruling and Opposition parties in the neighbouring Andhra Pradesh have been actively engaged in poll campaign much ahead of the election schedule.

YSR Congress President Y S Jaganmohan Reddy has undetaken padayatra to over 3,000 km and has already toured most of the districts in Andhra Pradesh. In the same way ruling Telugu Desam Party too has been holding several programmes.

The Telugu Desam has taken up the issue of implementation of promises made to AP in the AP Reorganisation Act as main plank and has been holding several programmes in this regard. The TDP has been projecting the steel factory issue in Kadapa district as a major issue.

The YSR Congress, Telugu Desam Party, Jana Sena and Left parties in Andhra Pradesh have already launched poll campaign, whereas the Telangana Congress is yet to chalk out a programme, some leaders pointed out. The BJP in Telangana has also recently launched a Statewide tour programme. The Telangana Jana Samithi leader Kodandaram has been visiting several districts, they said. #KhabarLive

#LockdownBlues: ‘Instant Noodles’ Off The Shelves From Supermarkets In Hyderabad