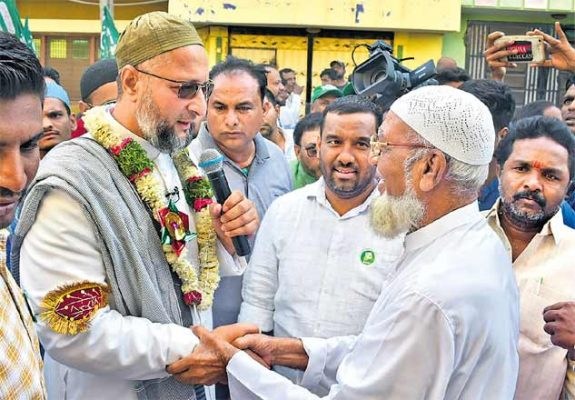 The message is simple and straight forward. “Zara khayal rakho,” Asaduddin Owaisi, the AIMIM candidate from Hyderabad for the Lok Sabha elections, tells people he meets as he presses through with a brisk morning padayatra in the constituency.

The three-time Lok Sabha member is out campaigning for re-election to the Parliament in the April 11 polls. Owaisi needs no introduction to Hyderabadis, and this becomes evident as people rush out of their homes to greet him. In the narrow lanes and even narrower bylanes — some barely wide enough to fit three people walking tightly side by side — residents stop him briefly to shake hands with him or offer a garland of roses.

“Please vote for the MIM. Vote for the kite,” Owaisi says into a microphone that is his constant companion on these walks. A small speaker carried by one of his followers ensures the message is loud and clear.

A man stops Owaisi and invites him into his house. “Bas ek minute ke liye,” he says, but the AIMIM president politely turns the invite down. He has at least another hour of his planned two and a half hour padayatra to complete.

And he wants to cover as much area as possible before the sun begins showing its fangs.

The only ones blocking the scorching pace he sets are some of his followers, local residents and kids who join him for short stretches.

Everyone wants to walk with him. Selfies are a popular choice and Owaisi obliges as many requests as he can.

And sometimes, he is blunt. “I have to meet the people,” he tells his assistants. “Bas ab ruk jao,” he says, “Jaga bano.” His assistants immediately push the crowd back so he can have quick chats with the locals.

And then it begins again. The rushing, pushing, shoving and people trying to slide past one another in a bid to walk closely with their leader.

Heart of heritage, a bastion of MIM

Hyderabad Lok Sabha constituency is one those in the country that can truly be called a bastion of one political party. For the past 35 years, the constituency consistently elected All India Majilis-E-Ittehadul Muslimeen (AIMIM) candidates beginning in 1984 with former AIMIM chief Sultan Salahuddin Owaisi, who was elected six times on the trot from the constituency. Since 2004, the seat was held by his son Asaduddin Owaisi.

It did not matter over the past three decades who the Congress, the BJP or other parties fielded from Hyderabad. None could shake the stronghold that the MIM has on the constituency. For the April 11 elections, Asad is squared off against Firoz Khan of the Congress and Bhagwant Rao of the BJP. While the TRS has fielded Puste Srikant as its candidate, the party is fully supporting Owaisi.

Dotted with landmarks, much of Hyderabad Lok Sabha constituency comprises the ‘Old City’ of Hyderabad indicating the rich history of the constituency. While Charminar stands tall at the centre of the then old city of Hyderabad, the constituency is also home to one of the richest collections of artefacts with the Salar Jung Museum located next to the Musi river. Then there is Mecca Masjid, adjacent to Charminar, along with the famous Falaknuma palace which is now a heritage hotel.

A must-visit area for tourists for its sights and pearls, the Old City is all set to get a modern makeover in the years to come with the extension of Metro Rail.

‘I don’t have a Jekyll and Hyde personality’

He is known as a straight-shooter. Over the years, he has emerged as a significant voice in Indian politics, not just representing issues facing minorities but the nation as a whole. Asaddudin Owaisi, the Lok Sabha member from Hyderabad, speaks out his mind in a quick chat with #KhabarLive.

You are often criticized by your opponents on various issues. And also often called names…

My opponents have called me a traitor, anti-national and what not. If I raise important issues relating to India’s pluralism and composite culture in the face of majoritarian democracy that the RSS and the BJP are leading the country into, and they become controversial issues, so be it.

One must really shout out to be heard under these circumstances. Very soon, my opponents will have to invent new words for me which will one day be put in Oxford dictionaries.

I don’t care what others think of me. My responsibility is to speak up. I do not have a Jekyll and Hyde personality. You like me or you don’t, that is not my concern. I am not into changing my image into soft, hard, or sweet. I am not interested in all those gimmicks. You get what you see. It is as simple as that.

Do you have ambitions of becoming a national-level minorities’ leader?

I don’t want to be a national leader. There will not be a national leader for Muslims as the community is not homogenous. It faces issues of discrimination and political under-representation. Muslims and minorities require an independent political voice to put forward their views and concerns. As an MP I have been bestowed with responsibility and I work to fulfil that.

You have been criticised on your comments on Pulwama terror attack and Balakot airstrikes….

I have said Pulwama is an intelligence failure of Narendra Modi government, How did so much of RDX get into the Valley? Who is responsible. My only question is on accountability, and Modi is not forthcoming on this issue.

Secondly, it is a political failure because the BJP ruled J&K with Mahbooba Mufti. And thirdly, it is a diplomatic failure despite Modi’s ‘jhoola diplomacy’ with the Chinese Premier who does not acknowledge Pakistan’s role in the attack.

As far as Balakot is concerned, we stand with the government statement. What we do not agree with are statements given by Home Minister Rajnath Singh and BJP president Amit Shah. Who is playing politics with the issue? Is it Rajnath Singh or Amit Shah? They will fail in exploiting it politically. #KhabarLive

No Space For The ‘Dead’ In Hyderabad