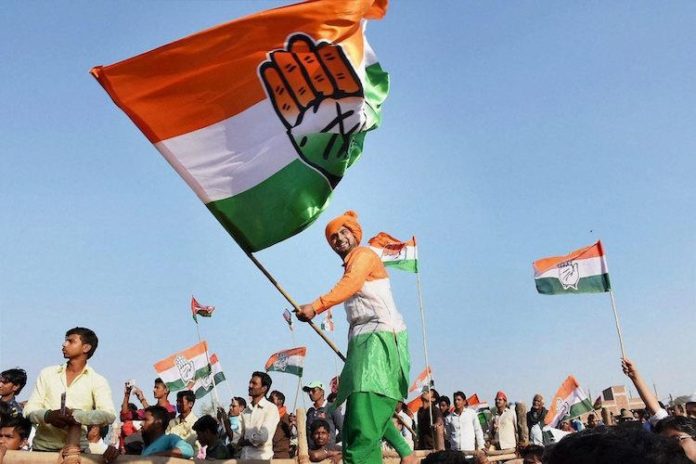 All is not well within the Telangana Congress, its leaders are fighting over chairs, throwing water bottles and coming to blows with each other. With the General Election results around the corner, the Telangana Congress finds itself on the verge of becoming non-existent in the state, and many within the party want the head of their state president N Uttam Kumar to roll.

Uttam Kumar is a four-time MLA and former minister. A former Indian Air Force pilot, he took over as the Telangana Pradesh Congress Committee (TPCC) state president in 2015. The state has witnessed one municipal election, a state election, legislative council and panchayat election during Uttam Kumar’s reign, but the party fared poorly in all the elections. Several MLAs and big leaders have since quit the party and joined others.

Those who have questioned the party or have expressed displeasure have been suspended or dismissed. Those from within the party accuse Uttam Kumar of poor leadership and of failing to capitalise on the state’s issues that could have resonated well with the public.

“Uttam failed to rise as a leader,” said M Shashidar Reddy, former Union minister of state and Congress veteran who was denied a ticket in the 2018 state elections. “He entered politics by becoming an MLA and then went on to become a minister but has no party organisation experience. He has not been able to rise as a leader despite being given the opportunity,” he added.

The leader said Uttam Kumar, in the two and half years leading up to the state elections, never took up issues that affected people nor held the TRS-led government accountable on the effectiveness of their big budget schemes. “When you are in the Opposition, it is a challenge to get back the trust of the people, but there was a lack of effort to build confidence with the people, despite many opportunities. There were hardly any discussions on issues concerning people. There are knowledgeable people within the party who can help and advise but they were sidelined. There was no taking stock of situations,” he added.

ALSO READ:  Has Pawan Kalyan And KCR Are Friends Together? The Shifting Politics Of The Actor-Politician

There have been instances of rebellion within the party. At the time of state elections, several leaders who were denied ticket had filed nominations against the party’s chosen candidates. Many of them were suspended. Post elections, some were removed from the party for perceived anti-party activities.

Some of the leaders #KhabarLive spoke to, pointed fingers at the “wrong signals” sent by the TPCC chief to the senior leaders, many of whom have since quit.

“The MLA seat from Tandur was given to someone who joined Congress barely a month before election, this person has won the election but now his mother has been given the Zilla Parishad ticket, what message does this send to the low rung cadres? How do they rise within the party?” asked another Congress leader who did not wish to be named.

The joining of Ravant Reddy from TDP to the Congress has also not gone down well with the party, pointed out the Congress leader. ”Soon after he joined, he was made working president, how would a loyal Congressman view this? The TPCC chief did not think about such moves causing disappointments within the cadre and the leaders. This is why there have been mass defections in the party,” he added.

Several party leaders #KhabarLive spoke to are waiting for the Congress High Command in Delhi to remove Uttam Kumar as TPCC president. About 20 MLAs in 2018 had approached AICC president, Rahul Gandhi with their complaints and seeking his removal as state president.

“There is a chance that Uttam Kumar may be removed or will quit himself in the weeks to come,” said another senior Congress leader who did not wish to be named. “Uttam himself has conceded to his close confidants that after parliamentary results, he would step down. Though this was something that was very much on the High Command’s agenda, they would have removed him sooner but the Telangana elections got preponed,” said this leader.

Those within the party say the next few years are very crucial for the Telangana Congress. After the Hyderabad municipal elections this year, the next election in the state is only in 2023. “But we have to act now, there is trouble brewing within the TRS that is going to show up in the coming months when K Chandrasekhar Rao (KCR) hopes to be part of the Central government. That transition may not go well with his party due to the fight that is going to happen between Harish Rao, the former irrigation minister and KCR’s nephew, who is perceived as “a real grassroots champion,” and KT Ramarao (KTR), the former IT minister and son of the Telangana Chief Minister KCR.

“KTR is enjoying the benefits of the work done by people like Harish Rao. The desperate poaching of MLAs from other parties is to ensure that KTR has a cushion even if a few MLAs loyal to Harish Rao create trouble. So the Congress has to gear up for all these situations but the party is not planning enough to take political advantage of the situation,” said the leader.

D Sridhar Babu, Manthani MLA and one of the six remaining MLAs of the Congress in the Telangana assembly, told #KhabarLive, “A complete overhaul and restructuring of the party is needed but I doubt if the party will look for a new leader in the state.”

The leader says the party is brainstorming to find out the reasons behind the mass defections and to find ways to rebuild the party from scratch. “We are now bothered about our existence in the state. The party is thinking about what is happening, and why people are leaving. We have a solid four years ahead to bring people back into the party and also the leaders who had left,” added Sridhar. #KhabarLive

How ‘Caste And Communal’ ‘Horror Stories’ Developed In A Telangana Village?