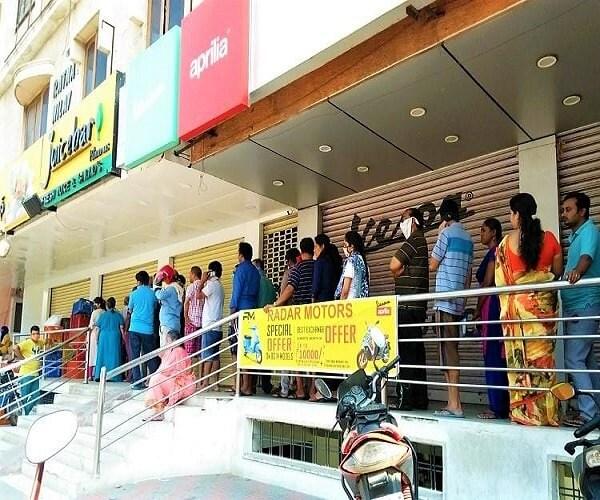 As a lockdown was announced in Telangana until March 31 to prevent the spread of the COVID-19 pandemic, heavy rush and long queues were witnessed at supermarkets and ‘Rythu Bazaars’ (farmers market) across Hyderabad.

People began lining up outside supermarkets and Rythu Bazaars, in a bid to stock up on groceries and other essentials, despite a clear statement by Telangana Chief Minister K Chandrasekhar Rao that all establishments that sell essential items will remain open.

“People have been coming in non-stop since I opened the shop at 6 am. They are largely buying vegetables and groceries in bulk though I am repeatedly assuring them that we will stay open till March 31 and will be adequately stocked,” a shopkeeper in Gachibowli, the city’s IT sector, told #KhabarLive.

In Secunderabad too, the situation was the same. People were seen standing in a long line in front of Heritage Fresh in Maredpally, with not everyone paying heed to calls for social distancing in the wake of the coronavirus pandemic.

When contacted, one of the store’s managers said, “There is a very heavy rush since this morning. We are providing sanitizers and making sure that every customer uses it before they enter the store. Even inside the store, we are requesting people to keep some distance.”

Stating that hygiene practices like constant cleaning of baskets were being carried out, he added, “Many people are also wearing masks. We are taking all steps from our side to ensure that the virus doesn’t spread.”

Other supermarkets in the city were also deploying thermal scanners at the entrance with their security guards, to ensure that no person with a fever can enter the premises.

Several people also took to social media to point out that markets were packed with people. This included the Erragadda ‘, Rythu Bazar’.

Speaking to #KhabarLive, an official of the Greater Hyderabad Municipal Corporation (GHMC) from Erragadda said, “Since it’s the first day (of the lockdown), many people came out to stock vegetables for the rest of the week. We hope that in a day or two, the crowd will stop. On our part, we are making sure that their hands are sanitized before they enter the market.”

Similar crowds were witnessed across the city on Saturday, as people rushed to stock supplies ahead of the ‘Janata Curfew’ called by Prime Minister Narendra Modi.

As of Monday, Telangana has reported 30 cases of COVID-19.

In a bid to contain the virus, Chief Minister K Chandrasekhar Rao said that the entire state would be under lockdown till March 31.

“Only self-restraint can protect us, the state and the country,” he said adding the government will review the situation on March 31 to decide the future course of action. #KhabarLive