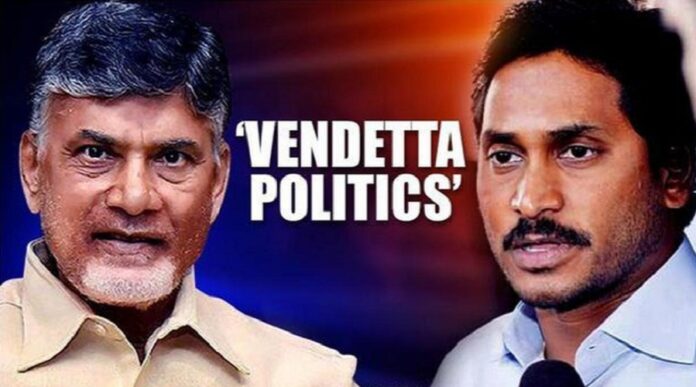 The Andhra Pradesh political terminology makes everybody to change with the times and ideologies. Well, the evidence does not support the claim that the Chandrababu Naidu government was myopic in its vision to develop Amaravati as an engine of growth.

Say a lie enough times and it might turn true. Communalize an issue over and over and there might not be any other way to look at it. The latest entry to this tradition was an opinion piece published in a major South Indian daily. The article promotes the three capitals proposal of Andhra Pradesh chief minister Y.S. Jaganmohan Reddy and repeats the same set of falsehoods about the planned capital Amaravati and N. Chandrababu Naidu.

In its very first line, the editorial accuses ‘friendly’ media of giving a rosy tint to Chandrababu Naidu’s term as CM in the 2000s. That might very well be true. But in going the opposite way, in imputing false intentions and indulging in bad faith arguments, the publication leaves itself open to accusations of being called a cheerleader for the other camp. One has to be careful to not pass off opinion as facts. A grand vision that looks to transform the reality of that time must not be mystified and disparaged with a cloud of weak arguments.

The allegations laid out go like this. First, that Chandrababu Naidu had a ‘penchant for grandiose programs lacking in substance.’ It is claimed that only Amaravati had been focused upon, especially to the detriment of other regional interests. Second, even if there was hard work, it was essential to preserve power among the Kamma caste by building the capital between Vijayawada and Guntur. Third, the plan to build Amaravati bucked the recommendations of the Sivaramakrishnan Committee about the need for decentralized development and not wasting fertile land. Fourth, Amaravati would have been the symbol of a megalomaniac and not a ‘people’s capital’. It apparently had only speculative money flowing in.

Setting the facts right
The rise of Hyderabad, the model for Amaravati, as an IT powerhouse, and how its revenues were redistributed to alleviate poverty is well-documented. From Rs 20 lakh in 1992, Hyderabad’s IT exports rose to Rs 0.32 lakh crore in 2009 and to Rs 1.28 lakh crore in 2019. As per Planning Commission estimates, Andhra Pradesh saw the biggest decline in poverty between 1993-94 to 2011-12 in India, from 35.1% to 5.8%. This transformation is partly due to the liberalization and globalization policies of the Centre and state government (under the Telugu Desam Party) between 1994-2004.

After the bifurcation of Andhra Pradesh, the irony is that in the residual state, not enough was spent on Amaravati, to begin with. A large chunk of foreign direct investment (FDI) and domestic investments went to the districts of Chittoor (Sri City), Anantapur (KIA Motors), Vizag (Adani and LuLu), Vizianagaram (Patanjali Food Park), and Krishna (HCL).

That these efforts were successful is evident from the fact that Andhra Pradesh topped India in creating quality jobs, and in terms of gender equality, youth employment, and labor force participation rate, as determined by the Just Jobs Index report in 2019. Huge solar parks in Kurnool and Kadapa, the biggest in the world, beginning in 2017-18, are at various stages of commission. Each was touted to produce 1000 megawatts of power. These undertakings, located in the backward Rayalaseema region of the state, provided lakhs of jobs overall.

The Sivaramakrishnan Committee raised concerns about food security when taking away thousands of acres of fertile land for urbanization. Counter-intuitively, using a tiny fraction (0.03% of Guntur’s net sown area of 13 lakh acres) for the Amaravati capital region does not harm the national or state food security, precisely because the whole region is a rice bowl.

The benefits of tapping into the locally vibrant private sector to build a greenfield city outweigh concerns about wasting fertile land, especially in a valley as fertile as this. Nearly 70% of those who donated land through an innovative and non-coercive land-pooling scheme were small and marginal farmers, holding less than 2 acres, not absentee landlords.

As for the claim of preserving power among the Kammas, it is pertinent to note that the Capital region straddles four SC-reserved constituencies (Prathipadu, Tadikonda, Nandigama, and Tiruvuru) in Krishna and Guntur districts. As per demographics, the 29 panchayats making up the Capital have more than 75% of BCs, SCs, and minorities, with Kapus making up a considerable chunk in 15 of these panchayats.

ALSO READ:  The Invisible Covid-19 Made Visible By Turning Crisis Into Opportunity

Decentralized development between 2014-19
The Committee itself identified the Vijaywada-Guntur Urban Agglomeration to be most suitable for building a new capital, in terms of development, water availability, and connectivity. Conversely, Greater Vizag was determined to be the worst of all options in terms of connectivity and risk factor. It is also located in an ecologically sensitive zone, having faced multiple cyclones. It strains economic logic that North Andhra is sought to be developed by locating the capital in Vizag. It is the 10th richest city in India (fourth in South India) in terms of GDP and per capita income. Vizag is already a powerful growth engine for North Andhra.

If we peruse the Andhra government budgets between 2014-19, and how these are implemented on the ground, it is evident that a major share of fiscal resources was spent on public investments in agriculture. This runs directly counter to the claims in the article. Polavaram was the government’s flagship irrigation project and had been two-thirds completed as per the Centre’s own utilization certificates. Lift irrigation projects, interlinking of rivers, and dams were undertaken across the state, be it the Veligonda and Gundlakamma projects in Prakasam, Nellore, and Sangam barrages in Nellore, interlinking of Vamsadhara and Nagavali rivers in Srikakulam, and the Handri Neeva Canal project across Rayalaseema.

Topping India, more than a lakh ponds were dug by converging MEPMA and NREGA programs in Anantapur to alleviate its historical water scarcity. Capital expenditure saw an average increase of 17% every year between 2015-19 in contrast to a decrease of 35% in 2019-20.

Vendetta politics will cost people of AP
The article laments that journalists sitting in air-conditioned offices must not comment on the affairs of the state or accuse the CM of being another Tughlaq. However, it is evident that Jagan is displaying the same lack of empathy as the emperor, for people who must traverse great distances to demand justice, get permissions, or meet ministers for any kind of grievance redressal.

With the high court in Kurnool and capital in Vizag, people of North Andhra and Rayalaseema must travel between 600-900 km to demand justice or get any work done. This applies to officials heading departments and state bodies too. The police headquarters are located in Mangalagiri in Guntur district. With the government as a litigant in thousands of cases, top bureaucrats are frequently summoned to testify. The DGP himself was summoned by the high court several times this year.

Governance suffers if bureaucrats spend half the week shuttling between the two ends of Andhra. Virtual meetings could solve the issue of court appearances and meetings. However, a considerable amount of research has shown how the Indian bureaucracy is extremely dependent on paperwork and signatures of multiple personnel to minimize any potential blame. Splitting the capital will only exacerbate this dysfunction.

Decentralization is not achieved by situating a few state institutions in this or that city. Economic geographies and complex market linkages determine how cities and regions develop, not the shifting of government jobs. Nor is administration decentralized when all executive bodies are being set up in Vizag. It goes against the Sivaramakrishnan Committee’s recommendations to distribute administrative departments and bodies of the government across AP.

Vizag becomes even less of a people’s capital if it is being chosen at such obvious discomfort to the people and the administration. Amaravati is centrally located, has a glorious history as a Satavahana capital, and a Buddhist haven, and was being built by tapping into the entrepreneurial spirit of people and companies of Andhra, India, and the world. The chief minister is being extremely indifferent and even vindictive in what is widely seen as a political move. In unilaterally shifting capitals despite promising complete support to Amaravati during and before the 2019 elections, the leaders and cadre of the YSR Congress are abusing the people’s mandate. #KhabarLive #hydnews