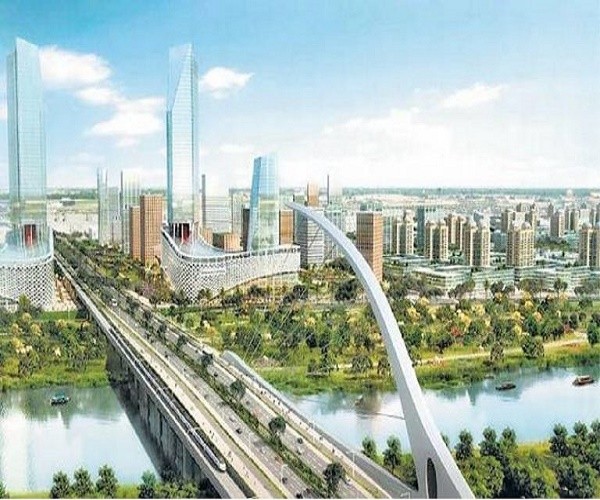 The design for what Amaravati will look like, along the banks of the river Krishna
The first phase of the dream capital city of Andhra Pradesh will be complete by the end of 2018, it is hoped. But delays, doubts & fears hang like a cloud.

Construction work on Andhra Pradesh’s new capital Amaravati has finally begun, and officials say the first phase of Chief Minister Chandrababu Naidu’s dream project will be complete by the end of this year.

Spread across 53,000 acres of land, Amaravati is being built virtually from scratch. Inspired by what looks like a mix of Singapore and cities that feature in sci-fi films, Naidu says he aims to make it the most “futuristic” capital city in the world. 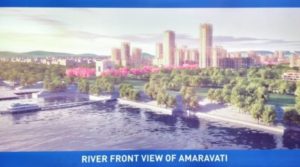 However, that vision has only just began to take shape. As ThePrint reported previously, Amaravati has been battling problems over design, environmental clearances and acquisition of 33,500 acres of land through a unique land-pooling scheme.

Announced on 1 January 2015, Amaravati has been designed by the high-profile architect Norman Foster, of Foster + Partners, after researching and analysing cities and countries around the world, most notably Singapore.

Engineering and design are complete, and physical construction has begun. The Singaporean firms Ascendas-Singbridge Pvt. Ltd. and SembCorp Development Pvt. Ltd. have been given the rights to construct. Over the last three years and four months, 95 percent of the land required for the project has been acquired.

The city aims to be completely environment friendly, and will be powered by solar energy. Traffic and vehicular pollution will be minimised through a “5-10-15” rule used in the city’s design — from any given house, all necessary and emergency services such hospitals and schools will be a 5-minute walk; open and recreational spaces will be a 10-minute walk; and work will be a 15-minute walk. 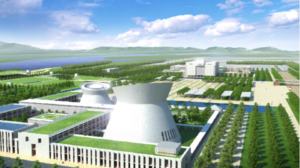 The Commissioner of the Andhra Pradesh Capital Region Development Authority (APCRDA), Dr Sreedhar Cherukuri, says 53 percent of the first phase of the project is complete. Phase I includes government housing and basic infrastructure such as roads and power supply, and will cost around Rs 50,000 crore.

The project’s promoters claim Amaravati will be one of the “happiest” cities in the world. The city hosted the Happy Cities Summit, an international conference on urban innovation and happiness, from 10-13 April. Naidu inaugurated the three-day summit attended by delegates from across the globe, including Finland and Bhutan, considered two of the happiest countries in the world.

“Make Amaravati your second home,” Naidu urged the participants, adding that the Andhra Pradesh government aims to use technology to enable participative governance and sustainable living to ensure a high happiness quotient.

A visit to the construction sites shows that while work has begun, not much has been accomplished yet, particularly in view of the project deadline of February 2019. 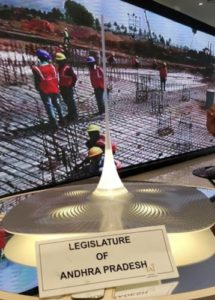 Construction work on government housing complexes — to be built using the ‘shear wall’ technology, which does not use bricks — has only just begun, but APCRDA says all complexes will be ready by the end of this year.

In all, 3,840 apartments will be built by the end of 2018, according to Zachariah Madasu, the chief engineer for Housing & Building at APCRDA

APCRDA claims work on all the other parts of Amaravati has also begun, although the only structure standing is the temporary secretariat, from which the Andhra government has been functioning since 2015. The building was constructed in a record 139 days.

Although the project has been publicised as a marvel of sustainable engineering and design, local activists have raised concerns about its ecological viability.

Anumolu Gandhi, a local farmer and activist, says the land Amaravati will occupy is prone to floods. The city will be built on existing floodplains, setting the stage for future disasters, he fears.

The area has flooded twice in the last 20 years. In 2009, roughly 29,000 acres of the 53,000 acres going towards Amaravati’s development were flooded by the Kondaveeti Vagu, a tributary of the Krishna river.

APCRDA says it has taken measures to protect the region from floods by introducing a “lifting scheme” — Kondaveeti Vagu will be widened, and four reservoirs will be built to avoid flash-floods.

Cheruku, the commissioner, said the National Green Tribunal has reviewed the entire project and given it a green signal. “The city is completely floodproof,” he says. 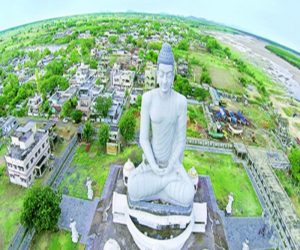 ALSO READ:  What Are The Four Options Open For Chandrababu Naidu To Parts Ways With The BJP?

The rejected initial design for the assembly building, which looked like an atomic reactor. Photo from Andhra Pradesh government. In his first innings as chief minister, Naidu enjoyed the tag of ‘CEO of AP Inc.’ — something that fawning industrialists bestowed on him. Naidu 2.0 wants to better that and go down in history as the visionary creator, not merely as an efficient manager, of Amaravati. But with little money coming from New Delhi to fund Naidu’s Neverland, it risks becoming a fictional faraway dream.

The new design for the Assembly Building | Photo from Andhra Pradesh government.
But the Sivaramakrishnan committee, appointed by the central government in 2014 to suggest where the new capital of Andhra could come up, had recommended a decentralised capital, instead of one omnibus centre. But Naidu chose to ignore its suggestions. He is committing the same blunder he made in Hyderabad when he was chief minister between 1995 and 2004 — ie., to develop only Hyderabad, ignoring other urban clusters in Andhra. 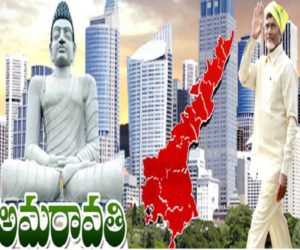 The ‘Classic Surrealism’ In ‘Telangana Politics’