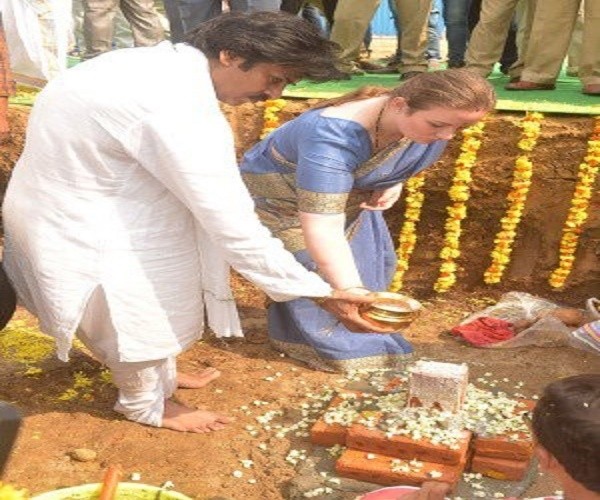 Two days ago, actor-turned-politician Pawan Kalyan performed “Bhoomi Puja” for his residence-cum-personal office building in his two-acre plot at Khaja in Guntur district, which falls under the new capital region of Amaravati.

Pawan said once the construction is over, he would shift his base to Amaravati and obtain a voter identity card to become a permanent citizen of Andhra Pradesh.

So far so good. But one wonders why Pawan has taken a decision to construct his house at Amaravati, when all the other political leaders including Telugu Desam Party chief N Chandrababu Naidu and YSR Congress party chief Y S Jaganmohan Reddy have not dared to have their own houses there, but continue to live in Hyderabad.

According to highly placed sources, it is actually Naidu’s plan to bring Pawan Kalyan to Amaravati ahead of others.

The land where Pawan is constructing his house is in the prime location in Amaravati and the value of land is not less than Rs 20 crore per acre.

However, Pawan bought the land at a surprising rate of just Rs 20 lakh per acre last month.

And as everybody knows Lingamaneni family has close relations with Naidu and it was in the guest house of Lingamaneni at Vundavalli on the banks of Krishna river that the chief minister is staying at present.

Sources say Naidu had helped Pawan to get the prime land from Lingamaneni at a cheap rate for obvious reasons – the Jana Sena Party would come to the rescue of the TDP in the next elections.

At the same time, Naidu’s idea is to get the land value jacked up and land sales pick up in Amaravati.

As the things stand now, there has been a slump in real estate activity in Amaravati due to lack of progress of capital works.

If celebrities like Pawan Kalyan construct houses there, it would definitely result in some movement in the land sales! #KhabarLive