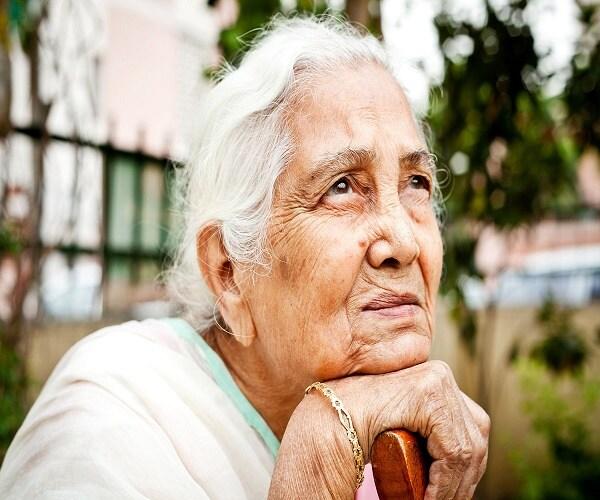 The plight of senior citizens in India is under a nationwide lockdown to tackle the spread of the novel coronavirus, bringing life to a standstill for many. However, for some, the situation looks even grimmer.

When Rukmini Sheshagiri Rao, a singer and resident of Hyderabad was standing outside her apartment in Banjara Hills area, her neighbour, an 85-year-old woman who stays just two floors above her house, came down with a request – “Are you heading out? Can you please buy a packet of milk for me? I’m scared to step out.”

Listening to her neighbour’s request, Rukmini shares that she was moved and at the same time struck with the realisation of how hard the lockdown will be on the elderly and those with special needs.

A few days later, (Greater Hyderabad Municipal Corporation) GHMC’s announcement that all delivery of cooked food by private delivery services like Swiggy and Zomato as well as by private kitchens has been banned in the city, came as a hard blow. While the safety of delivery persons needs to be taken care of, the ban has put the elderly and the persons with disabilities in Hyderabad are in a very difficult predicament.

“We may be able to manage with just a couple of packets of Maggi and pasta but these people have needs. Some people are diabetic, some have osteoporosis, there are those with renal problems, etc. I thought we should be doing something,” Rukmini shares with #KhabarLive.

This prompted her to post on social media asking for volunteers to come forward to deliver home-cooked meals to the elderly in the city. She also nominated her own 17-year-old son to serve as an inspiration for the other youngsters. “A lot of daughters and sons from abroad have called us saying their parents were staying alone. What started with five people has now become 70,” she says.

But their operations have been cut with the announcement that has come from GHMC. “We spoke to the authorities and we understand what they are trying to say, that we could be a carrier and are essentially putting the elderly at risk. My only concern is of the people who are sick and living alone. Something needs to be done for them, something government approved. I’ve had senior citizens calling me up crying since they have not been able to eat, asking if we can send breakfast,” she explains.

Rukmini also talks about the challenges this includes. “There was a 90-year-old man who called us saying he hasn’t eaten in two days. There is a cancer patient, undergoing chemotherapy, who cannot take care of herself alone. A woman needing dialysis called us and we were unable to transport her to the hospital. She ended up paying Rs 1800 to the dialysis centre to take her for her treatment. If the government can at least organise ambulance services for those needing dialysis it will be of great help. There are unique requirements like these,” she elaborates.

The corporation clarified that e-commerce portals like Big Basket, Amazon Pantry, etc will be exempted from providing dry rations, groceries, vegetables, fruits etc. on condition that they strictly followed protocols of ‘contactless delivery’. And Rukmini says she has not given up hope. “We are now trying if we can use these approved e-commerce platforms to deliver a week’s worth of rations like bread, oats, cornflakes etc. and replenish next week. We are discussing how this can be done.”

For a lot of people who rely on caretakers the situation is grave. Hyderabad-based SEVA Trust that has mobilised itself during many other natural disasters like the 2018 and 2019 Kerala floods and Cyclone Gaja in 2018, has now shared a helpline number for the elderly. Amjad Khan, its trustees, tells #KhabarLive that the main idea is to support the elderly and the immuno-compromised in the city. “The elderly have all kinds of problem. If there is no drinking water, they need help. Someone suffered a heart attack just now and we organised for an ambulance while one of our volunteers was trying to support his wife who was shaken over the phone,” he explains.

ALSO READ:  All 'Errant' Junior Colleges Comes Under 'Strict Vigil' On Intermediate Board 'Affiliation' In Telangana

Helping Hands Foundation, a school and residential care for people with special needs urges the government to consider the predicament this lockdown has caused to persons with disabilities. “The Chief Minister announced relief for auto drivers, construction workers but not us. This is indeed painful that we’ve been neglected,” he says.

Helping Hands urges us to think about the difficulties a person with disabilities will go through during this period. “Firstly, we need safety. There are people who will be unable to take care of themselves and so with this pandemic, it is important that the person taking care of them is clean, in addition to themselves being clean. There are people who use their hands to move from one place to another. How about their hygiene? Has the government considered the safety measures for them?” he asks.

Access to food too during this period has become very difficult. “Food should be delivered to the doorstep for persons with disabilities. The government has to take more responsibility in this regard,” he adds.

Even with helpline numbers and e-commerce platforms that might temporarily solve food problems, the fact that there are many who need the support of caretakers to get by in their daily lives is undeniable. “Caretakers are a major issue. We can’t even facilitate their transportation unless the government permits. Perhaps the only solution would be to identify those who need daily support and move them to a temporary facility where this help can be provided. The government will have to step forward,” Amjad suggests.

Amba Salelkar, a Hyderabad-based lawyer and disability rights activist explains that community support could be beneficial. “There are some merits in the government acting with abundant caution. The problem is that there is no alternative. People are in a very precarious situation. Therefore community support is important here.”

She continues, “We need a mapping of people who are vulnerable and this is something that we’ve been talking about since the time of the floods. It continues to be the issue,” she points out.

While acknowledging that it is important to consider the safety of delivery persons too, she adds, “The real onus should be on the government to bridge the gap. It should have been put in place before it was banned.”

Amba puts forward an important point of community participation in times like these. “People in the neighbourhood could step up. There is no one-size-fits-all solution for this. There are people with psychosocial issues. They may be fine initially and then down the line, they are faced with anxiety or depression. How do you make sure people are not slipping down the cracks? This lockdown can be triggering for people and it is important they get that support from the community,” she adds.

However, this cannot be a community-led exercise alone she points out. “This can’t be entirely voluntary, the government needs to play its role.” Rukmini too agrees. “If the Corporation can facilitate deliveries and attend to special needs, we will gladly share our crowd-sourced information to help.” #KhabarLive

Why ‘Migrant Workers’ Are Called ‘Married Bachelors’ In Gulf Countries?

The Making Of Sweet Wonder – A ‘Sugar Protein’