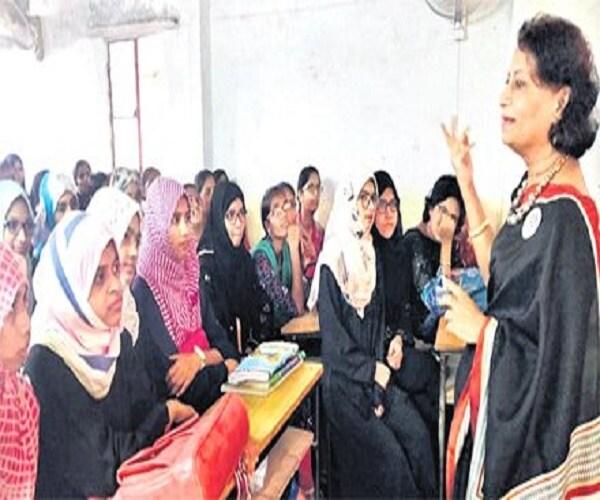 Everybody has their own journey in life; it’s up to you how you design it. Meet Amina Hussain from AC Guards in Hyderabad who loves to study and also tries to help others by motivating them through her counselling.

Amina’s journey would definitely inspire many. Having gotten married early, she took a long break from her career. The mother of three kids says: “After marriage, I was busy taking care of my children and gave more attention to them. Meanwhile, when I was free, I used to take tuitions to my maids who worked for me. I thought they should also learn basic things and stay independent. One of my maids is a Telugu teacher in a government school now.”

The counsellor also reveals that when her kids were independent and started working, she thought that she should start doing something else for herself as well as the society. “I opened a computer institute in 1990 when computer was a big thing for many people. I saw the mindset of some orthodox families. Though I can’t change everybody, I thought of doing my part by helping a few. They were few girls who used to come to me and I would give free classes to women who could not afford it,” she says.

Amina closed down her institute when her father was sick. “I had a love marriage and my parents accepted me after many years. And I thought it would be a privilege for me to take care of them when they needed me the most. So, I had to bring down the shutters on my business and take care of my father when he was sick.”

After her dad’s terminal illness, Amina made up her mind to get into something related to the medical field. “I have seen a job vacancy for medical transcription and applied for it when I was 43 years old. I got selected for a higher position, and worked there for two years. Later, I started my own medical transcription services with six women working for me. I give them freedom to work from home,” she says.

Amina didn’t want to limit herself and started exploring various fields — right from working as a freelance counsellor to going for field trips, to counselling young girls about menstrual hygiene, social work, early marriages, etc. Recently, she started her own NGO called ‘Kaam Counselling Services’ and is looking forward to more volunteers to help make the society better. #KhabarLive