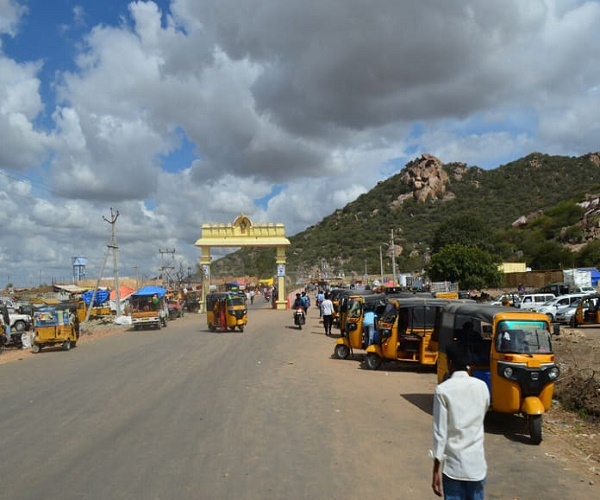 The ‘Poor man’s Tirumula’ is the popular pseudonym for Kurumurthy temple touted to be one of the oldest in Telangana, built 900 years ago, in 1268 AD by the royalty of Mukkera dynasty, Gopalarayudu. There is a reason why. This temple of Lord Venkateswara too is nestled in the seven hills of Ammapur village, Chinna Chinta Kunta Mandal, Palamuru district (Mahbubnagar), and it is believed that the hill where the deity resides is indeed a part that fell off the Ananda Giri of Tirumala. The deity originally resided in a cave that was eventually carved out to build a temple for ease of the visiting devotees.

One can see a glimpse of the cave in the sanctum sanctorum and by climbing another flight of steps to enter the small temple of Goddess Lakshmi Devi, where the idol continues to be tucked in a small cave. While Lord Kurumurthy looks resplendent in a standing pose and with the unusual feature, a moustache, the idol of Lakshmi carries a radiant mysticism that fills the hearts with devotion.

Kurumurthy attracts devotees from AP, Telangana and Karnataka, who come to offer their prayers, especially during the popular jatara (festival) that happens in the Telugu month of Kaarteekamasam.

The Brahmotsavam held during the holy month after Diwali is a significant one when a series of unique rituals are conducted for the deity and the temple adorns a festive mood. The devout come by train, by road, in buses, autos and bullock carts, which, parked along the roads is the first sight that catches your attention on reaching the arch of the temple. Many of them stay put, to offer puja and revel in the festivities.

You see rows and rows of shops selling sweets, scores of mutton stalls, several carts making mutton grills and other delicacies, makeshift kiosks selling knicks and knacks, bangles, toys and such other paraphernalia typical of a temple jatara. One can also see black earthen pots selling in dozens. These pots are used to cook food for the deity as Thanksgiving. The cooked food is called Dasangam that can be something as simple as Pachi Pulusu and rice, which is offered to the deity.

During the Brahmotsavam, the deity is decorated for 15 days with special flowers, clothes and jewellery that goes back to 15th century when one of the decedents, Raja Soma Bhoopal built the steps, got the ornaments for the deity made and initiated the festival. It is fascinating to note the local legend that during this time, despite thousands of people practically living in tents in the vicinity and enormous food on display, one does not see a single mosquito or a house fly in the area.

Yet another interesting tradition is the Uddala – the footwear made of cow skin especially for the deity, that is first taken in a procession on a cane tray (Chata), then placed in a special pavilion (mandapam) built for the purpose. Devotees stand in lines to get hit by the uddala, which they believe washes them off their sins. The uddala and the cane chata are specially made by two families of nearby villages, who have been doing the same since generations.

In addition to intriguing legends, historic past and interesting traditions, Kurumurthy surrounded by hills and dusty terrains is picturesque and a riveting sight for nature lovers. #KhabarLive

A History Behind ‘Street Names’ Of Hyderabad

An Oldest ‘Book Store’ In Old City Of Hyderabad With A...