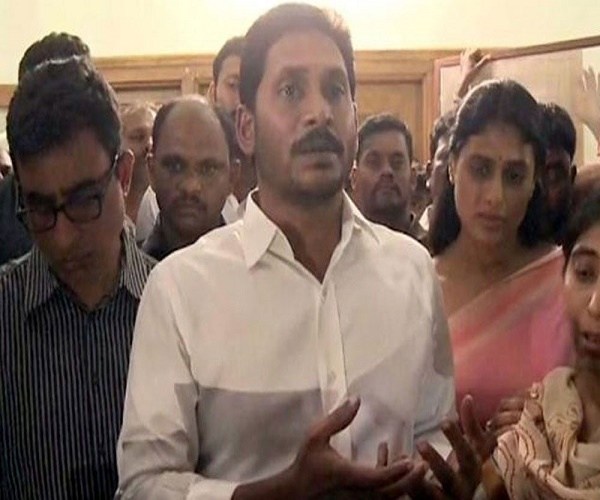 Though just about three weeks’ time is left for the polling in Andhra Pradesh, the political game seems to be hitting a new low and if the unfolding of various events is any indication, there seems to be a serious effort to see that the elections in the State are either postponed or if possible, the President’s rule being imposed.

What is more tragic is that even a ghastly murder is being used for political gains and both the Opposition YSRCP and the ruling TDP are indulging in accusing each other of masterminding the incident. The 68-year-old politician and brother of the former Chief Minister Y S Rajasekhar Reddy is Known as a down-to-earth and genial person.

Vivekananda was elected as MLA in 1989 and 1994 from his hometown Pulivendula in Kadapa district. He was elected to the Lok Sabha from the Kadapa constituency in 1999 and 2004 and to the Andhra Pradesh Legislative Council in 2009. He had served as the Agriculture Minister under N Kiran Kumar Reddy in the then united Andhra Pradesh. He had a difference of opinion with his nephew Y S Jaganmohan Reddy, after the latter quit the Congress but it was reportedly sorted out when Vivekananda joined the YSRCP.

His murder at this point of time seems to have come handy for the Opposition party which is making desperate efforts to come to power and the TDP which is equally desperate to retain power. There is nothing wrong in seeking a probe by some other outside agency but then what is most worrying factor is the leader of the Opposition time and again saying that he has no faith in the State police.

Any one party which comes to power has to administer the State with the same officials and the police force. At the most, they can transfer some officials and bring in people in whom they have more faith. Accusing the State police at this point of time could lead to annoying the force which could prove to be counterproductive.

What is more, the YSRCP on one hand demanded a CBI probe into the murder and the party president Y S Jaganmohan Reddy categorically stated that Vivekananda Reddy was attacked by an axe five times on head and that the attack took place while his uncle was on the bed and the body was later taken into the bathroom where he vomited blood.

The attackers smeared blood to the commode to make it appear that he collapsed and suffered injuries as his head hit the commode. Jagan, while demanding a CBI probe also questioned the integrity of the CBI Joint Director Laxminarayana who investigated his quid pro case. He tried to establish that Laxminarayana had close links with Chandrababu Naidu.

Recalling certain incidents starting from the killing of his grandfather Y S Raja Reddy and the unfortunate incident of the helicopter crash in Nallamala Forest Range which claimed the life of the then Chief Minister Y S Rajasekhara Reddy, Jagan alleged that Naidu had a role to play in these incidents.

The basis for his suspicion is that when the murder of Raja Reddy took place, Naidu was the Chief Minister. When his father died, Naidu as leader of the Opposition had challenged his father a day earlier that he would see how YSR would enter Assembly and it was again Naidu who was responsible for the CBI cases being foisted against him. All this makes him feel that it was the Chief Minister who was behind the murder of his uncle and that is why he wants a CBI probe.

Jagan said that Naidu now had even tried to kill him inside Visakhapatnam airport. Interestingly, the NIA which is a Central agency probed into the case had so far not found any such evidence.

In retaliation, the TDP is raising more dust. They argue as to how YSRCP president knew the sequence of events so clearly? In fact, that should be one of the areas which need to be probed by the investigating agencies.

They link this to the differences that took place soon after the death of YSR when Vivekananda Reddy had opposed the signature campaign by Jagan to become the Chief Minister even before the cremation took place. When Jagan walked out of the Congress, Vivekananda Reddy opposed it and he continued with the Congress and had even contested against his sister in law Y S Vijayalakshmi and lost the election. However, the differences subsided after Viveka joined YSRCP.

Against the backdrop of this situation, the TDP says it has now become important for the investigating agencies to find answers to questions like why Vivekananda Reddy was alone at home and did not have even one assistant.

How did the attackers enter the house, who saw the body first and whom did they inform first, who shifted the body from the bathroom where it was lying in a pool of blood to bedroom and why did they not reveal that he did not die of heart attack but was brutally murdered till two hours after the news first break on media.

It is also surprising that no CCTV cameras are there around the house and the police are now trying to find out if there were any CCTV cameras installed at least somewhere in the vicinity. The yellow brigade also alleges that this was nothing but typical Bihar style political game.

It is really painful to see that on one hand a murder has taken place and within hours it assumes serious political overtones side lining the real issue as to who the real culprit is. When will the politicians start depending on their promises and performances? When will the ‘Acche Din’ arrive? #KhabarLive

Why Criminals Should Fear As ‘Nirbhaya Act’ Unimplemented And ‘Nirbhaya Fund’...