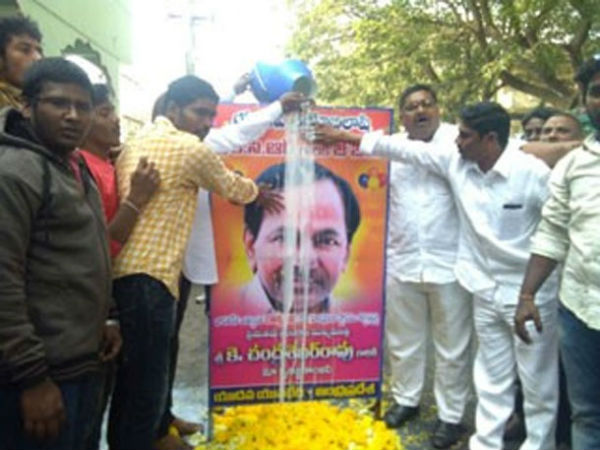 There have been instances in the recent times when people of AP expressed their reverence for Telangana Chief Minister KCR. Here is another such incident.

On Tuesday, Yadava community Sangham from AP honored KCR by pouring milk on his picture, giving his photo a milk bath, to show their respect. The event happened at Vijayawada Press Club in the presence of Yadava community leaders.

They cited that they were hugely happy with the decision of KCR to recognize their community in Telangana by promising to offer a Rajya Sabha ticket. The TS CM also allotted 10 acre land in Hyderabad outskirts and Rs 10 Cr for the construction of a building for Yadava Sangam. KCR’s decisions have been welcomed by the TS Yadava Community members.

In their bid to convey their gratitude to KCR for his efforts to develop their community in Telangana, the Yadava Sangam of AP has decided to honor the TS CM.

TRS cadres are happy to see the love being showered on their leader by AP people. They term it another example for KCR’s popularity in neighboring states, especially AP. #KhabarLive

Why India, A Gaint In ‘Vaccine Production’ Losing Trust And Confidence?

‘Desecration’ Of Portraits Sparks Protests In Hyderabad University Ahead Of Rohith...