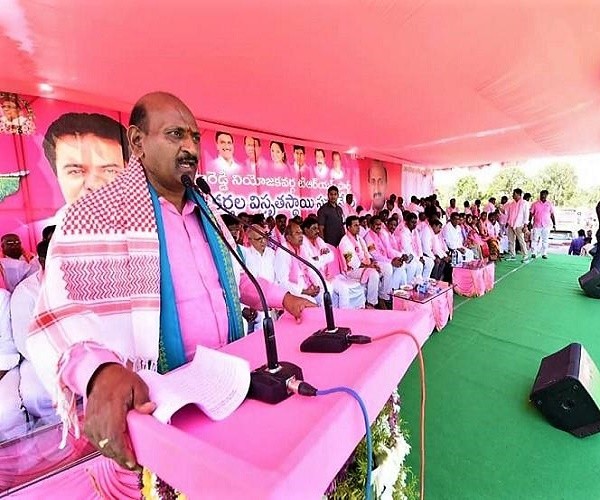 Election campaigning is moving ahead full steam in Telangana as the leaders of the main political parties in the state undertake whirlwind tours and address gatherings in a bid to woo voters.

Caretaker Minister KT Rama Rao, one of the star campaigners for the Telangana Rashtra Samithi (TRS), who is known for inculcating the local slang in his speeches like his father and caretaker Chief Minister K Chandrasekhar Rao, has been tasked with the job of garnering votes for the party.

On Tuesday, KTR addressed a huge gathering in Lingampet where cadres from two Assembly constituencies, Kamareddy and Yellareddy, were present.

Even as the sun rose in the town of Kamareddy, known for trade, all roads led to the nearby mandal headquarters of Lingampet, full of bike rallies with all participants donning pink coloured shawls and carrying TRS flags tied to their two-wheelers. 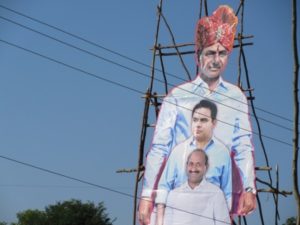 For context, the road leading to Nizamsagar, an irrigation project town, is notorious locally for its potholes despite the same MLA being in power for more than a decade. However, ahead of the election, it was patched up and all the vehicles including the minister’s convoy were seen driving smoothly along the route.

The local TRS contestants, incumbent Kamareddy MLA Gampa Govardhan and his Yellareddy counterpart Eanugu Ravinder Reddy, have both not been without controversy in the past, but that didn’t matter on Tuesday, as they were getting approval from the party’s top command.

After both of them delivered their speeches seeking re-election, KTR took centre stage and spoke on several issues, from highlighting the developmental activities of the TRS, to coming down hard on the Mahakutami or grand alliance consisting of the Congress, Telugu Desam Party (TDP), Telangana Jana Samithi (TJS) and CPI.

While expressing his wish that both Govardhan and Ravinder should hold on to their respective seats with a solid majority, he said, “As I saw the number of people headed here, I felt that it wasn’t a campaign rally but a success rally instead.”

KTR said that the area, which mainly depended on agriculture, has remained backward and undeveloped for decades despite rich resources and lands due to being part of united Andhra Pradesh. He said that if the TRS comes to power again it can provide irrigation water for 32 lakh acres, claiming that in the last year alone, the government managed to provide irrigation water to around 1.20 lakh acres.

Assuring greater agricultural fortunes through new reservoirs, he claimed that the area would soon become ‘another Konaseema’, comparing it to a delta region in Andhra’s East Godavari district. 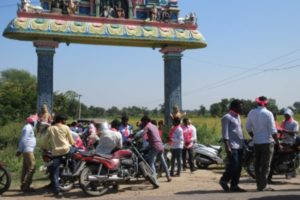 While stating that the agriculture sector was neglected in the erstwhile state with no funds, unlike in present-day Telangana with Mission Bhagiratha and Mission Kakatiya, he alleged that the Congress had tried to halt development by filing as many as 200 cases in courts. He also called Congress the “most unethical party in the country.”

Alleging that the local Congress leadership has never worked with ‘self-respect’, he mentioned how parties in Karnataka and Tamil Nadu would come together when it came to state interests, unlike the Congress leaders in Telangana.

KTR also lashed out at Professor Kodandaram of the TJS, which is part of the Mahakutami, for having an alliance with the TDP and Congress.

“Have you asked the permission of any martyr’s family before forming an alliance? You are now joining hands with the same people who are the reason for hundreds of youth suicides,” he said.

KTR, while showcasing a set of documents to the gathering, claimed that those were 30 letters written by Andhra Chief Minister and TDP chief Chandrababu Naidu, in which he allegedly sought the halting of irrigation projects in the state. Calling the alliance a threat to Telangana, KTR alleged that it will cost the interests of the state’s farmers.

While taking potshots at Congress chief Rahul Gandhi, who addressed a meeting at Kamareddy earlier this month, KTR said that the meeting was full of lies. “Congress has no cadre and TDP has no leader,” he remarked.

He added, “We don’t have any alliance with the BJP and we are not afraid of Modi or the Congress or Chandrababu. The people are our bosses.”

While asking TRS cadres to ensure a comfortable majority, he also dropped hints of KCR’s plans of a federal front stating, “We will play a role in the upcoming union government.”

Yellareddy is a constituency known for its predominant population of Reddys, an agrarian dominant caste with considerable political and economic clout, followed by members of the SC and ST communities and then OBCs.

Though many disagree that caste-based equations work in the area, past history cannot be overlooked. Ravinder Reddy has won four Assembly elections in his political career with the TRS, even though some locals allege that he was involved in land grabbing cases. 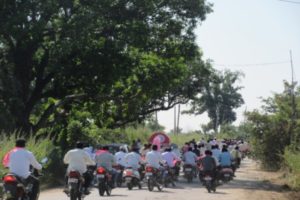 Just earlier this month, the incumbent MLA’s ‘promise’ of Rs 5 lakh to constituents if they elect him unanimously was caught on camera, forcing the Election Commission to file a police complaint against him.

Reddy, known as a leader close to KCR, is making all efforts to regain his citadel, Yellareddy, which he has stormed for his party right from its inception. He is up against Congress leader Nallamadugu Surender, belonging to the Munnuru Kapu (OBC) community. In fact, both of them began their political career in the TRS.

While some at Tuesday’s event insisted that it would be a cakewalk for the incumbent MLA, others disagree.

On the road leading to Lingampet lies the village of Krishnajiwadi in Tadwai mandal, where the constituency of Yellareddy begins. On Tuesday afternoon, nearly a hundred TRS men gathered to begin the rally to the venue, led by village TRS president E Rajireddy.

As this reporter veered the conversation towards the TRS grand rally and the ongoing scene in the village, Rajireddy said, “For now, things are in favour of our leader, but we can’t say there is no competition at all.” He further felt that there can be a greater change in the political situation based on the Mahakutami’s candidate.

After crossing Tadwai, somewhere near Yerrapahad village, a young farmer introduced himself as Ganesh said, “Everyone is looking at Ravinder Reddy as the winner.” When asked if the large crowd was for Reddy or for KTR, Ganesh just smiled and moved along.

However, one thing noticeable was the presence of fewer women in the gathering.

In Musthapur, a tiny village known for toddy, situated less than 5 to 6 km from the TRS venue, three women farmers and a man were seen busy cutting paddy, even as the road next to their field was busy with vehicles heading to the rally.

Balavva*, a Dalit woman farmer in her 50s, said that she owns 1.5 acres of land. When asked if they planned to attend the rally, she said, “Politicians will come and go, but we have to do our own work. Who will do this otherwise?”

When asked if they want to see another tenure from the TRS, Balavva claimed that she had no other choice even though she disliked the candidate.

“We managed to cultivate this paddy as there was power supply and water supply,” she said while holding a fistful of paddy crop. When asked why she disliked the sitting MLA who hails from the neighbouring village, she alleged, “Whatever funds come for development are always eaten up by his aides mostly.”

Pochavva*, another woman farmer, continued working while telling this reporter, “Officials took my identity proof and photos saying that I would get a double bedroom house sanctioned but nothing happened.”

In a desperate tone, she asked, “Should I still vote for them? Is so, why?”

The third woman, Narsavva, is seeking government compensation and claimed that her cotton crop was damaged. “Even if KCR wants to do good for us, the local leaders will not let it happen. Only the rich are being benefitted,” alleging that rich farmers benefitted hugely from the Rythu Bandu Scheme (government assistance for farming, where Rs 4000 is given per acre).

While there is considerable dissatisfaction and anti-incumbency on the ground against Ravinder Reddy, it seems that the top leadership of the TRS, including KCR, continues to enjoy the support of voters given the ‘populism’ in Yellareddy. #KhabarLive