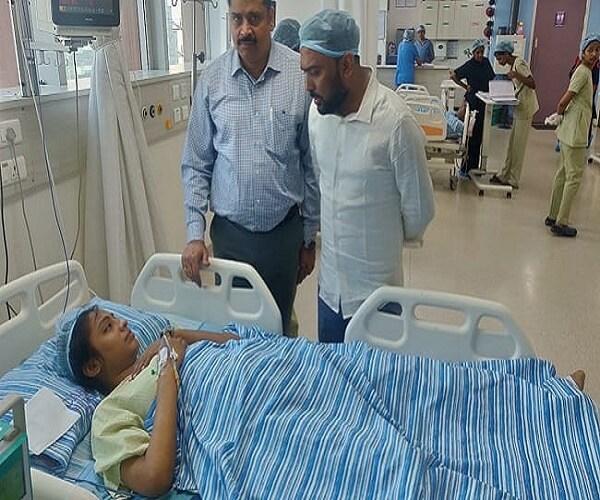 She was admitted to Care Hospitals at Gachibowli, where she is undergoing treatment.

Kubra, an engineering graduate from Anantapur, was talking to her father Abdul Azeem, a painter back home, to share the good news that she got selected in an interview for a software job, when the accident took place.

Soon after coming to know about the incident, Azeem along with his wife and son, rushed to Hyderabad on Sunday and was shocked to get a bill for Rs 1.10 lakh for treatment for Kubra.

The doctors at Care Hospitals told the family that Kubra received multiple injuries and it would require Rs 5 lakh for the complete treatment.

Azeem, who had already borrowed Rs 30,000 from his relatives in Hyderabad, had no other way to mobilise money for his daughter.

When a Sakshi reporter noticed him running helplessly from pillar to post to get her treatment and enquired with him, Azeem said the police were not coming to their rescue. He lamented that he had no resources to mobilise resources for her treatment.

When Azeem’s anguish was published in Sakshi, the Andhra Pradesh chief minister read the report and responded quickly.

He sent his Social Media coordinator Devender Reddy to Care Hospitals to take care of the needs of Kubra and her family.

He conveyed to the Hospital authorities that the Andhra Pradesh government would bear the entire expenditure of her treatment. The chief minister also offered job to Kubra, once she gets well.

Why ‘Journalists’ And ‘Doctors’ Harassed by Hyderabad Police During Curfew Time?

A Family Trip To Hyderabad, A Fantastic Idea Of Comfort Travel