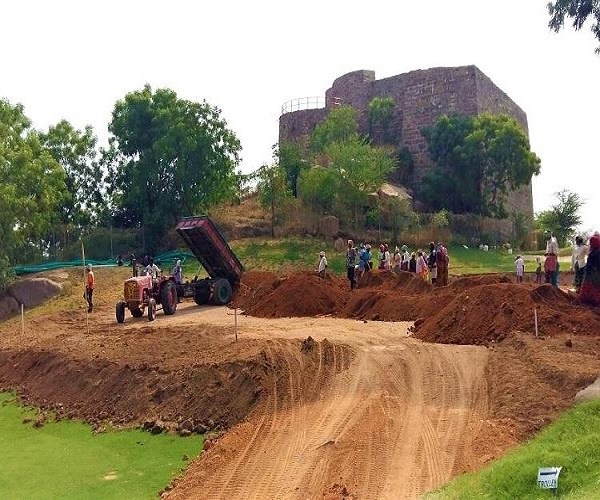 It is sad enough that heritage is not a priority in the new development planning paradigm but it is worse when the agencies designated to protect heritage themselves go on a rampage. The Archaeological Survey of India (ASI) in Hyderabad now seems to have made it a habit of this with rapid construction on at the historic Golconda Fort, building toilets and facilities. Rules, regulations, scientific principles, heritage conventions and mandates, ASI breaks them all.

The historic Golconda Fort, an outpost of the Kakatiyas, the citadel capital of the Golconda kingdom and origins of Hyderabad city, was built, strengthened and expanded by different Qutb Shahi rulers from the 15th to 17th centuries till the Mughal invasion in 1687. Each of the parts of the Golconda Fort complex and outside signify architectural, archaeological and historical values of high importance for Hyderabad, for the two Telugu states and the Deccan region.

With regard to heritage status, while the Inner Fort/Balahissar area and the Outer Fortification walls are declared Protected Monuments of National Importance under the custodianship of the ASI, the area within the outer fort walls is occupied by the Cantonment to an extent, the remaining by colonies falling under GHMC jurisdiction. Within the fort, the State Archaeology’s (Telangana Heritage Department) role is limited to only two monuments, besides having the Qutb Shahi tomb complex, located outside the fort, under their hold, which is being restored by the Aga Khan Trust.

The ASI has now started digging parts of the Inner Fort, near the Durbar hall up the hill, in the Nagina Bagh, on the north of the clapping portico and outside the entrance of the Balahissar gate, near the ticketing counter in order to construct visitor facilities such as toilets, locker rooms, etc. It is said that there are proposals to build more on locations up the citadel area, and work has started at these spots.

While facilities are welcome, what is shocking is the way ASI has taken action, potentially nay definitely, damaging to the monument under its own control.

And this is not the first time that ASI has done so in Golconda Fort.

In the last three decades, the ASI has cleaned up the inner fort area many times, clearing vegetation, making new pathways and taking up repairs. No doubt the changes made the fort area more accessible and safer, but ASI, with its battery of trained experts, seems to have forgotten the rules of minimum intervention and material authenticity while clearing the area. The ASI erased archaeological mounds and debris, excavations were carried out in the Rani Mahal complex exposing floor levels which necessarily did not match the dates of the structures around. The chairs and cables for the Sound and Light show though made of replaceable material remain permanent in the line of vision.

In the scale of errors, a real low was when it came to permitting a golf course in the Naya Qila area in the early 2000s. In spite of vociferous protests by heritage activists and orders by the High Court to restore the status quo ante, ASI did nothing and the golf course changed the contours of the fort permanently. No doubt the Hyderabad golf course has made beautiful greens out of hitherto unclean surroundings, but what is sad is the way the ASI has granted a green signal for the golf course, has turned a blind eye towards the developments, protests and even court orders and, still worse, is said to be a part of the management of the Hyderabad Golf Association (HGA), according to the HGA website.

ALSO READ:  Gas And Bloating Bothering You? Drink This 3-Ingredient Ayurvedic Concoction And Get Relief

The Naya Qila is the area added by Abdullah Qutb Shah after the Mughal attack in 1656-57. The rocky outcrops, water bodies and vegetated area was walled as a defence strategy. The original landscape, sparsely built with two historic mosques, a baobab tree and Persian gardens set within the magnificent fort walls remained picturesque till it was replaced by the manicured landscape of the golf course.

The new zeal for sanitation at Golconda Fort is admirable if only it did not violate international as well as laws of our own land pertaining to heritage protection and preservation – of international codes such as the Charter for the Protection and Management of the Archaeological Heritage, 1990, Burra Charter 2013, considered to be an expansion of the Venice Charter 1964, the ICOMOS Historic Gardens Florence Charter 1981, and laws of our own land, some of them made exclusively by and for this very organisation.

It is basic to conservation philosophy to follow minimum intervention principles and avoid using irreplaceable materials and methods of construction while carrying out additions and alterations in cultural properties. Using retrievable, detachable or movable constructions is an acceptable norm in conservation world over, which is considered as sensitive intervention without damaging antique material and the spirit of heritage significance. But ASI seems to have forgotten such options.

While digging up archaeological grounds is a serious let-down by the ASI in itself, the use of brick and cement technology for building of facilities in the 21st century is unacceptable, considering the range of innovative technologies and light, less harmful materials available in the market. What the ASI has taken up now cannot be called even outdated, because the laws of antiquities were drawn up as early as the 18th century by the British. The works being carried out by the ASI are going against the fundamentals of the Archaeological Acts, old and new.

The ASI, under the Ministry of Culture, is the premier organisation for archaeological researches and protection of the cultural heritage of the nation. Maintenance of ancient monuments and archaeological sites and remains of national importance is the prime concern of the ASI. Besides, it regulates all archaeological activities in the country as per the provisions of the Ancient Monuments and Archaeological Sites and Remains Act, 1958. The Protected Areas restrictions are unequivocal in terms of what can be and cannot be done at the monuments.

At one go, the ASI seems to be making a mockery of its own code by John Marshall and its simple blue board displayed at every protected monument warning trespassers and vandals of grave action. The conservation profession is bound by a code of ethics and professional practice. The question begs to be asked if the officers of the ASl, qualified and authorised professionals, are exempt from codes. In the case of damages to Golconda Fort, will the ASI be prosecuted?

Many attempts were made in the past to enlist Golconda Fort on the UNESCO World Heritage List but were unsuccessful for the very reasons of inadequate conservation and management. With such insensitive constructions by the ASI further damaging the monument, the hope for a World Heritage tag for Golconda Fort may very well be lost forever. #KhabarLive