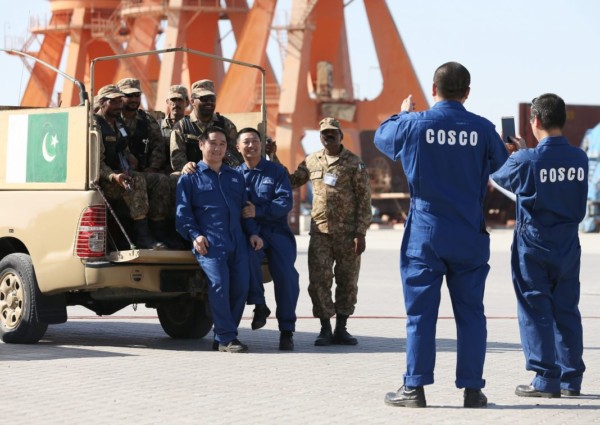 There is a new cultural wave afoot in Pakistan because of the much-flaunted China-Pakistan Economic Corridor (CPEC).

In a complex Pakistani society, arranged marriages gave way to internet marriages a few years ago. Now, we have a new phenomenon that is making headlines. It’s when the Chinese and Pakistanis marry each other. Our news headlines are calling it ‘CPEC marriages’.

When the first such marriage was reported, it was taken as a beginning of new bond between the two absolutely divergent cultures. More than two-and-a-half dozen TV cameras captured the wedding and its festive moments, which were aired repeatedly. Social media also chipped in with cheer and sarcasm.

There is a new cultural wave afoot in Pakistan. You visit the big cities, small towns and even the remote areas — the new faces that you will see these days are not Americans or Afghans, but Chinese. This transition has come about in less than half a decade, in the wake of the much-flaunted China-Pakistan Economic Corridor (CPEC).

CPEC’s economic and strategic promise is extravagant – it is not just a “game changer” but a “fate changer”, some say. But the debate is largely dominated by geo-political insights. The socio-cultural repercussions of the Chinese initiative in Pakistan are scarcely mentioned or analysed.

Mandarin has replaced English as the language of opportunity in Pakistan now. The Chinese language is getting strong attention and Confucius Institutes in universities are imparting Chinese history and cultural courses. These institutes are also attracting decent numbers of students from all over the country. National University of Modern Languages’ (NUML) Confucius Institute alone enrolled over 450 students in 2017. Likewise, Peshawar University will also get a Confucius Institute this year with an aim to offer Chinese language and cultural courses. Activities at these Confucius Institutes go beyond merely learning the language. They also organise several cultural events, such as Chinese lantern festivals and monkey year. The institute at NUML also launched two Chinese-language FM radio stations that broadcast from Islamabad (FM 104.6) and Lahore (FM 95).

Prior to rejuvenated Sino-Pak economic ties, Pakistan’s national TV channel PTV used to air a short bilingual anthem in both Urdu and Chinese language, which was telecast every time dignitaries visited each other. The national broadcaster no longer waits for official visits, but the anthem is now aired daily.

When private TV channels are so obsessed with Urdu-dubbed Turkish dramas these days, PTV goes with the Chinese dubbing option. One of the most popular modern Chinese drama series, Beijing Youth, is telecast on PTV in the prime-time evening slot. A short documentary showcasing the benefits of CPEC projects is also televised across the PTV Network (eight channels consisting of news, entertainment, and sports) several times a day.

After the successful completion of CPEC Cultural Caravan Festival at the Pakistan National Council of Arts (PNCA) in February, the ministry of planning, development, and reform has arranged a special three-day cultural extravaganza in Karachi this month to celebrate the CPEC summit and special friendship. The event includes Tang dynasty songs and dance performances, which would take the audience back to ancient China.

Debating CPEC has equally become a fad among ordinary Pakistanis at social gatherings now. In fact, it has replaced the previously favourite political chat topics such as Americans in Afghanistan, Indians in Kashmir and Trump in action.

The critics of CPEC use phrases like ‘Chinese neo-colonialism’ to describe the new wave. But they don’t recognise the fact that China has barely attempted to subjugate foreign territories or built any colonies outside its borders.

The Chinese economic manoeuvring that has also unleashed a new cultural wave poses serious challenges to the already ethnically vulnerable Pakistani society. Around 27 languages are on the verge of extinction, according to a UNESCO report, but the government finds no harm in promoting Chinese.

The overflow of cultural influences may end up mirroring the proverb: ‘Kawwa Chala Hans Ki Chaal’ (He who apes others will never be himself). #KhabarLive

Why Social Media Is Blowing Up Democracy?

Saudi Arabia Banks On Beautiful Camels To Reach Out To The...