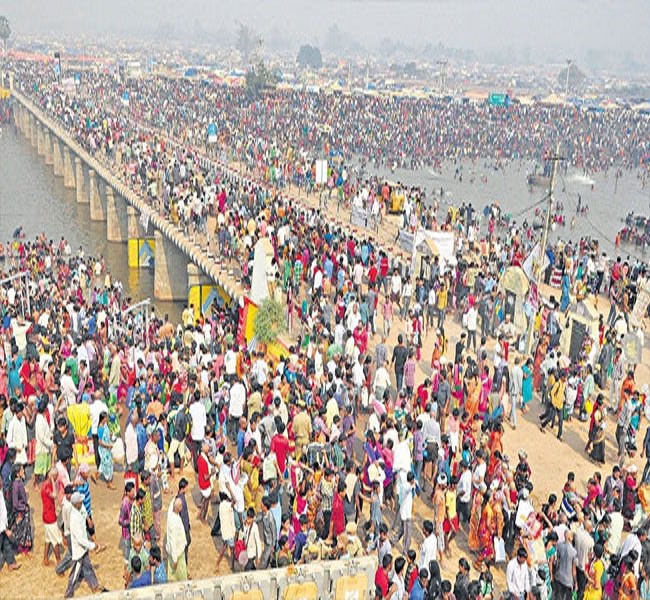 The tribal festival, ‘Sammakka Saaralamma Maha Jathara’ is all set to begin from January 31 in the forest of Eturunagaram in Warangal district in Telangana.

The festival will have tribals worship the tribal folk goddess, ‘Sammakka’.

Elaborate arrangements have been made for the festival by the district administration which includes distribution of 20 lakh water sachets, free Wi-Fi service and security around 10,000 police personnel deployed at the venue.

The officials informed that tribals from states – Andhra Pradesh, Madhya Pradesh, Chhattisgarh, Odisha, and Maharashtra are expected to visit the festival.

The four-day tribal jamboree organized by Telangana government as part of its tribal code to promote worshipping of trees, forests and preserve tribal culture and traditions from extinction will be rolled out as Sammakka and Sarlakka Jatra from January 31 to February 4.

Lakhs of tribal men and women come on bullock carts or walk through deep jungles from far and away to redeem their vows to protect trees of five states. As in the Avatar film, a festive atmosphere is dawning on the 50 sq km along the Mulugu -Eturnagaram highway. Entire families with women and children come in their best attires and full of devotion to the tribal queens who had made their community and village popular, spend few days at jatara meeting all relatives. They make merriment with tribal brewed liquor -ippa Sara, and tons of meat -chicken, goats, and buffaloes.

The jatara is also an occasion for the tribal families to firm up betrothals, tribal issues of land, health, drought, wild animals, family or village disputes as they sit with govt officials, elders, doctors. The jatara gives them an opportunity to see the outside world -modern world-motor cars, cell phones and also a variety of food, trinkets, bangles, household goods, clothes and also artificial ornaments.

The new initiatives launched by the government for benefit of Tribals and devotees include a folk museum and an amphitheatre built at Medaram for display of folk arts daily by over 300 artists. They perform all tribal dances like Dimsa, Gussadi etc.The museum will showcase all tribal instruments, bow and arrows, axes and traditional artifacts of all the nine to 12 sects of Koya, Gond, and Konda Reddy tribes and widespread awareness campaign on the social media-Facebook, Twitter, Instagram on the focus of Jatara to preserve and promote fauna and flora of the forests and respect and recognition of tribal lifestyle, traditions, and customs.

The tourism department and the Tribal food court will have a display of environment-friendly non-vegetarian and vegetarian and green products. Varieties of organic food, wild fruits and flowers would also be showcased by the forest department; Creation of livelihood options for tribals as part of Jatra – unique tribal homes on rental for tribal lovers to spend time in deep forests in coordination with AIRBNB –home stays concept.’ This is an opportunity for anthropologists, researchers, and students to acclimatize with tribal lifestyle ‘ says Gautam Deputy Collector.

The government plans to document in digital form and also text all the tribal rituals and practices performed at the Jatara for future reference and action. The entire preparations and arrangements made by government and involvement of local organizations would also be documented.

Over 5,000 mobile toilets and dressing rooms are being set up at the Medaram so that tribals and non-tribals desist from open defecation and increase prospects of infectious diseases and epidemics. Youth and service organizations were involved to keep them clean on a 24×7 basis 5000 water taps: To cater to the drinking water needs of the huge congregation over 5000 taps have been set. Besides potable water is drained from 50 bore wells newly dug in the area for the festival. More than 25 MLD of water is needed for both drinking and other uses on a daily basis says a senior district official.

ALSO READ:  The 'Growing Fear' And Unrest Inside 'Rohingyas Camp' In Hyderabad

As many as 2500 sanitary workers on 24×7 basis are being deployed for cleaning Medaram. For the first time, Government has focused on keeping the area clean even after the completion of the festival. It has hired 2500 trained sanitary workers to clean the surrounding areas of premises of worship and also the entire region of habitation.

A huge bathing ghat has been built at the Jampanna vagu where devotees first take a dip before they go for darshan and worship at Gadde, a platform where the tribal goddess’s Sammakka and Sarlakka are kept.

Nearly 4500 buses will be operated from all five routes to Medaram from January 28 onwards. Bus junctions have been separately marked so that devotees from all Telangana can pick their bus easily. The plan is to ensure at least one bus every 10 minutes in all directions will leave Medaram, says an RTC official of Warangal.

Security by 10,000 policemen and CCTV: Since Medaram is in thick forests and extremist infested with access to the dandakarayna region heavy bandobust is made for the protection of devotees and also the VVIPs. Over 10,000 police will guard the 26-50km region around Medaram and also all roads – both blacktopped and kaccha forest tracks and footwalks.All around the critical areas of Jatra special CCTV network is also organized for both direction of traffic and also for spotting movement of unwanted anti-socials and suspected extremists. ‘ We have responsibility for VIP security as the area is very close to Chhattisgarh, the epicenter of Maoists ” says a senior police official.

ALSO READ:  Why The Survival Rate Of A 'Baby Girl' In India Falls When 'Gold Prices' Go Up?

A special helipad is being organized for VIPS and also another for common devotees. The Tumbi aviation is putting up chartered chopper rides from Warangal and also for a 10-minute aerial view of the Medaram jatara

Tribals are given priority in auctioning of bids for tonsuring, the sale of coconuts, jaggery etc, parking lots, stalls etc.: The entire region around Medaram is decked up with parking lots to facilitate bullock carts, tractors, jeeps, buses, cards and other as devotees come on five routes too.” We anticipate more than 100,000 vehicles of all sorts and adequate parking lots created by clearing government lands and renting private lands and providing them with electricity, water and toilets ‘ says an official of I & PR.

The tourism department has also showcased the tourist spots of the region so that devotees after darshan at Medaram could go around the Lakkavaram lake, Tadvai wildlife sanctuary, other temples and picturesque places in and around the Warangal, Jai Shankar Bhopalapally districts.

In all the allotments of sales, services and auctioning for tonsuring, parking, the sale of jaggery, birds and also other goods tribals were given a major share. ‘Govt has decided that it was the tribal festival, and hence they should get maximum support. We only support or facilitate them ‘ says Chief Minister K. Chandrasekhar Rao.

After the formation of Telangana the Sammakka Saralakka Jatra is organized in a big way with full government and peoples support and already regarded as the state festival and efforts are afoot to get the tag of National festival. It is popularly believed as a festival of thanking giving by tribals and non-tribals of the region to the tribal queens -Sammakka and Sarlakka – hailed as folk goddesses by tribals, for the prosperity, health, and peace – bestowed by them folk goddesses. #KhabarLive

‘Blood On The Bedsheet A Must’: How This Indian Tribe Keeps...