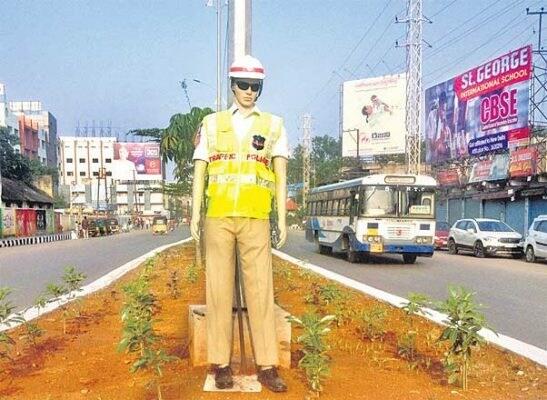 The mannequin traffic police system, which was first used in Bengaluru to regulate traffic, has been introduced for the first time in Telangana’s Karimnagar.

To overcome the shortage of traffic cops, the top police brass in the district decided to instal mannequins at different traffic intersections in the town. Of the 16 places identified for installation of mannequins, traffic police have already deployed them at six junctions near district headquarter bus stand area and other places. Commissioner of Police V B Kamalasan Reddy inaugurated them recently.

Donning the outfit of traffic policemen, along with reflector jackets, boots and sunglasses, the life-size mannequins look every bit like traffic cops. Small cameras have also been fixed on them, which are linked to the command control room.

Two cameras fixed in the eyes of the mannequins record traffic violations of motorists and send details to the command control room. Based on the images captured by mannequins, police impose fines on the violators of traffic rules.

The idea of using mannequins to regulate traffic seems to have come from effigies in agricultural fields to protect standing crops from birds. Traffic police bosses in Bengaluru have introduced 200 mannequins in the city to monitor traffic.

Speaking to #KhabarLive, Kamalasan Reddy said initially the mannequins were installed only in the town, but based on feedback they would be deployed in other parts of the commissionerate.

In the face of shortage of traffic police personnel at unmanned junctions, mannequins would be of immense help to the police, he said. #KhabarLive

Nowhera Shaikh’s Lawyer Withdraws From The Case On Differences, Investors In...

No ‘Personal Appearance’ For ‘Accused And Petitioner’ Till Further Orders In...

Political Tomfoolery Ahead Of General Elections In Telugu States