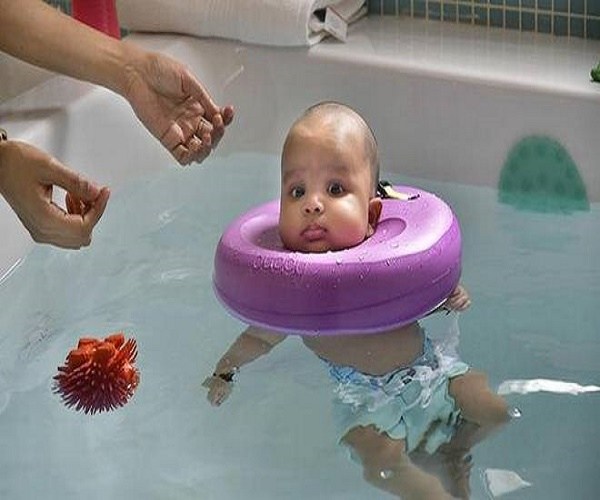 Your Baby Spa, which opened in Hyderabad a little over six months back, caters to customers as young as two days old, going up to eight months, helping them adapt to their new environment in a stress-free way.

Newborns, it appears, too, need a break from their routine to relax, and a spa in Hyderabad is doing just that. While we may have thought being a baby is easy, it turns out that with all the nappy changing, feeding, pooping and crying can be quite a stressful job.

Swathi Kolla, the 34-year old founder of the spa, chanced upon one such enterprise during one her visits to the U.K. “At the time, my son was six months old and the concept really intrigued me. I met with Laura Sevenus, who is credited with inventing the concept, and learnt about the ways in which it benefits the infant.”

The centre, set up at a cost of about ₹3 crore, is a part of franchise started by Ms. Sevenus in South Africa.

A baby’s visit to the spa involves hydrotherapy, in which babies float on water with a help of a special doughnut-shaped floatation device around their neck, which is followed by infant massage, priced at about ₹4,000 for a one hour session.

“It’s not common knowledge but babies experience a lot of stress from the plethora of new stimuli to which they are exposed since birth, leading to issues like constipation, irregular sleep patterns and crankiness. The infant massage and hydrotherapy help soothe the baby’s senses,” explained Ms. Kolla, an electrical engineer by training.

She said parents initially do express some apprehensions about how babies will float, and the quality of water. “We only use Bubby — a patented flotation device that’s totally safe and comfortable for the baby,” she claimed.

Your Baby Spa now caters to about 100 infant clients a month on an average. “We recommend a minimum of two sessions a week to see the benefits, and encourage parents to opt for packages that also turn out to be cheaper,” Ms. Kolla said.

Encouraged by the response to the baby spa services, she is now is looking at franchise-based expansion in cities such as New Delhi, Mumbai, Bengaluru, Kolkata and Chennai. #KhabarLive

They Still Addicted To This ‘Secret Ancient Food’ Which Exists In...