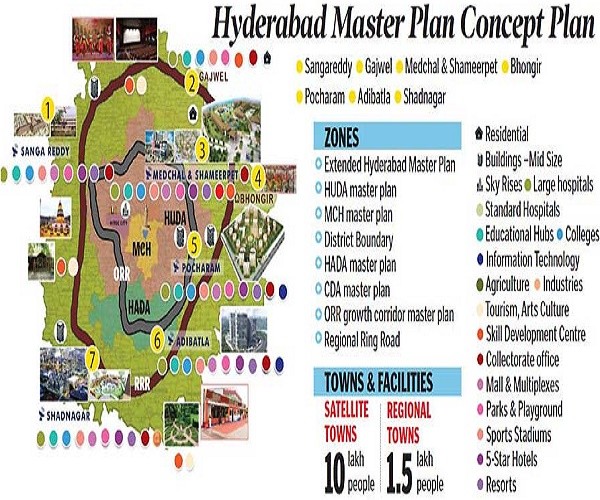 After the formation of Telangana, Hyderabad has shot into global limelight as one of the most liveable cities in India. While on one hand, the fast growing economy is providing opportunities for citizens to grow and fulfil their aspirations, on the other, the city is growing bigger by the day, making it increasingly difficult to manage.

We highlight the broad challenges as well as areas with potential and suggest four key strategies in a comprehensive approach for future planning and development of Hyderabad for policymakers, administrators and political leaders.

The focus has to be on regulating urban sprawl, providing efficient regional connectivity between Hyderabad and surrounding districts, leveraging Hyderabad’s growth to develop backward areas in the region, development of viable economic sectors to support all-round growth, provision of adequate water supply to sustain this growth and ensuring a balanced and good quality of life for the residents of Hyderabad and adjacent districts.

Hub for Telangana
Hyderabad has been historically known as a vibrant centre for art, culture, cuisine, trade and commerce. It has also been for many centuries an important political centre from where, always, a larger region has been ruled. Throughout the five centuries of its prominence, Hyderabad has been well-known nationally and internationally.

The turning point for Hyderabad post-independence came when the Telangana State was formed with Hyderabad being retained as the capital of the new State. This meant that the economic powerhouse of Hyderabad would now serve a comparatively smaller new State of Telangana.

After the creation of Telangana State in 2014, Hyderabad overcame uncertainties and continued on the growth path. Buoyed by innovative and development-friendly policies of the State government, it quickly became one of the fastest growing cities in India, winning multiple recognitions across the world as a preferred city.

Telangana now scores the highest in the EoDB index of India. Hyderabad is resurgent and its growth story is speeding. Investments keep pouring into Hyderabad ensuring the cycle of economic development continues to spur real estate development. An affable climate supported by good living conditions with higher standards of physical infrastructure and affordability makes Hyderabad among the most preferred destinations for work and home.

The Challenges
But like other cities, Hyderabad too now faces the problems of urban sprawl. Earlier attempts to prepare master plans/land use plans defining specific purposes for specific locations were intended to channelise growth and balanced development.

However, market economics ruled the type and direction of growth. Physical and natural environment took the first brunt of such growth. The economy kept growing but the city also kept expanding, putting immense pressure on the civic agencies to provide even the basic infrastructure.

It is important to note that Hyderabad is a radially outward growing city. The inner ring road is fully within the core city area. Next is the ORR (outer ring road), which is 162-km long and encircles around 1,800 sq km. The GHMC is around 650 sq km in extent and contained within the ORR. Most of this area is developed and constructed.

The RRR (regional ring road) is much farther away and almost co-terminus with the HMDA boundary. It is 330 km long and encircles around 7,000 sq km. Thus there are three major rings (two exist on ground and one in the planning stage) in the spatial structure of Hyderabad. Connecting these are the major arterials, which radiate outwards out of which there are 14 arms of National and State highways and other major roads, which form a broad skeletal network.

Ground Reality
It is well understood that Hyderabad kept growing exponentially and this led to a continuous increase in demand for urban land. Enabling a good life for the aspirant citizens who keep flocking into this historic city for economic prosperity is important. Master plans prepared were intended for regulating the growth and to have a balanced development while retaining the unique character of each area.

However, the ground reality clearly indicates that continuous expansion of urban development leading to unmanageable urban sprawl is making it quite a complex urban fabric. Economics apart, this has created a huge challenge for governments to manage civic services and for citizens to have a good quality of urban life.

With the creation of HMDA, the growth trajectory of Hyderabad, and the city being the hub for Telangana State, the key question for policymakers is what urban pattern should Hyderabad follow in the future? It is clear that static plans will only serve a limited purpose.

Land being a basic commodity for growth and an important factor for satisfying human needs, it becomes all the more important to use it properly and to strategise land development plans keeping in view the environment and human quality of life as a central theme for future development.

Dynamic Planning
What is needed for Hyderabad is a dynamic planning system, flexible yet structurally sound, regulatory in nature and proactive is channelising growth to intended areas and with required standards of living.

We will highlight four major strategies — compact city surrounded by satellite cities; integration of RRR with these cities; development of five backward districts and planning for drinking water — in the concluding part. These need to be explored and implemented as part of a holistic approach covering other major thrust areas to make Hyderabad future-ready.

The following four major strategies need to be explored and implemented as part of a holistic approach along with other major thrust areas to make Hyderabad future-ready.

1. Compact city surrounded by satellite cities
It is necessary to dis-incentivise urban sprawl but development planning should not be restrictive and should synergise with economic growth. Natural environment should be preserved with the help of efficient urban management systems.

Inclusive development and participation of citizens need to be integrated into mainstream planning systems. The concept of satellite cities/towns needs a tweak. Unlike earlier, when these were planned outside the immediate periphery of the main city, it is better that these new towns be much farther away from Hyderabad but efficiently connected by high-speed road and rail.

These should have major economic base/activities to sustain its population and have an urban ecosystem of its own. It may depend on Hyderabad for only a few higher order facilities. They should be located within the surrounding districts in such a way that the holding district also gets benefitted and should primarily serve the immediate hinterland.

2. Regional Ring Road is pivot
The HMDA area of 7,200 sqkm spreads far and wide into seven districts. Powering the whole of Telangana by utilising resources of Hyderabad and the sheer size of HMDA requires a fresh look in the context of development of Hyderabad vis-a-vis surrounding districts.

The key to this concept is the Regional Ring Road (RRR), which will connect other major towns with Hyderabad and more importantly with these new satellite towns. It will become a major connecting road to the hinterland.

3. Development of backward districts
The RRR will enhance the interdependence between the city and the larger region around it. It will connect the backward districts – Sangareddy, Medak, Siddipet, Yadadri and RR District. This will help trade and business to flourish and bring about better cultural connectivity.

Agricultural produce required for daily use in the city would be freshly available at the markets in an hour. Apart from residential and commercial pockets, the RRR will give backward areas access to employment, trade and commerce, modern education, health, sports and entertainment facilities.

Skill development
Skill development centres can be created in the five backward districts. These centres should have hostels and be equipped to train workers in building construction, readymade cloth tailoring, upholstery, plumbing, carpentry, electrical work, computerised bookkeeping, drafting, among others.

Tourism
An important sector for development of backward districts is tourism. The growing population of Hyderabad consisting of a large number of youngsters requires different holiday destinations for healthy, entertaining and refreshing outings. It will be useful to link natural scenic spots in the surrounding districts with the help of IRR and ORR and the connecting radial roads. The estimated two crore population of Hyderabad holds a huge potential for these tourism hubs, which will further support cluster development.

A holistic plan for Hyderabad with the new satellite towns and along the RRR will spur the required development pattern. It will also give a tremendous boost to the real estate industry in Telangana.

4. Drinking water for ORR & RRR areas
Drinking water requirement needs to be planned well in advance for the satellites cities, for water is the most important infrastructure requirement. Otherwise, there will be pressure on the system.

As per water department statistics, the water requirement for Hyderabad within five years would be 55 tmc and within 10 years, would increase to 70 tmc. In 15 years, we need to look for another water source. In this context, we must remember that in the last 70 years, we could source only 32 tmc.

This means a water crisis is looming and of a proportion, which can seriously impact the State’s growth story. However, we are expected to get another 30 tmc of drinking water and 15 TMC of industry water from Kaleshwaram. But for this foresight, Hyderabad would surely hit a water crisis. Kaleshwaram water to the city will definitely propel the growth engine of Hyderabad.

Master Plan
The Telangana Developers Association (TDA) has presented a master plan for satellite cities to the government. The cities should be density-controlled to suit the estimated infrastructure. The spillover can be accommodated in the next satellite city, which would be within an hour’s drive and within the urban fabric of Hyderabad metropolis.

We cannot let cities go beyond its estimated infrastructure as it will lead to a serious demand-supply mismatch. There is no doubt that Hyderabad will continue to grow due to its intrinsic strengths, favourable urban ecosystem and pro-active government policies. Hyderabad being a radial city, there are advantages of circular development as opposed to ribbon development.

The connectivity between IRR, ORR and RRR coupled with nodal development of commercial centres and satellite towns near the ORR would decentralise urban development in the Hyderabad Metropolitan region.

This model of Hyderabad would ensure unhindered urbanisation, balanced distribution of higher order activities and development on all sides of the city. This will translate into a boon for backward districts. The TDA suggests that comprehensive efforts be undertaken in this direction. #KhabarLive