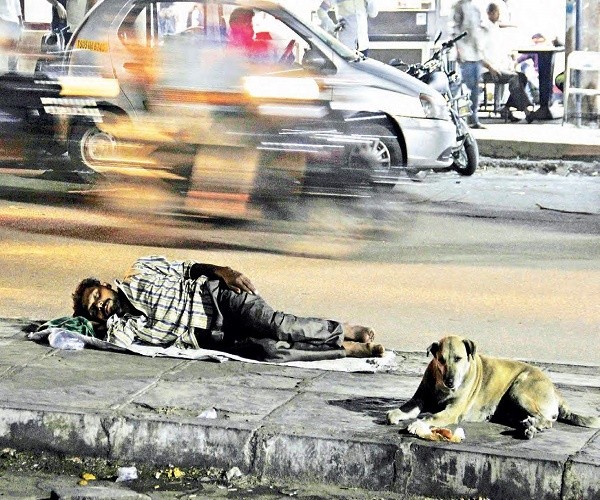 Speeding vehicles, extorting thugs, partying youngsters — threats faced by the homeless who sleep on sidewalks and pavements of Hyderabad are too many to count. But why do they then sleep on roads, when GHMC has established, though not in adequate numbers, shelters homes for them?

“It’s not like we want to live on the streets. But at shelter homes our freedom is curtailed to such an extent that we find pavements a better option,” they said speaking to Express. “We are asked to mop floors, do other odd-jobs at shelter homes. Besides, we have to be inside the home by a certain time. I am a free man and like my freedom. So I stay by side of roads ,” says Devraj, who sleeps near Secunderabad Clock Tower. However, NGO members and GHMC officials denied claims that inmates were made to work at shelter homes.

Unlike the common misconception, most of these homeless people are not without jobs. Some of them work as labourers at construction sites, or with catering contractors, or as assistants to carpenters and other skilled workers. If they manage to find work, they make anything around `100 to `300 a day. Reality or rumours of additional work at shelter homes is not something they find desirable.

ALSO READ:  Can You Pop A 'Paracetamol' To Ward Off 'Fasting' Withdrawal Symptoms?

“After a gruelling day of work, all that we need is a little space to sleep. If that is easily available by the road side, so be it. But, we are so physically exhausted that we cannot guard ourselves or stay awake worried about our safety,” says Devraj. There may be many footpaths in the city, but most of these people gather around select spots in the city — like Secunderabad Clock Tower, around Secunderabad and Nampally railway stations and Chaderghat cross road among others. “We sleep in groups, not because we have to energy to guard each other, but because it provides us a blind sense of security,” adds Devraj.

But the security of sleeping in groups barely helps. Around three-months ago, a 36-year-old homeless person sleeping on a footpath near the Keyes High School flyover in Secunderabad was run over by a van that fractured his leg. President of a NGO Nirashraya Shramika Sangatan, Syed Feroze said the driver managed to get away by paying a mere `200.

“When such incidents occur, we cannot work. That means we wont have any money to get by. And we don’t have anyone to take care of us. No one comes to rescue of homeless people who get hit by vehicle, or when they crash to ground after sun stroke. People think that those who are homeless also rob homes. But it is us who get robbed by thugs,” said Syed Feroze, who was homeless and slept by side of road for 11-months before forming the NGO.

Another homeless person chipped in to say that it is not only speeding vehicles they fear. “Gangs of four to five men come in autos, corner us by asking who allowed us to sleep there and finally take away the little money we have. Sometimes partying youngsters come in groups and throw rubbish or fling bottles on us and speed away on their bikes. I suppose they consider it as fun,” he said.

According to Supreme Court guidelines, there should be one shelter home for every 1 lakh population. That means, a city like Hyderabad should have at least 40 shelter homes while it has only 12 at the moment — 8 for men and 4 for women. Greater Hyderabad Municipal Corporation’s (GHMC) officials, who are tasked to provide shelter homes, say that they are aiming to establish 18 more shelter homes.

“Facilities like bedding material, lockers, `5 meals are provided at these 12 shelter homes. But at least 30 more such facilities are required,” says Indira, secretary of the NGO Amanvedika and the in-charge of two shelter homes. “Specialised homes should be made available for those with conditions like TB, HIV-AIDS and the elderly so that special care can be provided,” she added. “Government should also provide counselling and de-addiction services as most of them are impacted by the lonely life by the roadside.” #KhabarLive

‘Shaheen Bagh Of Amaravati’ Completes 80 days Of Protests For ‘Capital...