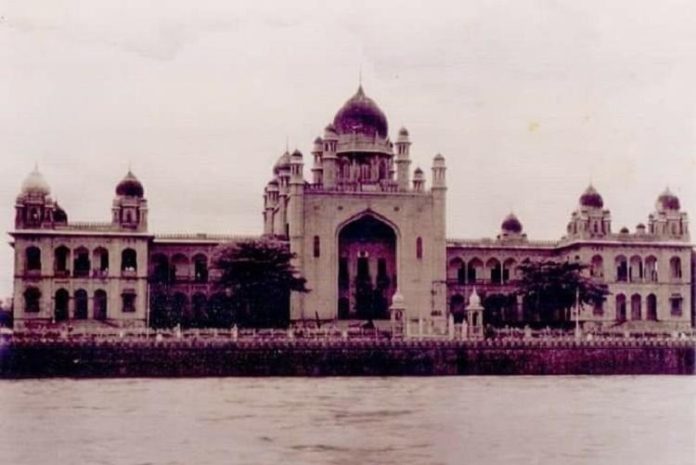 That’s the historical High Cout building of Hyderabad – The pink and white granite structure on the banks of the Musi River is a work of architectural brilliance from the Nizam era.

In another milestone, the High Court of Telangana is all set for its centenary celebrations on Saturday, completing 100 years of a rich legacy. Located in Hyderabad, the High Court building stands tall on the banks of the Musi River and is a work of architectural brilliance from the Nizam era. 1The High Court building, built in pink and white granite, attracts the attention of the locals and tourists alike as they cross the Musi. The imposing domes are visible from as far as the Naya Pul Bridge and provide an impressive view during sunset. It is one of the oldest and finest buildings in the city, reminiscent of the Saracenic style of architecture, a revival architectural style that was used during the British rule in India to build public and government buildings.

Even though the structure and style of the building is similar to many other Indo-Sarcenic structures in the country – Chatrapati Shivaji Terminal, Gateway of India, Victoria Memorial – the High Court building must be acknowledged a work of exquisite craftsmanship by architects in India. The plan for the building was drawn by Shankarlal of Jaipur and was executed by Mehar Ali Fazil, a local architect. It took three years to complete the construction of the entire structure and it was finally inaugurated by the seventh and last Nizam of Hyderabad, Mir Osman Ali Khan. “The High Court building was built on the ruins of the Hine Mahal and Nadi Mahal, Qutub Shahi structures, over a sprawling nine acre land. During the 1950s, after the accession of the state of Hyderabad, a bench of the Supreme Court too functioned from the High Court with the help of Urdu language experts because during the Nizam rule, Urdu was the main medium of communication in the courts,” MA Qayoom, a city-based historian, tells #KhabarLive .

During the silver jubilee celebrations of the High Court building in 1944, a silver model of the structure built in 300 kg of silver was presented to the Nizam by the judiciary, and this is now preserved in the Nizam’s museum in Purani Haveli.

ALSO READ:  Whose Influence Is Stronger On Kid's Language - Mom Or Dad?

Speaking to #KhabarLive, Mohammad Safiullah, a city-based historian, explains one of the most salient features of the structure. “The Hyderabad High Court was one of the first High Courts to be set up in any princely state of India. In addition to having a unique Osmanian architectural style, the Hyderabad High Court has the largest, biggest and the highest Indo -Sarcenic arch anywhere. It is even much larger than the Buland Darwaza at Fatehpur Sikri, Agra, India,” he says. The main building of the High Court was built in 1919 in order to accommodate six judges. The number then rose to 12 after Andhra Pradesh was formed in 1956. The infrastructure was inadequate to accommodate the existing staff in the building, so additional buildings were constructed in 1958-59.

The High Court building has survived the test of time. On 31 August 2009, a major fire gutted the court library and even though it is said that none of the court reports was damaged, journals from England, law reports and a life-size portrait of the Nizam were burnt in the fire.

Safiullah says that a judicial system was in place in Hyderabad even before the High Court was established in 1919.

“The High Court was situated in five locations before it moved to the current building. A number of factors like flood, epidemic and bad infrastructure led way to the building of the present structure. The High Court here has provided its services to people of three states – the Hyderabad state during the Nizam era, united Andhra and now for the state of Telangana. An efficient judicial system was in place even during the late 1890s when Sir Salar Jung was the Prime Minister of the state. The judges were then appointed by the Hukum (the Nizam) and were governed by the Civil Service Rules,” Safiullah adds. #KhabarLive Has KCR’s Push For A `Third Front` Backfired Drastically?

Exploring The ‘Outer Ramparts’ Of Golconda Fort In Hyderabad