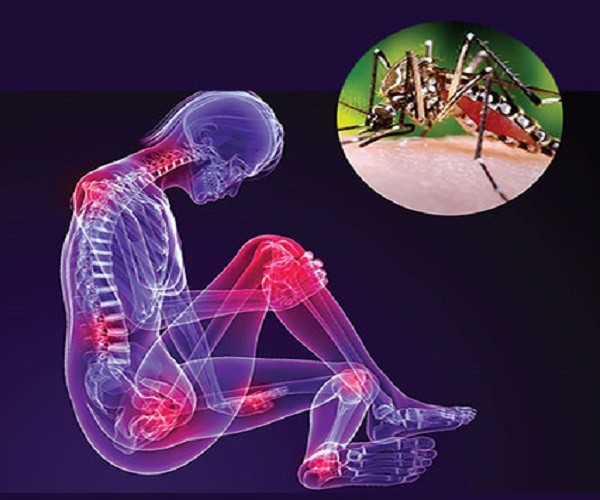 It is the time of viral fevers and for over a decade now ever since the epidemic of Chikungunya struck in India, the virus has been prevalent, ready to pop up its head during the monsoon. It finds a friend in the Aedes aegypti mosquito in the day time — a virus that looks for prey while flourishing in stagnant waters.

The mosquito finds its way to the new human host and buries the virus into the blood stream even as it takes away the nutrition that it requires for its survival. There is a sudden spike of fever reaching to 102F with severe weakness and prostrating the affected individual. The patient seems to break out of fever in no time either to get a sudden spike again as in Dengue or remain calm but the weakness and the fatigue never seems to go away.

But, what remains is the severe joint ache. More often than not, it is symmetrical. If a joint on one side of the body is affected, very easily the other side gets affected too, accompanied by swelling. It is so debilitating that the patient has difficulty in slightest motion.

Morning stiffness
The characteristic of this arthralgia is the typical morning stiffness. As the very name Chikungunya translates, ‘that which bends up’ and no wonder the stiffness in the morning is bad enough to make the person to walk with a hunched back or seemingly protect the affected joint from further injury. It seems to radiate to other joints of the body.

What is worse is that the pain is not just related to the joint but even the muscles of the body are so affected that there is a spasm and soreness of the muscles which make way to cramps and worsening the pain on slightest motion. The wrists and ankles, rich in tendons, are also affected, thereby causing a severe pain even when trying to hold or twist things or plant weight on the ground through the feet.

The fingers seem to give way and when the arthralgia is bad, the patient finds even signing an important document an arduous task.

Hibernation of arthritis
The fever goes away in no time but the arthritis seems to remain for days, weeks, months or even a couple of years. What seems to happen is that when the body seems to have got its hold on the virus, these tend to hibernate in the cartilages and other joint areas of the body.

The immune system produces enough antibodies to neutralise the virus. But, the antibodies seem to attack the locomotor system leading to arthritis-like symptoms.

It could mimic Rheumatoid arthritis where the pain in the joints is similar but usually ruled out by a blood test for that condition. It could look like gout but when blood test for uric acid is done and if it remains normal, there would be no confusion. It could also mimic polyarthritis but other tests for inflammation like CRP help rule them out.

Many conditions like Psoriatic arthritis, etc., look same but other blood tests like anti CCP antibodies and ANA are done to narrow down on to them.

Remedies
Homoeopathic medicine has good remedies for this painful malady. Remedies like Eupatorium perf give the initial relief while Bryonia and Rhus tox give a more sustained relief. When the ligaments and tendons are affected, Ruta and Calcarea flour are more pertinent to the condition.

If the smaller joints are affected, Actea spicata and Caulophyllum do the trick. When the ankles are affected, Rhododendron and Pulsatilla find more say. Gaultheria, Stellaria, and Piper methysticum are suggested to the patients to give them as much relief as possible at the earliest.

To see that this viral arthralgia of Chikungunya does not debilitate a person beyond days or weeks, homoeopathic remedies are the best solution. #KhabarLive

NRI S Saidi Reddy also threw his hat into the ring to contest from the constituency and is working for the development of the area for some time now. In Choppadandi, TRS SC Cell president Sunke Ravishankar is aspiring for an MLA ticket, while another leader Gajjela Swamy is also testing his luck. TRS BC Cell president Muta Gopal and Corporator Srinivas Reddy are competing for the Musheerabad ticket. #KhabarLive