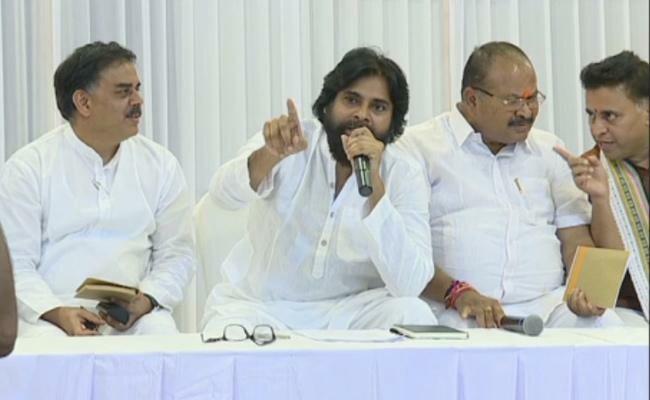 The Bharatiya Janata Party leaders of Andhra Pradesh, who have been looking for a political ally in Andhra Pradesh after the Telugu Desam Party walked out of the alliance with it, are too happy to find a new ally in Jana Sena Party led by actor Pawan Kalyan.

They were aware that though YSR Congress party president Y S Jagan Mohan Reddy wants to maintain friendly relationship with the Centre, does not want to have any attachment with the BJP in the state unlike TDP president N Chandrababu Naidu who was its alliance partner till recently. Jagan wants to be an independent political force with no strings attached.

The BJP leaders, who had developed hatred towards Naidu after he joined hands with the Congress against Prime Minister Narendra Modi, were apprehensive that the TDP chief might knock the doors of the BJP again after the recent loss. Under any circumstances, they do not want to entertain Naidu again.

It was evident from the comments made by the BJP leaders in the post-alliance talk press meet. BJP general secretary in-charge of Andhra affairs Sunil Deodhar asserted that there was no question of entertaining the TDP at all.

He said Jana Sena would be the only alliance partner of the BJP and that there was no question of having any understanding with the TDP in any manner.

He alleged that both Naidu and Jagan had failed to provide good governance to the state.

BJP national spokesman G V L Narasimha Rao also said the TDP had been sending feelers to the BJP for quite some time.

“But we have no relations whatsoever with the TDP as well as the YSRC. We shall emerge as a political alternative to both these parties,” he said.

He had later merged his party with the Congress and became Union minister. He was then elected to the Rajya Sabha. Thus, he was a party president, MLA, Union Minister and Rajya Sabha member, all in a span of five years.

But, unfortunately, Pawan Kalyan failed at every stage. His party lost and he himself lost at the two places where he contested.

He shared the dais with Narendra Modi, the Prime Minister candidate in 2014 and travelled with Modi in the flight and helicopter all through.

Now, he had to share the dais with BJP state unit president Kanna Lakshminarayana, when he went back to the BJP, seeking alliance.

He was received by two Ministers at the Gannavaram airport and the chief minister (Chandrababu Naidu) waited for him outside his chambers to receive him.

This happened four years ago. He was the darling of Narendra Modi and the blue eyed boy of Chandrababu Naidu.

Things did not work well for him and he had to align with the Left parties in the 2019 unsuccessful elections.

Now, he would be at the mercy of the AP BJP chief to make any statement or hold any event henceforth, strictly following the alliance dharma.

“Will Lotus blossom in “Glass” or can Glass take the weight of the Lotus? This is the question with the BJP and the Jana Sena forging alliance in Andhra Pradesh.

As the leaders of the two parties met in a hotel in Vijayawada, the discussion was around this question in the political corridors. Who will benefit from this alliance had become the major question.

Will Lotus Blossom in Glass?
The BJP has no footing in the State except a handful of votes in every village.

The party had no record of winning any election in the State except one corporator in Vijayawada Municipal Corporation in the 1980s.

ALSO READ:  Seriously, India Need Strict 'Food Policies' To Ensure Not To 'Get Sick' Before 'Get Rich'

Dogiparthi Jhansilakshmi had won as coporator from the One Town area of Vijayawada in those days on BJP symbol and there was no one elected even as ward members in gram panchayats.

Even now, the party’s position is the same. It cannot win even a single gram panchayat, if they contest the local body elections.

The fate of the Jana Sena is no different. The party could not win the election, except one MLA in East Godavari district.

Rapaka Varaprasad had won the election and most of it is because of his own image and following rather than the vote base of the Jana Sena.

The party chief, Pawan Kalyan, himself had lost the election at two places – Bhimavaram in West Godavari and Gajuwaka in Visakhapatnam. His brother, Nagababu, too had lost the Narasapuram Lok Sabha election.

The two parties have not seen the victory on their own, with the above exceptions. To be positive, the Jana Sena is placed better in terms of vote bank, than the BJP in the State.

Now, with the two parties coming together with an eye on the 2024 general elections, the big question is which party will benefit from the alliance!

It is good if either of the parties reap the benefit. But, what if the alliance benefit the YSR Congress and destroy the TDP at the grassroots?

The ongoing discussions between leaders of Bharatiya Janata Party and Jana Sena Party in Andhra Pradesh as part of political realignment have raised an interesting discussion in political and media circles.

The point of discussion is whether this new alliance would make any difference to the existing political parties in the state or bring about a larger change in the political equations in the state.

Whom will BJP-Jana Sena combo benefit?
More than seven and a half months ago, YSR Congress party led by chief minister Y S Jagan Mohan Reddy came to power with a massive mandate, reducing the Telugu Desam Party led by N Chandrababu Naidu to an insignificant position with just 23 MLAs and three MPs.

Even among these 23 MLAs, two of them have already directly or indirectly switched over to the YSRC and at least two to three MLAs are likely to follow the suit.

Among the other opposition parties, the BJP and Jana Sena were completely decimated in the elections and the Congress has lost its presence in the state with a vote share less than the votes polled under NOTA.

While the BJP has drawn a blank, Jana Sena had won just one MLA seat, though it got nearly 7 per cent votes, but even that MLA is all set to defect to the YSRC.

After a gap of nearly seven months, the political activity has picked up again and the opposition parties badly mutilated in the last elections are now planning to regain their strength through political realignment.

The TDP, which had fought with the support of the BJP in 2014, tried to send friendly signals to the BJP, the saffron party has shut the doors on it.

Having no other option, Naidu has now joined hands with the Communist parties to fight for retaining the capital city at Amaravati.

On the other hand, Pawan Kalyan who opposed the BJP in the elections and indirectly maintained friendly equations with the TDP, has changed his track and is now aligning with the BJP.

This would mean, there is going to be a triangular fight in the next elections unless there are further changes in the political equations.

While it will be a virtual lone fight for the TDP (the Communists have relevance in electoral politics), the BJP-Jana Sena combination is expected to gain some strength because of the charisma of Pawan and cadre base of the BJP.

However, the combination will split the anti-establishment vote in a big way and it will ruin whatever little chances the TDP has to bounce back.

“Ultimately, it will be advantageous to the YSR Congress party, unless there is a radical shift in the YSRC vote bank to the TDP,” an analyst said. #KhabarLive

Making Of ‘Safety Pins’ Is Not ‘Safe’ Anymore For Traditional Hyderabadi...

Why ‘Telugu Desam Party’ Not To Contest ‘Lok Sabha Elections’ In...

‘When A Train Bogey Became The Classroom’ – Meet The Creative...