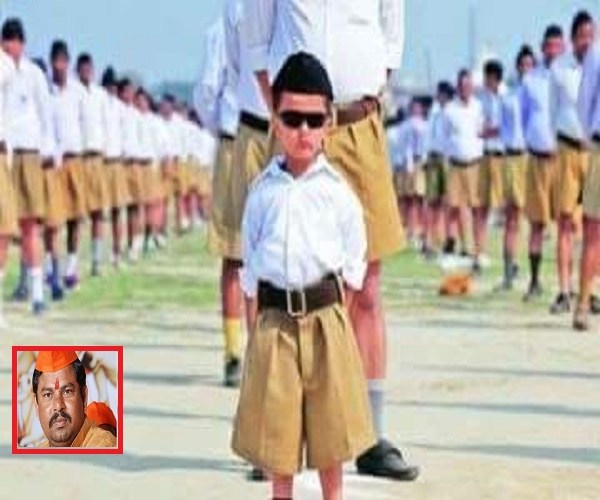 In a dramatic mood, Goshamahal Constituency BJP MLA Raja Singh from Hyderabad has announced the creation of a vigilante army to ‘deal with’ traitors and ‘send them to hell’. In two videos released, the always-controversial, often-bigoted legislator proudly claimed that he is currently holding a conference discussing the formation of this vigilante army.

Raja Singh in his video said, “Six months back, we had planned a camp, decided on a date, and invited Hinduvadi bravehearts and patriots to attend the camp.

There’s a great discussion underway at this camp (now). A pledge has been taken at this camp that every youngster in India will be trained to become a soldier; India is safe because of our Army, similarly the Indian youth will be readied like an Army soldier.

If India needs it in the coming days, the Indian youngsters should not fall behind. The Army is taking care of traitors on the outside. But there should also be an army to take care of the terrorists inside the house right? So that army is now being readied.”

“This army will be created in every corner of India. In the coming days, whichever traitor is hidden inside India, will be dragged out and worn down, and sent outside India – or even directly to Jahannum (hell),” Raja Singh threatened, “This is our pledge, this is our programme.”

“This programme will go on for seven more days, and we will continue to have great discussions,” he said, hinting that this diabolical vigilante army was only the beginning of his anti-national activities.

ALSO READ:  'From Darkness to Light' - An #OpenLetter To 'Pradhan Mantri'

In another video released on the same day, he said, “We have a determination/commitment towards Hindu rashtra, for this Hindu rashtra, we need an army. How can this army be formed? All over India, we are forming an army for Hindu rashtra, the protection of dharma and the nation. For this, there’s a ten day camp for which we have come to Bengaluru.”

While one of the videos was uploaded to his Facebook page, the other was shared through WhatsApp.

The exact location of this camp in Bengaluru is unclear. When #KhabarLive asked Raja Singh, he refused to divulge the location, but said that 470 people were participating in the event and that the camp would continue till September 24.

As per his latest election affidavit, Raja Singh has 43 police cases against him.

Recently, the Ghoshamahal MLA tried to stoke communal tensions in Hyderabad, when he tried erecting a huge statue of freedom fighter Rani Avanti Bai at Jumerat Bazar without permission from the authorities. The incident led to tension in the area. Initially the BJP claimed that police lathicharged the BJP supporters, leaving Raja Singh injured. However, a video showing the MLA hitting himself with a stone busted their claim. #KhabarLive

‘Stitch In Time Save Nine’ – Cautious AIMIM Intersperses Candidates In...

Why TRS Luring Telangana Congress MLAs With A Bouquet Of Rewards?