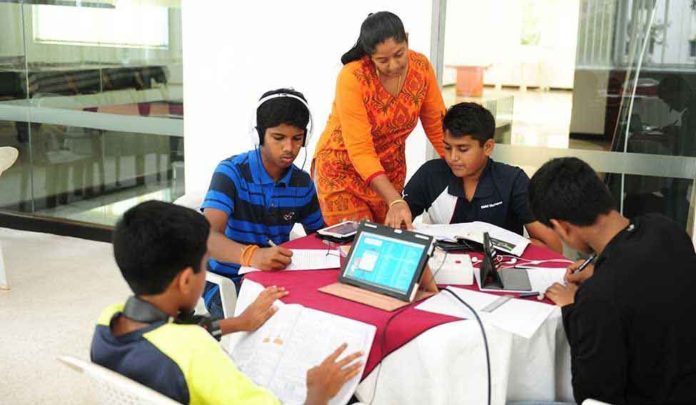 Never before have more students, including kindergarteners, attended private tuitions in India—it’s already a multibillion-dollar industry

Just a few kilometres from the skyscrapers of the Bandra-Kurla Complex—Mumbai’s tony work district—lies Bharat Nagar, a sprawl of tenements interlaced with narrow stone lanes and potholed roads. The houses are small; thick electric cables hang low, and spiral metal stairs lead up to mezzanine floors with tailoring units. In the afternoon, the comforting smell of frying potatoes keeps the children inside. The rest of the time, their tuition teachers do the job.

Eight-year-old Chandni Ansari is a class V student of an Urdu-medium municipal school. She attends Arabic classes after school and, starting last year, “Nasreen ma’am’s” tuitions across the road from her home. The fifth among six children, Chandni goes over Urdu, Marathi and Hindi lessons for a few hours every evening, Monday to Saturday, at 33-year-old Nasreen Shaikh’s home before dashing off for Arabic lessons on all days of the week other than Fridays. At home, elder siblings Sohail, a class XI student of Rizvi College, an English-medium institution, and Rukhsar, a class VIII student of an Urdu-medium private school, ask her questions about her homework.

“The day Chandni wants to play, she calls me and tells me she has a headache,” laughs Nasreen. We’re all sitting in her single-room home, large by tenement standards. Chandni has just finished reciting a poem in Urdu about the Ganga while her mother, Ameena Ansari, a homemaker, looks on proudly. “I like my tuition classes best. She doesn’t hit us,” Chandni says, shyly. When asked what her favourite subject in school is, she pipes up. “Math! Because sir gave me ‘good’.”

Rukhsar, Chandni’s elder sister, attends tuitions too. Her teacher is 27-year-old Nafisa Shaikh, who lives across the road from Nasreen. A trained beautician, Nafisa began to offer tuitions after marriage since her in-laws didn’t want her to work outside the house. Students as young as kindergarteners come to her. Her oldest students are in class VIII. Like Nasreen, she focuses on diction, reading and comprehension in the languages. Several students are from Bharat Nagar itself and attend municipal schools.

The Right of Children to Free and Compulsory Education (RTE) Act, 2009, has a mandatory no-detention provision, under which students up to class VIII cannot be failed. The order was meant to check the drop-out rate, but a major fallout, says Nasreen, was that more parents began to send their children to private tuitions to ensure that their education didn’t suffer. What’s more, parents of very young children began to look on private tuition as an alternative and, more importantly, a channel of learning. This no-detention provision having been criticized by several state education departments, the new Draft National Education Policy 2016, up on the Union human resources ministry website for comments till 16 August, proposes that the “no-detention policy will be limited up to class V and the system of detention will be restored at the upper primary stage”.

Nasreen’s claim is borne out by statistics. Never before have more students attended private tuitions in India. A 2013 survey by the Associated Chambers of Commerce and Industry of India (Assocham) pegged the private tuition industry at Rs.1.6 trillion, a 35% increase since 2008.

According to a report by the National Sample Survey Office (NSSO), one out of every four students takes private tuition. That’s an estimated 71 million students. In some states like Tripura and West Bengal, the number is even higher than the national average—three out of four students attend private tuition. The NSSO report on education in India was based on a survey of 66,000 households in 2014, and covered primary, secondary and higher education.

Interestingly, the report also pointed out that children from lower-income-group families access private tuition as much as children from higher-income groups.

That’s a lot of studying, but it begs the question: Are the children learning well?

“The entire academic year passes by and the copies are empty,” says Nasreen. Some of her classes III and IV students are unable to read well or comprehend their textbook lessons. That’s where she steps in, providing personalized attention—bringing each student’s level up from “zero” to “letter” to “word”; “word” to “paragraph”; “paragraph” to “story” and comprehension.

Nasreen, who attended an Urdu-medium school herself, learnt the concept of “reading indicators” from Pratham, a non-government organization that works in the field of education.

Founded in 1995 to provide quality education to children in Mumbai’s slums, Pratham is now active in 21 states. Under its urban programme, Pratham conducts learning camps that are aimed at enhancing the learning levels of children. Each locality is divided into blocks (typically, each block is made up of 250 houses). Bharat Nagar, for instance, has 45 blocks. For each block, Pratham appoints a librarian who is supposed to keep track of all schoolgoing children, assess their learning levels, and ensure that they borrow—and read—books from the Pratham library. These books are in different languages—English, Marathi, Urdu and Hindi—for different levels of learning, and are kept in the librarian’s home. Both Nasreen and Nafisa were librarians of their respective blocks till recently; they joined the NGO last year.

ALSO READ:  From Dabeli To Khandvi: Gujarat Is A 'Street Food' Paradise

I think, at least my children should get the opportunity to study. Knowing the English language is very important, it’s not enough to learn only Marathi.
– Shobha
Since 2005, Pratham has also been coming out with Annual Status of Education Reports (Asers) which assess three main things: Are children enrolled in schools? Can they read? Can they do basic arithmetic? Aser collects data for a representative sample of children from every state and almost every rural district in India. On average, the survey covers over 560 districts and 650,000 children in more than 16,000 villages each year. Their 2014 report, which assessed 577 districts across the country, found that while the enrolment level was near universal, with 96.7% of children registered in schools during 2014, their levels of learning left a lot to be desired. Only 48.1% of the children in class V could read a class II textbook, and only 26.1% of them had the ability to do division; barely 25% could read a simple sentence in English.

While these figures are of students living in rural India, urban children aren’t much better off.

Anita and Francis D’Souza would know. The couple holds private tuitions for students from kindergarten to class IX in their one-room kitchen home in Mumbai’s Santacruz suburb. Classes start at 8.30am and continue till 10pm, and consist predominantly of children from economically weak backgrounds. The D’Souzas have been tutoring on every subject from English and math to social sciences, Marathi, Hindi and science since 2010. Most of their 72 students are enrolled in English-medium private and convent schools.

Their schedule is gruelling, and so are the schedules of their students, who usually spend 2-3 hours at the tuition class.

Parents, too, have a punishing schedule. Shobha Umesh Kamble, a 31-year-old, wakes up at 6am and drops her son Sujan, a class V student, to his convent school by 7am. She then drops off her seven-year-old daughter, Saili, at the D’Souzas by 8.30am. At noon, she picks up her son and drops him home. She then fetches Saili from the D’Souzas’ and takes her to school—the same school as Sujan’s—by 12.30pm (since Saili is a class III student, her school starts in the afternoon). Shobha returns home, cooks food for her husband, a newspaper distributor, and son, and goes off to work as a domestic help. At 4, she drops Sujan off at the D’Souzas for his private tuitions; at 6, she picks up Saili from her school, takes her home, and cooks dinner. She makes one final round at 9pm, to pick up her son from the D’Souzas. Her children have been attending private tuitions since class I. Luckily for Shobha, the school, her home and the tuition classes are in the same neighbourhood.

The Kambles’ earnings are barely enough to pay for their children’s schools (Shobha earns up to Rs.4,500 a month), but she insists that they attend tuitions. “I think, at least my children should get the opportunity to study. Knowing the English language is very important, it’s not enough to learn only Marathi,” says Shobha, who went to a Marathi-medium municipal school.

The D’Souzas charge Rs.300-1,000 as fee, depending on the child’s grade and economic background. “Other tuition classes take money for all 12 months. We just charge for the duration of the school term,” says Francis, 54, who opted for the voluntary retirement scheme at the automobile firm he worked for, in 2010.

“The mahaul at home is very important,” says 47-year-old Anita. According to her, tuition classes help provide the right environment to study. No television, no mobile phone, no distractions, and a sustained pressure to perform well in the midst of peers. For Francis and Anita, their son Savio’s class X marks—94.2%—are enough indication that a good education is not just about what one learns, but how one learns it. They’re big proponents of peer-to-peer study groups, and rote-learning. Francis proudly holds up his son as an example. “I tell them, break his record.” #KhabarLive