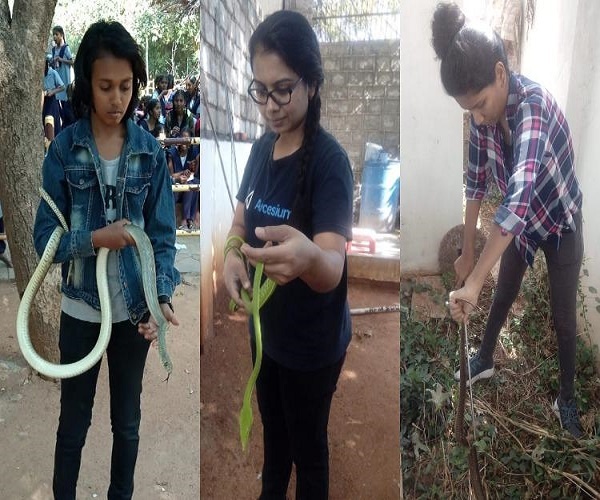 The 26-year-old Darshini is among the 40 odd women who are part of the organisation, and have been trained to handle emergency calls and rescue snakes from any part of the twin cities. Though Darshini is a regular employee with the Orient Cement, she has rescued over 100 snakes in the past 5 years.

You may have heard of Vava Suresh, the famous wildlife conservationist and snake expert from Kerala, who has received umpteen bites from the reptile, has been on the ventilator thrice and still proclaims his unflinching love for snakes. And there are many more men like him in the country who like to engage with snakes and seek to reduce the conflict with humans. But what about women?

“People often ask me why snakes? Why not dogs, cats or other pets? I don’t have an answer, but I have always just been fascinated by this animal. Although I have been handling snakes, I wouldn’t say I have not been afraid of snakes. People think that snake rescuers can sniff out snakes, but to be honest, we really do not have any special powers. I think once people come out of their inhibitions, they will realise snakes are as ordinary as any other animal. They are, in fact, the most shy among animals,” says Darshini, a woman snake conservationist and rescuer working with Friends of Snakes, a Hyderabad-based organisation that rescues and helps with the conservation of snakes.

“Maybe because I was really fascinated by the snakes, I wasn’t scared but was excited when I had my first brush with the animal. In one of my initial training sessions, I was asked to pick a snake from a muddy trough. There were some 10 snakes in the water and I literally had to shove my hand down and catch a snake by its head. I was quite freaked out, but eventually, it just became a part of my job,” Darshini recounts.

For 21-year-old Shanti Pillai, nature has always been a mystery. It was through a rescue operation that happened in a bakery close to her house that Shanti says she fell in love with snakes. She is now an active member of Friends of Snakes.

“I was in my second year of graduation when I started going out for rescue operations. It was through a friend, who was also part of the organisation, that I learnt more about snakes and today, almost after a year, I have been a part of a god number of rescue operations from different parts of the city,” says Shanti.

‘Can a woman tame the reptile’?

For these women, who come from myriad backgrounds, fighting resistance from family is secondary to the sexism they fight every day on the job. Most of the women say that they have often been sent back from sites of rescue operations because people do not trust a woman to handle the reptile.

“Many a times, when people see that it’s a woman who has come to rescue the animal, it takes us a while to convince them that a woman can also do the job. And quite a few times, people have sent me back, asking for a man instead, since they believe he would be better suited for the job. ‘We cannot take this woman to the hospital if something happens to her’ is the stereotypical dialogue we hear very often at a rescue site,” says Akansha, a 19-year-old working with the organisation.

For Akansha, who hails from an orthodox Brahmin family, it wasn’t easy to convince her parents.

“When I told my family that I wanted to work for the conservation of snakes, they were shocked. They told me I am a girl and I am not supposed to do this job. But can a snake differentiate between a man or a woman touching it? No! Snakes are misunderstood creatures. When a cat or a dog enters your home, no one thinks of killing them. But if you are to spot a snake, the immediate instinct is to kill it. People are often discouraging when they see that a woman is doing the job. But yeah, being a woman, I also don’t think that it’s a feat that I am accomplishing. At the end of the day, I am just doing something that is close to my heart,” Akansha says.

On the other hand, Darshini says that more than fighting sexism on the job, it’s the crowd that gathers at a rescue site that is more difficult to handle.

“I do not ride a bike and I ride around the city on a cycle. Once I was at a basti rescuing the reptile, and the moment I came outside the home after the rescue, I could only sense camera lens flashing at me. Even though people say they dread the animal, they are equally curious to see what’s inside the bag, and how well a woman who roams around in a cycle has fared! I am quite camera-phobic and it took me a while to keep the crowd under control,” Darshini explains, adding, “I come from a family where my grandmother would refuse to touch vegetables if she found worms in them. But now that my parents see that I am doing absolutely fine at my job, I have finally managed to convince them to come visit our organisation and have even got them acquainted with snakes.”

In a country like India, where the snake is believed to be an aide of god and is even worshiped during festivals, snake conservationists have a tough time busting snake-related myths. The biggest myth, they say, is the age-old ritual of serving snakes milk, especially during the Nag Panchami festival.

“There are many myths and misconceptions about snakes. One of the biggest myths is that snakes dance to the music of the flute of a snake charmer and that they drink milk. But the truth is that the snake charmers pull out the fang and starve snakes for days together before the festival. And finally, when the reptile is served milk, it drinks it just because it is hungry. For that matter, a snake might as well drink Coke if it is starved to death,” opines Shanti.

And these women say that while they have been able to convince others about the lack of logic in the myths that surround the reptile, it has been most difficult to do the same with their own families.

“Many believe that snakes hold vengeance, while they are a species with absolutely no memory! Many believe snakes help in digging treasure while some say they are godly incarnations. We have been able to bust many of these myths through our awareness classes, but when it comes to our own family, I have still not being able to convince them to disbelieve many of the myths, which they hold close to their religious beliefs,” Akansha says.

‘We do not have any special powers’

“We do not have any special powers and we cannot sniff snakes out of a home. We can handle snakes because we are trained to do so,” says Darshini.

Even though these women have been part of over 100 rescue operations by now, they say that there have been times when they have been scared and have sought help from outside.

“I was once at a rescue op and I got scared as I realised that I was rescuing a Russell’s Viper. The situation went out of control and the snake jumped onto a tree bark, and I could see its venom dripping on the bark. My colleague soon came to my rescue and handled the situation, but the sight of the venomous snake gave me sleepless nights for over a week,” shares Akansha.

While most of them handle 2-3 operations a day, on some days the count can go up to 6. “On certain days, we get over 150 calls from different parts of the city. And there have been days when we have spent over 5-6 hours unable to trace where the reptile is hiding,” Darshini says.

All the women attribute their success at the job to the organisation, which they say, has been pushing for more women to join the profession.

“While there may be some challenges as a female volunteer while out on a rescue, never once have I or for that matter, any of the female volunteers, faced any divide internally. We owe a large chunk of our achievement to our male counterparts and the great camaraderie, guidance, and support extended to us, as part of the FOS family,” adds Darshini. #KhabarLive

Will KCR’s Strategy Of ‘One Leg In Two Boats’ Backfire In...

Why ‘Telangana University’ Student Being Accused Of Meeting Naxalites During A...