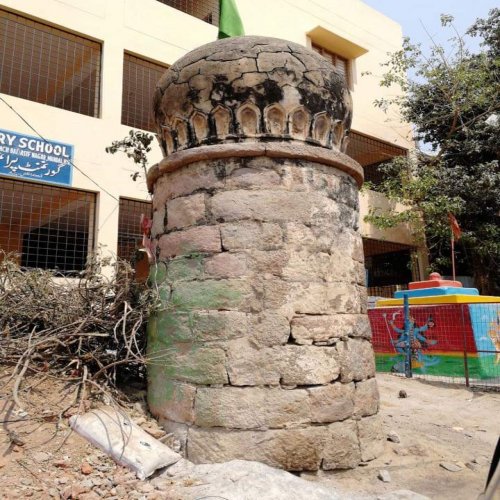 The ‘Kos’ minar in Kulsumpura changes the geographical concept of the city. This historic Kos Minar at Kulsumpura in Old City of Hyderabad may soon disappear if no conservation measures are taken at the earliest. It is one of the only two surviving Kos Minars of Qutub Shahi era. Encroachments around the Kos Minar have robbed the structure of its beauty, while lack of maintenance for decades has weakened it.

This is perhaps the last kos minar in Hyderabad. It marks a distance of one kos or approximately 2 miles from Golconda fort.

Unmarked, unprotected and surrounded by a small temple and a newly-minted school, the kos minar near Kulsumpura Masjid appears as if it might disappear any day. Circular in shape with perfectly dressed grey granite stones, plastered with lime it still has stucco work on the top though the finial has disappeared.

“It is a gumbad (dome); there are others like this in the city,” says a flower vendor near the kos minar. The kos minar indeed appears like a minaret, albeit shorter and wider at the base. American academic and scholar Robert Simpkins who did a study on these mile markers thinks they marked the distance between the port city of Machilipatnam and Golconda. He also dates them from the early part of Qutb Shahi rule.

Today only one Kos Minar survives in Hyderabad. The other one in Nalgonda district has also become weak and is crying for attention. The Kos Minar at Kulsumpura is incidentally the first milestone from Golconda fort, which completes 500 years of its construction on December 27. It represented the grand old Caravan route of yore.

The last of the Kos Minars, one of the few surviving relics of the Qutub Shahi era, is in a bad state of neglect. Built of granite stone and lime mortar with stucco work, the Kulsumpura Kos Minar represents the unique Qutub Shahi style of architecture. Much of the stucco has been lost and chips of mortar are falling off exposing the granite stones.
When Gabbar Singh says “yehan se pachas pachas kos dur gaon mein…” he refers to the distance measured in ‘kos’ which was used by Mughals to measure distances and mark roads. But the kos minars were not the sole preserve of Mughals as can be seen from the one in Kulsumpura area.

Kos Minars of the Qutub Shahis are different from those of the Mughal rulers, explains INTACH city convener P Anuradha Reddy. “Qutub Shahi Kos Minars are short and they are always in pairs unlike those found in the north. They were constructed on either side of the Golconda-Machilipatnam highroad a Kos apart. The Qutub Shahis also redefined Kos and other units of distance,” she said, emphasising the need to conserve the last of Kos Minars in Hyderabad.

ALSO READ:  'Extraordinary' Stories Of The 'Ordinary People' In 'Humans Of Hyderabad'

Kos Minar of Kulsumpura is more than a unit of distance. It reflects the grandeur of Qutub Shahis and the number of foreign travellers and traders Hyderabad of yore had attracted thanks to its booming diamond and pearl business those days, Anuradha Reddy told #KhabarLive. Most of the Kos Minars were demolished during widening of Hyderabad-Vijayawada highway.

The glory of Qutb Shahi rule in Hyderabad has been erased due to multiple invasions and by ravages of time. Simpkins refers to other kos minars within the city and on the way to the seashore. Now most of them are untraceable. This kos minar survives till date, a remnant of the glorious era. Unfortunately, there is no perfect way to date the marker as nothing is written on it. Same is not the case with a land marker from a different era which exists in Gowliguda area. The stone which has been freshly painted yellow by residents has an inscription that reads: Ilaqa, Bait-e-Nawab Salar Jung.

The stone marker changes the geographical concept of the city where it is assumed that the devdi of Salar Jung near Madina was the only residential premises of the prime minister who stabilised the Asaf Jah rule during the tumultuous years leading up to 1857 War of Independence. Overrun by modern development and greed, all the signs of an earlier leisurely era are disappearing from the city. According to the residents in the area, the devdi of Salar Jung was the first to be electrified with 110 Volt DC with the cables running underground. Inside the vast devdi was a lake that was used for rowing and swimming.

Today, defaced by countless billboards strung up to promote various political parties, innerwear and clothes, only parts of the kaman (arch) are visible. It is difficult to imagine that the area of the house of Salar Jung extended across the Musi up to Gowliguda. But it did.

Golconda and Hyderabad were subject to waves of invasions from the time it was founded sometime in 1518. Mughal emperor Aurangzeb supervised four of these attacks on Hyderabad, aimed at stripping bare one of the most fabulous kingdoms of its time. The Marathas too made predatory raids on Hyderabad. These raids are one of the reasons why medieval Hyderabad or Golconda have not been preserved in any recognisable form. What we know is a surmise and from history.

But at the pace at which the city is growing and the ilaqas, devdis, bowlis, baghs and kuntas are disappearing, very soon there will be no connect between the medieval city founded in the 6th and 17th centuries and the current one being built by bulldozing history as well as geography of the area. #KhabarLive #hydnews #innlive

An Oldest ‘Book Store’ In Old City Of Hyderabad With A...