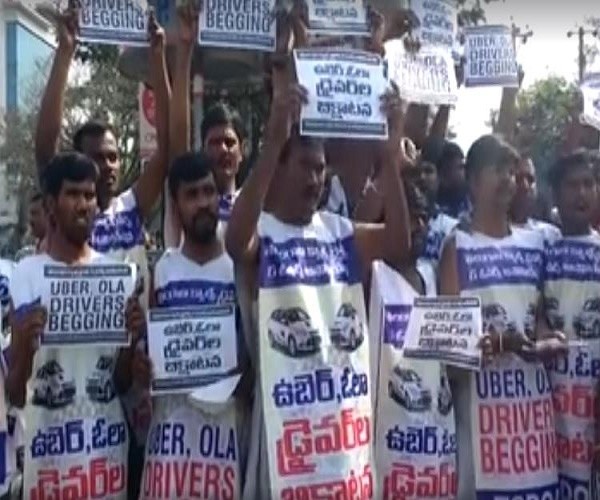 Drivers employed by cab aggregators like Ola and Uber have called for a strike across the country on Monday claiming that the companies are underpaying the drivers and making it difficult for them to make a living. Following the nationwide call for a strike, the Four Wheeler’s Association, a union of cab drivers in Hyderabad, have also called for a ‘Gandhigiri bandh’ – a voluntary strike – in the city.

The cab drivers stated that Ola and Uber had initially promised that their monthly income would come up to Rs 1 to 1.5 lakh. However, drivers have alleged that the companies have failed to keep their promise and they only receive a marginal amount of the total fare a customer pays. Drivers have alleged that based on this assurance, they bought vehicles through loans and now are unable to repay the loans.

Detailing their plight, the coordinator of the strike, Shaik Salauddin said that they would give a representation to the Transport Commissioner. According to Salauddin, Hyderabad has a total of 1,50,000 cab drivers, many of whom have agreed to stay off the roads in solidarity with the protesting cab drivers in the national capital.

Speaking to #KhabarLive, he said, “We are unable to pay our EMIs because the companies are not providing the payment they assured us of. They made us believe that we would be making enough money, but those were false promises.”

“Our strike would be in a ‘Gandhigiri’ style. It is a partial strike. Many drivers have desisted from working today, while a few others, who have targets to meet, are providing the service. We didn’t call for a total strike,” Salauddin added.

The demands of the protesting cab drivers include higher fares from Ola and Uber and other taxi aggregators, an increase in the base fare to Rs 17 per km, a cap on new cars and reinstating drivers who were off-boarded.

Besides these demands, the drivers have also asked for cab aggregators to ensure a KYC (know your customer) approval of customers to prevent assaults on drivers and companies taking up the responsibility of the safety of the drivers and providing them security at the workplace.

#KhabarLive reached out to both Ola and Uber for their statements, while Ola declined to comment on the issue. Uber in its response said that they are not seeing any disruption in services in Hyderabad. #KhabarLive

Muslims Are ‘Out Of Reckoning’ In ‘Poll-Bound States’ Far Away From...

Why This TRS ‘MLA’ Ran Away From Election Campaigning In ‘Bhongir...